Over 100 lorries take part in Donegal protest against hard border

Truck convoy involved drivers from both sides of the border 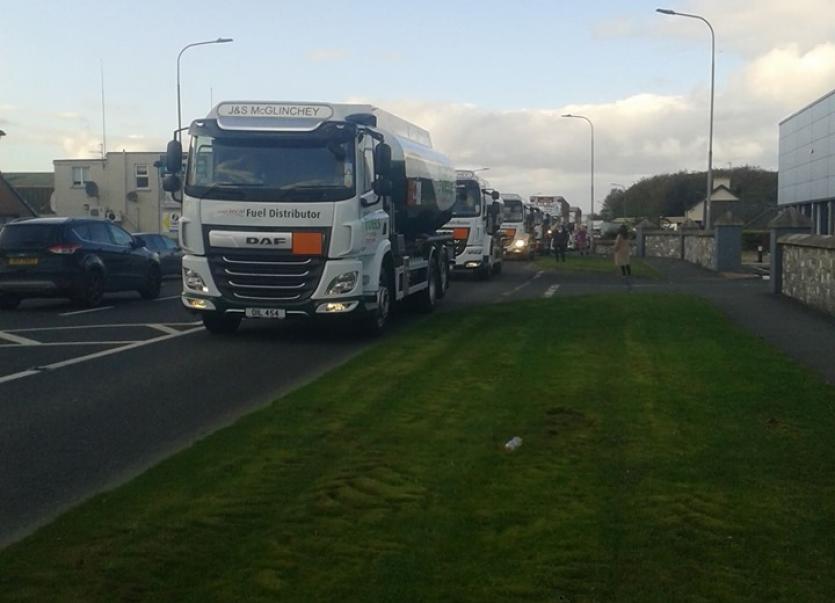 Over 100 lorries have taken part in a cross-border protest in Donegal highlighting the need for an open border to remain in Ireland.

The protest was held on the border between Donegal and Derry this afternoon.

The lorries travelled from both sides of the border to the village of Bridgend.

The truck convoy was aimed at showing what impact a hard border would have.

Gardaí and the PSNI managed traffic as the lorries used roundabouts on both sides of the border to make passes through the village.

Members of the public also gathered to support the convoy, he said.

“It was incredible cross-border cooperation,” he said.

“We thought the public might get a wee bit annoyed but they seemed to be supportive as the public do not like Brexit either,” he said.

“It was totally non-political. The point was to demonstrate to the world that we are fed up. The Brexiteers keep talking about the Irish border not being a problem and that it only accounts for 2% of trade. But it accounts for 100% of our trade. We do not like being collateral damage in their fantasy.

“Everything that comes into here comes through Derry or Belfast port - oil, coal, gas, timber, fertiliser, animal feed. Every gram of cement that comes to Donegal crosses the border twice.

“Integrated trade and commerce has been one of the biggest contributors to the peace process. It allowed people to work together, do business together and get to know each other.”