Loreto, Milford are Donegal Schools’ champions after win over Abbey 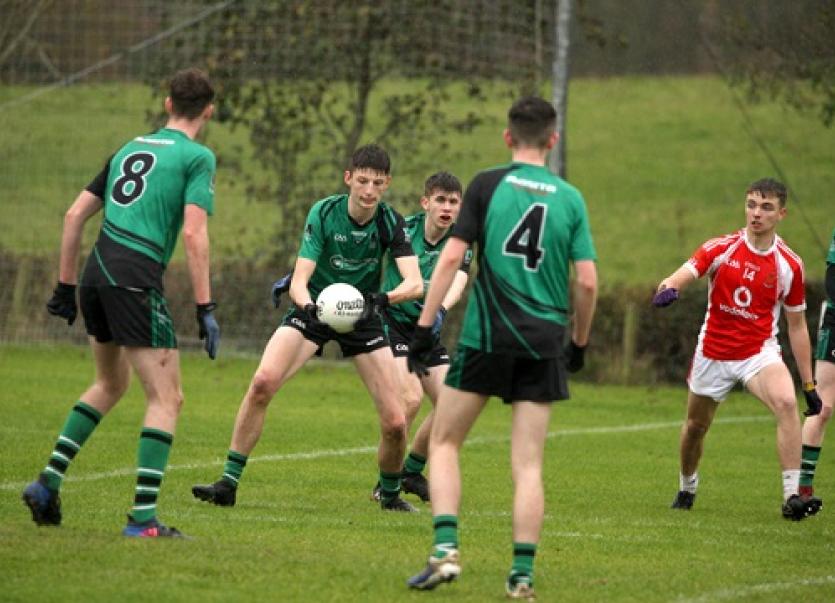 Action from the Senior Schools final between Abbey VS and Milford CS Picture: Thomas Gallagher

In the proverbial game of two halves, the driving wind and rain was a factor as Abbey had the better of the first half exchanges and Milford dominated the second period.

It was a four point game  at half-time. Abbey led 0-8 to 0-4 with Alex McCalmont, Shay Travers, Senan Quinn, Thomas White and Ultan O’Grady among their scorers.

Corner-forward Aaron Reid hit three of the Loreto points with Johnny McGroddy chipping in with the other.

Abbey, the reigning champions, played with a strong  breeze at their backs in the first half and got off to a flying start with three quick points inside five minutes to Loreto’s one.

Aaron Reid, with a fine strike, opened the scoring on two minutes but the Abbey response was fairly swift with  Ultan O’Grady, McCalmont and Shay Travers (from a close-in free) splitting the posts.

Reid kept the Milford boys in touch with two well taken points either side of second  McCalmont score. And when McGroddy pointed his first of the day, the margin was down to one in the early seconds of the second quarter.

But with Richard O’Rourke and McCalmont stepping up Abbey finished the half on top and thanks to points from Thomas White, Shay Travers and McCalmont they led by double scores at half-time.

Loreto were a transformed side in the second half and with Rory O’ Donnell and Johnny McGroddy taking the game to Abbey, they dominated for most of the half.

Thanks to two points from McGroddy and O’Donnell, Loreto had drawn level by the 42nd minute.

And from the moment Liam McGrenaghan kicked them ahead on 48 minutes they had the look of winners about them. Abbey struggled against the wind and driving rain in the second half and went 24 minutes before Shay Travers kicked their ony point of the second half.

The full-forward converted a close in free from out on the right hand side.

By that stage Loretto had 11 points in the board.

The two teams will now advance to play in the Ulster Schools McLarnon Cup.