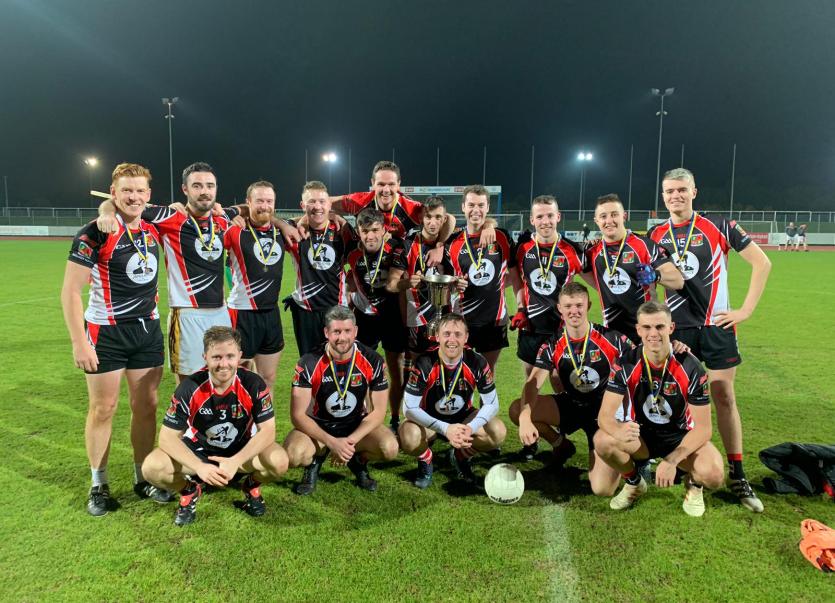 When Fearghal McKiernan replaced Timmy Goverov on the Bundoran team defeated by Kilcar in the 2017 Donegal senior championship quarter-final, he could have been forgiven that it was his swansong on a Gaelic football field.
Fast forward to Saturday last and McKiernan was picking up a European senior club medal with his new found Gaelic friends in Madrid.
The former Realt Na Mara player was part of the Madrid Harps team which were successful at the 11-a-side finals played in Vienna, defeating favourites Warsaw in the final by 0-9 to 0-7.
McKiernan was one of three Donegal players on the Madrid panel, who fielded A and B teams in the European finals day. The other Donegal players involved were Eoghan Kelly from Carndonagh and Eoin Slevin of Four Masters.
After commuting from Dublin to play for Bundoran for many years, McKiernan moved to Madrid last year after marrying his Spanish bride Alejandra Hernández.
And like many other Irish abroad, contact was made with the local Irish community, for which the James Joyce Pub is the focal point.
Madrid Harps have been in existence for quite a few years and have established themselves as the strongest team in Spain, winning the last six championships in-a-row, fielding male and female teams and sometimes two teams in each competition, with around 100 members.
"The strong clubs are Madrid, Barcelona, Valencia and Galcia," says Fearghal, with about 20 clubs in all in Spain.
"Because of the heat, most of the competitions would run in the early part of the year from January/February to May or June," he said, with each of those clubs hosting one-day events and then the top two teams would qualify for the Iberian finals, which were held this year in Barcelona.
"I started playing straight away (when I came here), kinda to get to know people and for the social aspect as well. It's the same as everywhere in the world; you might have people that have not played that much Gaelic football back home, will throw their hat in the ring to have that Irish culture aspect, to meet up on a Saturday morning.
"Then a lot of people take it quite seriously; I'm only here one year but the club had a very good winning mentality. You would have students coming here for one or two years' study," said Fearghal.
"The team last year got to the semi-final at the European finals but were beaten in the semi-finals by Warsaw."
On Saturday last they played their first game at 9.30 in the morning against Amsterdam "who would be a really, really strong club, having been in European finals before. We managed to beat them by a single point with the last kick of the game.
"We then beat Belgium, which would be a Brussels based team and we beat Paris in the last game of the group, which saw us top the group to get into the semi-final against Luxembourg.
"Again, they would be quite renowned for having a strong Irish side. We beat them by quite a bit to get to the final against the favourites, Warsaw. They have a lot of Irish students; I think there is a medical university and a vet college as well. They normally are quite strong, but we held out to win," said Fearghal.
Ironically, Fearghal wasn't the only McKiernan playing at the European finals on Saturday. His brother, Rossa, was on the Louvain team which were taking part in the European Intermediate Championship. "They were struggling with numbers this year so they dropped down to the Intermediate. They got to the semi-finals and I got to watch that match before our final," said Fearghal.
The European finals also featured Ladies Gaelic football and Madrid Harps got to the semi-final of that competition.
The winning Madrid Harps team have been invited to a gala evening at the Irish Ambassador's residence to celebrate the achievement.
The club's next aim is to compete in and win the 15-a-side tournament next summer with the winners set to represent Europe in the Leinster Junior All-Ireland Club Championship.