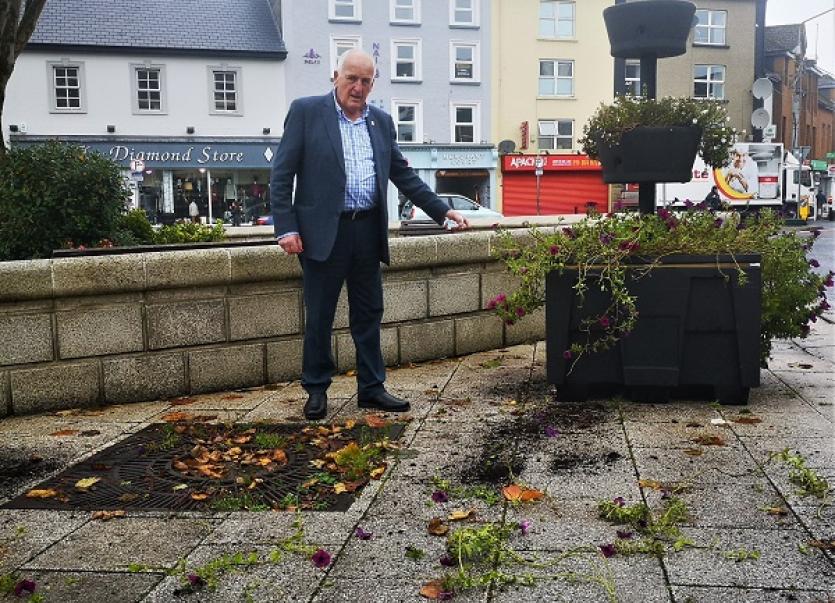 The Diamond in Donegal Town was left in a mess of plants and soil as a result of Halloween night vandalism.

Flowers were pulled from the many planters on the Diamond and were strewn on the ground.

Cllr Tom Conaghan said: “It looks as if they were pulled out and then kicked around the place.

“I know it is Halloween and I certainly don’t want to be spoiling anybody’s fun but is very sad to see this. It is the centre of the town and people put a lot of work into keeping it in good shape. A lot of people are very disappointed by what happened.”

Cllr Conaghan said he had spoken to a worker who was busy cleaning up the mess on Friday morning.

“Sean is doing a great job getting everything tidied up but I know he is very disheartened,” he said. “He does a great job keeping the plants looking so well. It must be very disappointing for him to see this.”

The Donegal Town councillor said he hoped there would be no repeat of the vandalism.

“Thankfully, this is a rare event and I hope that is the end of it,” he said.

Area Roads Officer Mark Sweeney was also very disheartened by what he saw on Friday morning. He attended the Diamond after being contacted by a member of staff.

He said: “It is very disappointing that this kind of thing is going on after all the hard work community groups, Tidy Towns and business groups have put in here. For somebody to come along and pull these plants out last night or in the early hours, it is so disappointing.”

The matter has been reported to the gardaí.