Frank McGlynn acutely aware of what he has won with Donegal 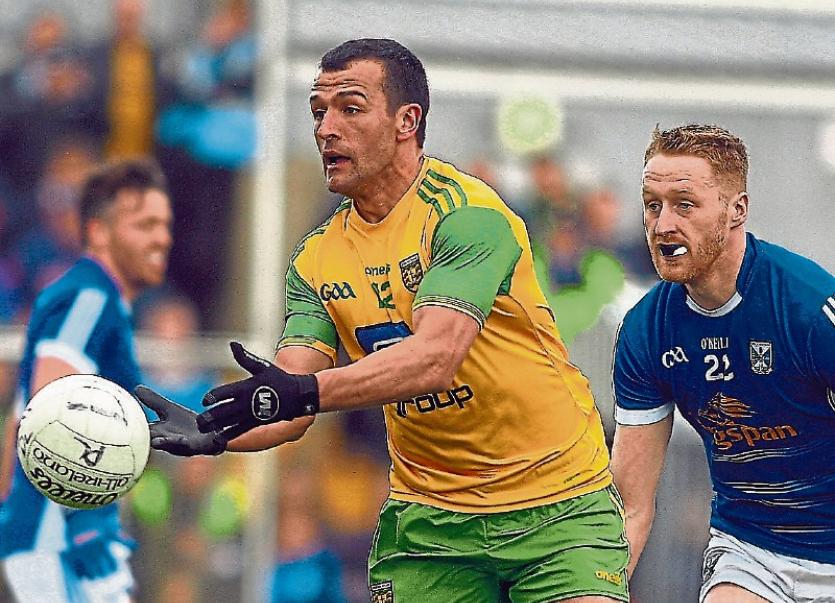 Donegal All-Ireland winner Frank McGlynn has played his last game for Donegal following his announcement this week that he is calling time on playing days in the green and gold.

In typical, Frank McGlynn style the darling of Donegal supporters made the announcement in a short statement stating he is retiring after 14 seasons in a Donegal jersey through the Donegal GAA website on Tuesday morning.

The 2012 All-Ireland winner and All-Star wing-back from 2012 and five time Ulster Championship winner has called time after a success laden playing career.

It wasn’t a decision taken lightly by the versatile Glenfin clubman, who first donned a Donegal jersey in the 2006 Dr McKenna Cup.

“It wasn’t an easy decision to come to after it has been a massive part of my life for the past 14 seasons since 2006,” said Frank, whose trophy cabinet also includes a Division One National League medal and a number of Division Two League titles.

“But I do think from a personal point of view and after thinking about it from a playing point of view it was the right time for me to go.”

He also admitted that he thought about calling time a number of times over the last few years, but decided to stay on.

“I thought about quitting a couple of years ago after we suffered a heavy defeat to Galway in the championship. I thought long and hard about it that time, I felt I wasn’t doing enough on the pitch and I wondered was it worth all the commitment..

“But I was delighted when Declan Bonner was appointed manager and I decided to throw my hat into the ring and go at it again and we went on to win two Ulster titles.

“While we were disappointed with the All-Ireland campaign I was delighted to have got an extra two years out of my career.”

A reduced role last season due to injury finally made his mind up for him.

“I found my role diminishing and that was mostly down to my body and my body telling me something and with niggly injuries I wasn’t getting a good run at training.

“This definitely was a factor because when you start out every season you are hoping to get a clean bill of health and a clean run at it and over the last couple of seasons I hadn’t been getting that.

“It is difficult then when it comes to big championship matches you are missing out and you are not able to play your full part.”

When Frank McGlynn, who also played county U-16, minor and U-21, was called into the squad by the then Donegal manager Brian McIvor at the end of 2005.

He made his debut the following January against St Marys in the Dr McKenna Cup in Fr Tierney Park.

“We lost a championship quarter-final to Cork in 2006 and th5ere wasn’t much between the teams on the day. But from 2006 to 2011 we did not enjoy much success in the championship.

“All through that time we were giving a huge commitment to the jersey and the cause and the level of commitment and the work the players were putting in wasn’t reflected in the results.

“Jim McGuinness changed the approach when he was appointed manager at the end of 2010 and the players bought into the way things were going to be done and the changes that were going to be made.

“He had that great group of U-21 players from the year before that had lost in the All-Ireland final to Dublin and things just seemed to snowball after that.

“We had gone a few years where we had first round knockouts. We lost to Antrim in MacCumhaill Park, so it was a big turn around. Tyrone were the dominant team at the time. “They were heading for a three in-a-row that year and while we rode our luck in that 2011 semi-final against Tyrone it was a huge victory.

“We then beat Kildare in that epic quarter-final that went to extra-time and then played Dublin in the All-Ireland semi-final.

“Around that time too, Dianne had our first child and all those times are marked with our own personal milestones to remember those times.

“The Dublin game will always be remembered for the low scoring and the 0-4 to 0-2 score at half-t-me and the pundits giving out about the 14 men behind the ball.

“But we were fully focussed on winning the game and but for a few mistakes and a couple of decisions that did not go our way we came close to defeating Dublin who went on to win the All-Ireland that year.”

Donegal learned from 2011 and with Frank McGlynn playing a key role they won Ulster back-to-back in 2012 and defeated Kerry and Cork on their way to claiming All-Ireland glory against Mayo.

“We had a great run through Ulster and bounced into Croke Park.

“We came through the toughest route, Kerry in the quarter-final and Cork in the semi-final. The were massive big games for us and we went on to beat Mayo in the final.”

“You don’t remember much of the game, you are so nervous and focussed on different things and you don’t enjoy it at the time. But it is great to have the memories that go along with the final.

“One that comes to mind is my granny Martin, in Glenfin, who never goes to games. She was in Croke Park for the All-Ireland, something I’m sure she thought she would never do.

“She always listens to games on the radio but she was at the game and really enjoyed it.

Another great memory is taking the Sam Maguire Cup back to the Glenfin clubhouse on the Thursday after the final.

“That was something special because it was something I was looking forward to doing once the final was over because I remember as a young boy getting out of Dooish NS to see the 1992 All-Ireland team in Brockagh village.”

Frank McGlynn and Donegal were back knocking on the door of another All-Ireland title in 2014 after sensationally defeating Dublin in the All-Ireland semi-final. But they were pipped by Kerry in a closely contested final.

Great Kerry forward Colm ‘Gooch’ Cooper, a five time All-Ireland winner and an eight time All-Star, is among the many great forwards Frank McGlynn went toe to toe. He rates the Killarney man as the best forward he has ever marked.

“I was given the job of marking Colm Cooper and I was under a lot of pressure to say the least and it was a long 55 to 60 minutes before I was pulled ashore.

“And then you move on a few years and I’m on a Donegal team getting the better of Kerry, with Colm Cooper on board, in an All-Ireland quarter-final. It just goes to show what can be achieved if you work hard and stay at it.”

The 1992 All-Ireland winning team along with Damian Diver, Adrian Sweeney and Brendan Devenney are among Frank’s boyhood heroes when growing up in Glenfin.

“Growing up as a teenageer the 1992 All-Ireland winning team was always in the back of my mind and Damian Diver at wing-back was a player I always admired and I was honoured when I joined the squad first to share a dressing room with Damian, Adrian Sweeney and Brendan Devenney.

“These were players I went to see as a young lad in the early 00s and those great All-Ireland Qualifier runs in 2002 and 2003 and to be sitting in a dressing room with them in 2006 and 2007 was a great experience for a young player at that time”.

And so the curtain comes down on a fabulous inter-county career but at 33 Frank has a few more years left in the legs and is looking forward to giving a little more time to the club over the next few years.

But he walks away with a proud record and distinguished service to his county and the green and gold of Donegal.

“I have no complaints about my career and I can walk away quite happy because I’m sure there are many Donegal players who had longer playing careers than me and put in the same effort but haven’t enjoyed the same rewards as me.

“I am acutely aware of what I have been given while playing for Donegal.”