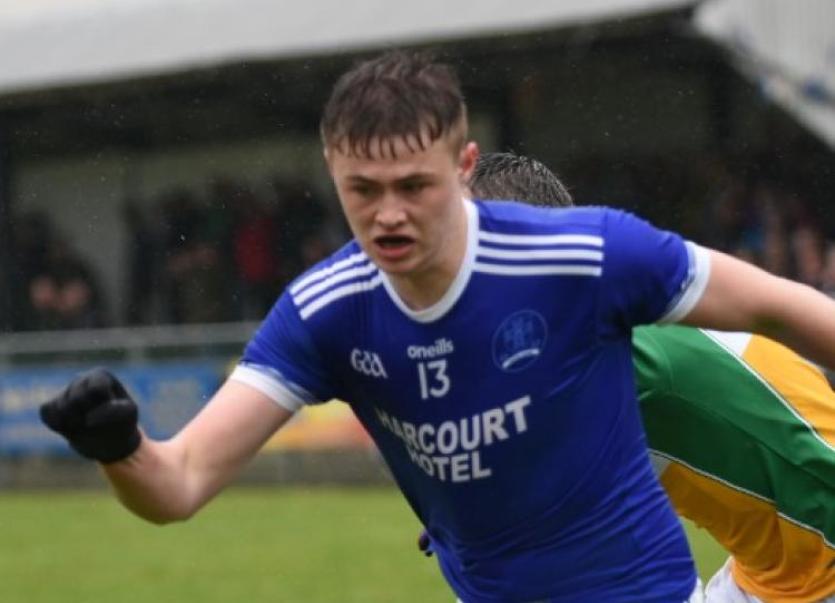 Kieran Gallagher . . . on the scoreboard for Naomh Conaill

Naomh Conaill are through to the Donegal  U-21 football championship semi-final after a hard fought one point victory over  Dungloe in Rosses Park on Sunday afternoon.

Nathan Byrne kicked the winner three minutes into injury at the end of a scrappy and at times feisty encounter that saw referee Greg McGroary the centre of attention from very early.

The official, who was whistle happy from the off, flashed ten yellow cards (seven to Naomh Conaill and three Dungloe) and five red cards (three to Dungloe and two to Naomh Conaill players).

Three of the red cards - Ryan Connors and Matthew O’Donnell, Dungloe and Shay McDevitt, Naomh Conaill - were straight red cards and came in the dying seconds following a late pile-up.

Dungloe also lost Daniel Ward at the end of the first half after two yellow card offences and Naomh Conaill’s Paul McGuinness was sent packing after picking up two yellow cards in the early minutes of the second period.

Dungloe led by three points at half-time after coming from 0-3 to 0-1 down at the end of the first quarter.

Dungloe also had calls for a penalty turned down during this period also after Connors was fouled in the Naomh Conaill goal area. The referee, after consulting with his umpire, awarded a 13 metre free, converted by Bonner.

Naomh Conaill started with seniors Kieran Gallagher, Nathan Byrne but they were without Jeaic McKelvey (working) and Eoghan McGettigan (injured).

Dungloe had a good start to the second half and went 0-8 to 0-4 ahead courtesy of two Oisin Bonner points, one from a close-in free.

Now down to 14 Naomh Conaill also responded well to land the next four  points to tie up the game at 0-8 by the 52nd minute. Kieran Gallagher and Nathan Byrne kicked two points each.

And when shortly after Odhran Doherty joined the attack to knock over his second Naomh Conaill were back in front.

But Dungloe dug deep and they were back on level terms in the early minutes of injury thanks to another Bonner point.

In a frantic finish Naomh Conaill, who were playing down the hill, pressed and Byrne landed the equaliser with 34 minutes on the clock.

Dungloe once again went in pursuit of the equaliser but were thwarted in their efforts as Naomh Conaill held out.

Naomh Conaill’’s Caolan McGill was shown a black card in the closing seconds.