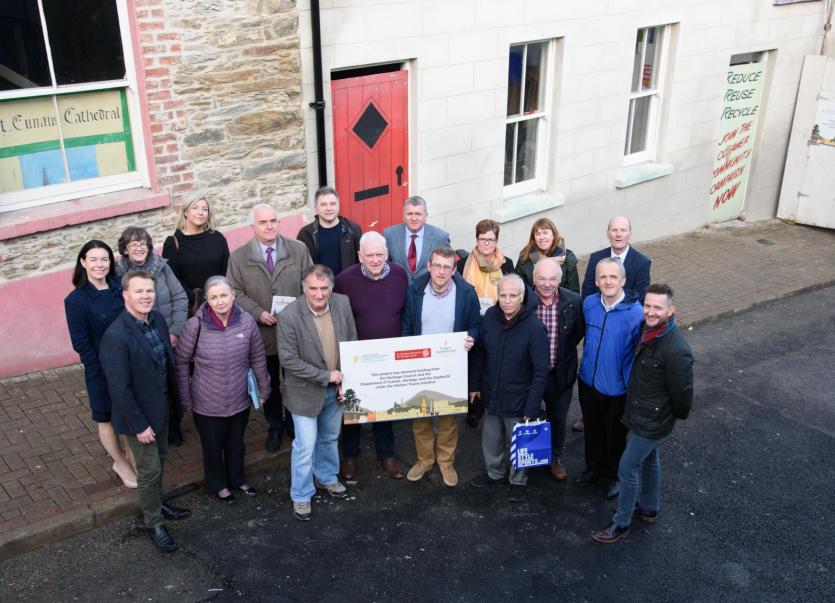 As the Historic Towns Initiative on Church Lane, Letterkenny nears completion, a delegation from The Heritage Council and the Department of Culture, Heritage and the Gaeltacht visited project partners on Wednesday, November 6 to view progress.

Under the Historic Towns Initiative, conservation works are taking place to seven historic properties that include roof and chimney repairs, installation of cast-iron rainwater goods, reinstatement of timber sash windows and doors, application of lime render or lime pointing, and the repair of a historic shopfront using traditional materials and informed by best conservation practice. The conservation works are being funded by The Heritage Council, Donegal County Council and the private landowners.

"This collaborative way of working has provided us with mechanisms that facilitate heritage-led regeneration in our towns and villages and encourage greater community cohesion. The project has also encouraged greater cross-directorate cooperation within Donegal County Council as the Conservation Office within the Community Development and Planning Directorate and the Heritage Office within the Housing, Corporate and Culture Directorate were joint project leaders. The successful approach adopted for Church Lane can be applied elsewhere.”

Initiatives such as the 'Save the Church Lane' campaign started in January 2014, the Heritage Streets Alive project in 2015, the Church Lane Conservation Plan in 2016 and the Collaborative Town Centre Health Check in 2018 established strong community support and strong evidence-based support for the heritage-led regeneration of Church Lane.

The Conservation officer with Donegal County Council, Collette Beattie said: "The Historic Towns Initiative builds on several community-led initiatives instigated by the Letterkenny Cathedral Quarter as well as the designation of the Ecclesiastical Architectural Conservation Area under the Letterkenny Local Area Plan.

"The Historic Towns Initiative has benefited immensely from the voluntary and dynamic approach of the Letterkenny Cathedral Quarter Committee, the grade one conservation expertise of Dedalus Architecture and the shared vision of the property owners.”

During their visit to Church Lane, officials from The Heritage Council and the Department of Culture, Heritage and the Gaeltacht enjoyed lunch with project partners in the Wholegreen Restaurant on Church Lane before going on a guided tour of the Historic Towns Initiative conservation works.

Donnan Harvey and Shane Toolin of the Letterkenny Cathedral Quarter Committee highlighted the work of their group over the past five years and their aspirations for Church Lane. Conservation architect Duncan McLaren, Dedalus Architecture outlined the conservation works to the seven historic buildings and property owners spoke about their future plans to bring their properties back into use.

The funding of €200,000 awarded by The Heritage Council and the Department of Culture, Heritage and the Gaeltacht for the Historic Towns Initiative on Church Lane, Letterkenny was the largest allocation of the six successful historic towns across Ireland under this year’s scheme.

This funding is being supplemented with €40,000 from Donegal County Council and private funding from Church Lane property owners. It is anticipated that the conservation works as part of the Historic Towns Initiative on Church Lane will be completed later this month and The Heritage Council indicated that the work on Church Lane will be profiled at a national seminar on the Historic Towns Initiative in Kilkenny in January 2020.