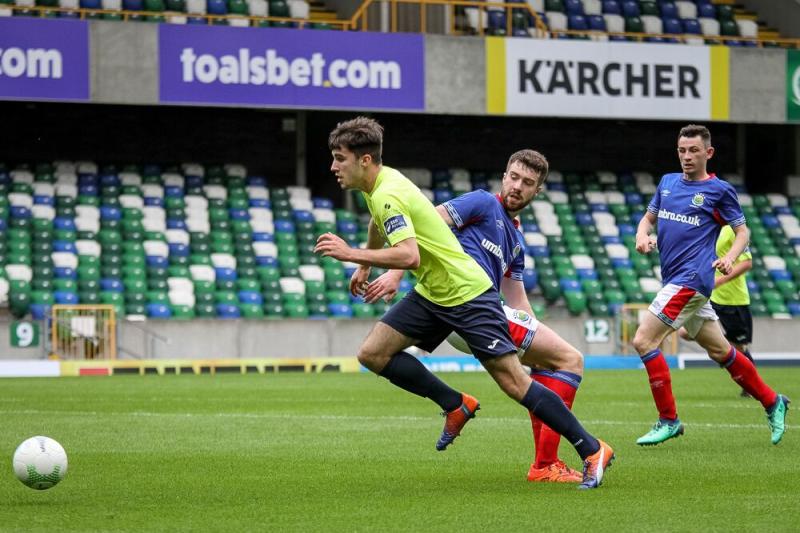 Striker Jamie Browne is the latest player to sign a Finn Harps first-team deal ahead of the 2020 season.

Browne was the top scorer for the club’s Under-19 side last year with an impressive 13 goal return. He joins fellow Under-19 graduates Kieran Farren and Stephen Doherty who signed senior deals with the club last month.

With the departure of forwards Nathan Boyle and Mikey Place, Horgan knows he has to boost his squad in this department.

Speaking to club media, Browne was delighted with the opportunity to continue his rise through the ranks at Finn Park. "I'd like to thank Ollie for the opportunity to have signed. Having played for Under-17s and 19s, the goal was always to reach the first team and to do so is a great achievement for me. I'd like to thank all the coaches I've worked with, especially Joe Boyle from the 19s who really helped me to push on last year. I can't wait to get started now and give my all for the team," he said.

After the signing, manager Ollie Horgan told the club website: "We’re pleased to have Jamie make the step up to the senior squad for next year. We’re looking far and wide to build the best possible squad and we’ve a duty too to utilise the quality that we have in the club and on our doorstep. The academy has come on leaps and bounds in the past few years and players like Jamie are great examples of that. It’s a big step up now to senior football and he’s a lot of work ahead of him but if he keeps the head down he can certainly play a part."

Head of Academy Kevin McHugh was delighted with the news.

"Its more positive news for the Academy and great news for all the coaches who have worked with Jamie the past five years,"he said.

He was also quick to praise Browne's work ethic and dedication throughout his time at the club. "Its not as simple as signing for the Under 13s and thinking that's it, 15s next and 17s after that. It takes a huge commitment and hard work to stay ahead of the pack and be the '1' that earns a contract. Ollie doesn't hand out contracts easily, they must be earned and I'm sure the message to Jamie is one of congratulations, but the hard work starts here and now. The League of Ireland is a tough place to establish yourself," he added.