Remembering the tragedy in Glenhola on January 27, 2019 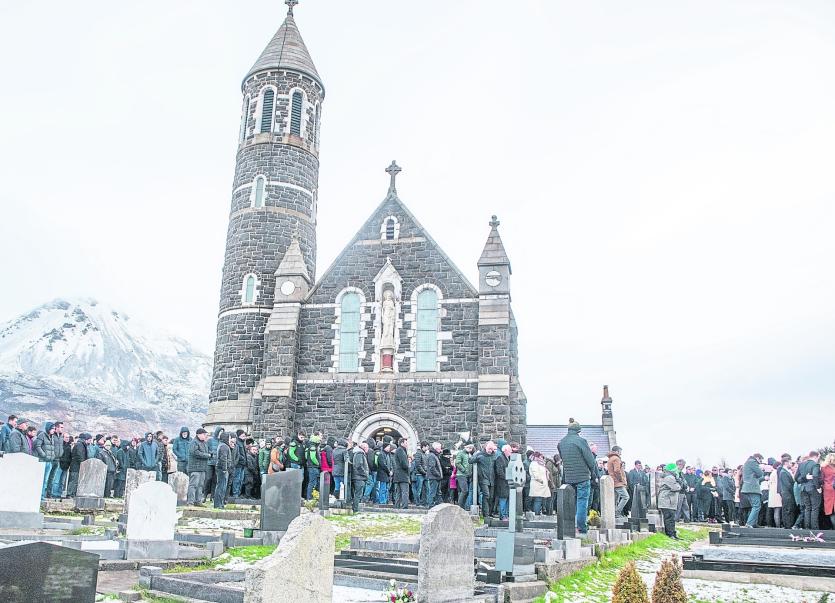 This week, a soft blanket of snow covered the fields on either side of Glenhola - the place where four young men tragically lost their lives in a car crash, this time last year.
On January 27, 2019, a cold, dark and bitter night, communities were left reeling as news that a car crash had cruelly claimed the lives of four young men filtered through to their homes.
These young men were Mícheál 'Roycee’ Ó Rabhartaigh 24, Gaoth Dobhair, Shaun Harkin, 22, Gort an Choirce, John Harley 24, Falcarragh and Daniel Scott ,23, Gort an Choirce.
The tragedy ignited an outpouring of grief across Gaoth Dobhair, Gortahork, Falcarragh and further afield. Huge crowds attended the four Funeral Masses that took place from Dunlewey to Falcarragh under a grey and empty sky. Snow lay heavy on the hills and on the mountainsides - a landscape which echoed the emotion of its people. The young friends were described as kind-hearted, generous, good-spirited and shared a great love of sport.

'Seachtain chruaigh na gcuimhneacháin'
This week, hundreds of people attended a Mass of Remembrance for three of the four young men who tragically lost their lives in 2019.
An anniversary Mass will be held for Shaun Harkin, 22, in Christ the King Church, Gortahork on Friday night at 7pm.
The Parish Priest of Gortahork, an tAthair Seán Ó Gallchóir, this week poignantly described this time as ‘seachtain chruaigh na gcuimhneacháin’ - a week of difficult memories.
United as one, in grief, communities prayed remembering all of those who have been affected by this devastating loss.
Father Brian Ó Fearraigh, who attended the scene of the crash on January 27 said that during these Anniversary Mass gatherings, once again the deep bonds of friendship transcended parish boundaries, as communities united in love and prayerful support for one another and especially to stand with and accompany the families of those who have been affected by the unspeakable tragedy.

'For those who believe, death does not have the final word'
He described the Anniversary Masses as ‘particularly emotional’ and commended the strong and visible ‘show of solidarity’ that the community continues to offer one another, and especially the loved ones, in the aftermath of this tragedy.
He said: “These deaths shook the community to the very core and from that same core, a powerfully visible and healing revelation of light, love, kindness, hope and prayerful support has poured forth, which undoubtedly is a source of strength, comfort and healing for many people. Hearts that are so deeply wounded and hurt are being gently healed by the comforting balm of love and compassion, which continues to be offered to bereaved families and friends. He said that in the face of death there is hope: “For those who believe, death does not have the final word.”

Loss
He urged people to continue to support those who feel the devastation of loss.
He said: “Death is only ‘goodnight’ until we meet again in the light of God's eternal kingdom, where every tear will be wiped away. Eternal life, conquers even death itself.”

Pictures of the four young men have led tributes on social media. Many have paid moving tributes to the four men over the course of the last week. The loss of these young men will never be forgotten. Their memory will continue to live on in the hearts and minds of those who love them.
Ar dheis Dé go raibh a n-anamacha dhíl.