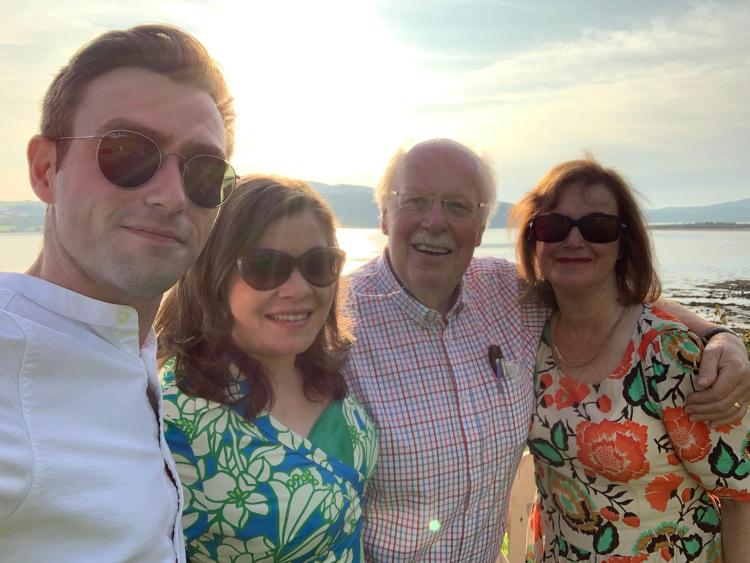 Jane was also the Centre's first Arts and Cultural Director, a position she held for eight years before leaving in 2019 to join The Ireland Funds team.

The bubbly Buncrana woman attributed her NYIC success to her formative drama experiences at Scoil Íosagain and Scoil Mhuire in Buncrana, under the tutelage of Sinead McLaughlin and Patricia 'Tinney' Doherty.

Jane said: “In 'Factory Girls', Frank beautifully encapsulates the characteristics of the Irish Woman that often convey strength, tenacity, love, and determination while navigating through an uneven playing field that is life. Through his craft of playwriting Frank was one of the first to celebrate and highlight and share with the world the women of Ireland.

“I've been very fortunate to have like-minded male figures in my life, like Frank that have encouraged and supported and created equal opportunities in this world, One the greatest influences and heroes is my father, John, and his unwavering support and love for his community, this can been seen in his voluntary work with the RNLI, a life-saving organization made up of local heroes ready to jump into action to save lives at moments notice. Dad showed us the importance of community, this stuck with us, and my other hero; my husband Robert. Anyone who knows Rob will agree that he is so kind, wise, supportive, and very very patient with me.

“Like Frank’s characters in Factory Girls, I have been surrounded by women whose presence in my life has been my greatest influence and roadmap.

“My Mum, Breda, who gave me her moral compass and compassion, she got from her Mum, Bridget, My nana, Kathleen, and Aunt Tessie. Both were strong women who spent their lives helping and caring for others as nurses. My sisters, Cathy and Amy, are my best friends and natural teachers, like our aunts, Mairead and Gena, my mother-in-law Sue, her mum, sisters and Orla, and my niece, Holly Jane.

“I had three teachers who made me realize everyone can make a positive contribution to the world. Monica O’Donnell, Patricia Tinney and Elizabeth O’Hare taught me and that talent and strength come in different shapes and forms. This stayed with me. All of these incredible ladies have given me strength, encouragement every day,” said Jane.

Congratulating Jane on her NYIC Woman of the Year Award 2021, Frank McGuinness said, since her arrival in America, Jane had “worked tirelessly to promote the cultures of Ireland”.

He added: “Her imagination is cut from the kindest fabric. As befits a Buncrana woman, her family and my family, steeped in our historic industry of shirt-making, I salute Jane as a true Factory Girl, a credit to our town, our county of Donegal and to our country, which she loves wisely and dearly.

“Together with Robbie, Jane is a credit to her own and to us all. Her wonderful sense of fun, her hard work, her genuine zeal and enthusiasm, these are the mark of a terrific woman who thoroughly deserves this honour.

“I wish we were with you tonight, dear Jane, and with my partner Philip, my entire clan of Mc Guinness and O'Donnell, and myself I send you love. May we walk safely and happily on the White Strand soon,” concluded Frank McGuinness.

Jane was quick to acknowledge the help she received from previous Buncrana emigrants to New York, Turlough McConnell and Cahir O'Doherty, to whom her Uncle Willie introduced her, when she left Inishowen in 2011. She described the pair as the “American uncles I never had”.

She recalled: “I had just finished working as the Heritage Officer in the Playhouse in Derry with Pauline Ross, its Founder and Director. Through Turlough and Cahir, I met Paul Finnegan, from Galway, who had just started as Executive Director at the New York Irish Centre.

“It was a pivotal moment for Robbie and I and our future in New York, when Paul and Sean Mackin (Chairperson, New York Irish Centre) offered me the position of NYIC's first Arts and Cultural Director.

“It was so exciting. The community was so welcoming, The New York Irish Centre is home to the Donegal Society who does wonderful work here in New York. My task was to grow an organic arts and cultural programme that catered for everyone and helped to bring the community into the Centre.

“Growing up in a close-knit community near the Border gave me an appreciation for the importance of diversity and collaboration both of which influenced my new role and making sure that our programming offered variety and accommodated everyone,” she said.

Jane's background in theatre and drama, she had studied Drama and Psychology at Ulster University, Magee, under Dr Tom Maguire, an expert in the field of Drama and Community, empowered her to found the Emerald Footprints Drama Group, for children with an affinity for Ireland or interest or heritage. The group explores Irish myths and legends through the medium of drama.

Jane said: “The New York Irish Centre is also known for its work with the more mature emigrant, senior citizens. We had a weekly gathering called Senior Lunch, so I was also building activities around that lunch, to engage with our seniors a bit more. This was a really important service because it meant we were able to stay in touch and check in on them, softly, creating engagement and preventing isolation.

“Through our Golden Footprints Drama Group, we examined their experiences as emigrants, looked at different aspects of their lives, through drama and storytelling. We also introduced Tai Chi, yoga and visual arts classes, as well as theatre visits to the Irish Repertory Theatre, founded by Charlotte Moore and Ciarán O'Reilly.

“It was an absolute pleasure to work with my cousin Aeidin McCarter, Head of Culture at Derry City and Strabane District Council in 2014 on a very special project when we helped coordinate arrangements to welcome the Clippers to New York, particularly the home-clipper captained by our cousin Sean McCarter.

“The New York Irish Community is absolutely thriving and incredibly supportive, Rob and I very grateful to be part of, you never forget all the help and support you were given when starting out, it stays with you and goes full circle when you are in a position to help. Sadly there are not too many people making that move given the current circumstances. It has been a traumatic year here. At the minute we have outdoor dining, however, gyms and salons are open with restriction. I am also hoping the Inauguration of President Biden on Wednesday will bring unity and coming together,” said Jane.

Local councillor, Martin Harley at one of the offending manholes

A Donegal town vibrates to shake rattle and roll . . . from the manholes!