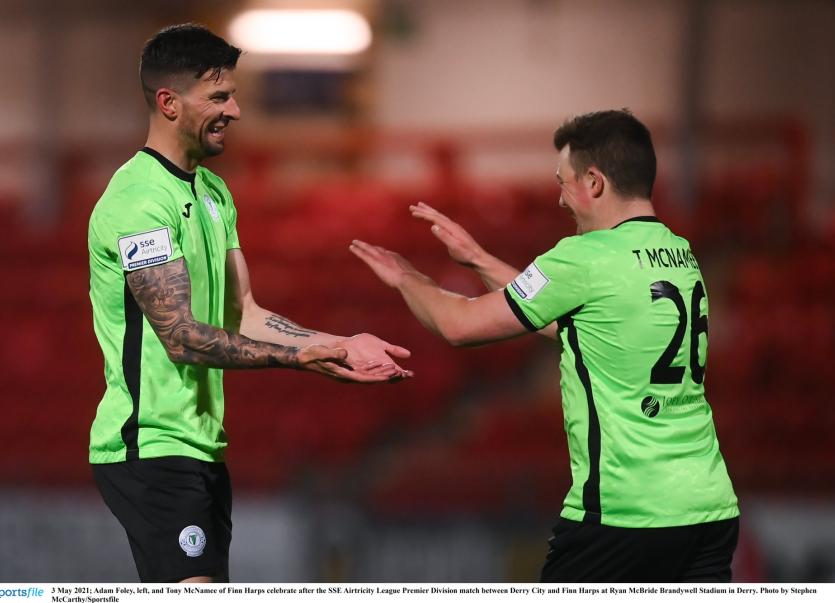 Adam Foley struck an 89th minute winner as Finn Harps grabbed all three points from a memorable derby game at the Brandywell.

In an exciting contest, the Harps striker fired home with 60 seconds remaining to seal the club’s first ever league win at the Brandywell.

Harps wasted no time in making their intentions known and they could have had the ball in the net within two minutes following a well-worked move. Dave Webster’s pass forward was flicked on by Adam Foley into the feet of Karl O’Sullivan on the right, and his cross was met by the incoming Barry McNamee who side-footed the ball just wide of Nathan Gartside’s goal.

Harps were bright in the opening stages, yet it was Derry City who took the lead on 17 minutes with their first shot on goal. Will Patching picked up the ball in his own half on the left wing and played a superb ball in behind the Harps defence for James Akintunde. The forward still had work to do, but he cut inside two Harps defenders before curling a brilliant shot beyond Mark McGinley into the corner of the net to make it 1-0.

The goal was just what Derry needed and they came close to doubling their lead within minutes when Patching picked up the ball 25 yards from goal and curled an effort towards the net, but this time McGinley pushed it away to safety.

There was a really intense battle in the middle in what was a really congested midfield, and Derry knew they were in a fight, with Harps players not letting them settle for a second on the ball.

Harps nearly equalised, an in spectacular fashion, when Will Seymour collected the ball 30 yards out and drilled the ball at Gartside’s goal, the City goalkeeper beaten and relieved to see it smack off the top of his crossbar.

Harps kept the intensity up and they equalised 10 minutes into the second half. A McNamee free kick into the area found Webster, whose close-range header was pushed away by Gartside, but only to the edge of the area where Karl O’Sullivan drilled it goalwards, and the ball sliced off Cameron McJannett and ended up in the net.

Harps were full of belief now, but the goal sparked Derry into action, and not for the first time this season, McJannett found himself in an advanced position, drilling a low shot goalwards on his left foot, forcing McGinley to push the ball behind for a corner.

Derry City came so close to winning the game with just five minutes remaining, when Will Fitzgerald battled to keep possession on the edge of the Harps area, and he played Jack Malone trough on goal, but, under intense pressure, the midfielder smacked a shot off the post and Harps survived.

That proved a crucial moment as Harps snatched the points with a winner just one minute from time, when Barry McNamee played in Foley, who drilled it low past Gartside to seal a memorable win for Ollie Horgan’s side.

It was Foley's fifth goal of the season.