Online public meeting on the future of the Western Rail Corridor 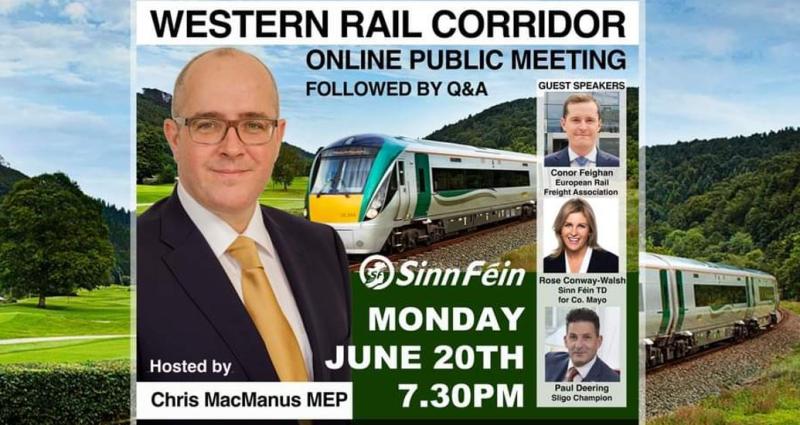 People in Donegal who are interested in seeing the Irish rail network expanded - including attempts to get a link restored to Donegal - are being invited to an online public meeting on the future of the Western Rail Corridor which will take place on Monday evening, 20th June, at 7.30pm.

The secretary of the Donegal-based West Ulster Rail Initiative (WURI) Brendan Flanagan, from Malin, is urging people in the county with an interest in railways to log on.

Each panellist will speak briefly before the meeting opens up to a Q&A/Comments session.

Commenting on the meeting, Colmán Ó Raghallaigh, spokesperson for the West on Track lobby group, said: “While the meeting will provide an update on the current situation with the Western Rail Corridor, its main purpose is to promote the benefits of reopening the rail line among the general public, to add momentum to the campaign to reopen the line and to demonstrate the level of support that exists across the West and North West for this much needed project.

The West on Track movement has been in existence for over 30 years and wants to see the re-establishment of rail links that would connect Sligo with Mayo and Galway.

The first phase of the Western Rail Corridor between Limerick and Galway has seen the formerly closed section reopened.

The second phase involves attempts to reopen the section of disused railway from Athenry to Tuam and onto Claremorris.

West on Track also wants to see a section of former railway re-established from Claremorris to Sligo as well.

WURI believes that the reopening of the Western Rail Corridor would strengthen the case for restoring a link to Donegal as well.

The meeting is open to the public to attend and will be held on zoom. The zoom link and meeting ID are:

Although this event is being hosted by Sinn Féin it is not a party political event and it is expected that public representatives and Western Rail Corridor advocates from across the political spectrum will be in attendance.

“We encourage all those who feel strongly about the future of the rail line to participate in this meeting and to show their support for its reopening,” Mr Ó Raghallaigh added.