Andrea Redmond - helping to put Doochary back on the map 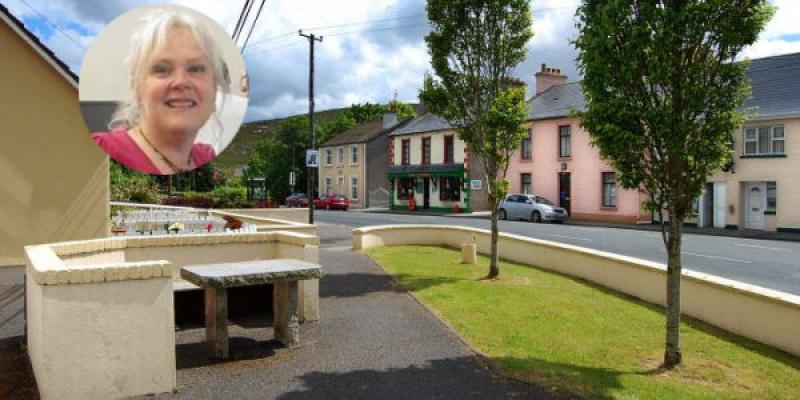 It’s a long way from Prince Edward Island in Canada to Doochary in west Donegal but for one woman, the challenges in both places are similar.

Artist and community activist Andrea Redmond is seizing the opportunity to put tiny Doochary on the map by harnessing everything that is good in the area.

Andrea was born in Quebec City, the French part of Canada, to teachers Margie and Teddy Redmond, who were from Canada’s smallest province, Prince Edward Island and this is where she grew up.

“The island’s population is composed of many families who originate in Ireland, my own from Monaghan and Wexford. Irish cultural traditions were to the fore and many spoke Irish up into the early 20th century. We are referred to as Spud Islanders as potatoes are our main claim to fame, as is Anne of Green Gables.”

She explains that the island is a very popular tourist destination for people worldwide and as an agrarian community with no manufacturing, the tourism industry is the growth industry islanders rely on.

“I can see many such strong parallels with Doochary, which is where I now call home. Islanders rely on the income from tourism to survive and prosper. If protected Doochary could also benefit from sensitive tourism development and that would mean, to begin with ensuring its environment is not blighted by developments such as massive wind farms which will benefit no one locally but Dublin call centres.”

Community activist
Andrea was the first in her family to return to Ireland. She worked with local women on Falls Road, Belfast during the Troubles, to support the creation of the first women’s centre.

"During this time I painted the first women’s mural in an area that was adjacent to An Culturalann on the Falls Road. I am and was the only woman Republican mural painter during the Troubles. It’s a famous black and white image of women engaged in the struggle for national liberation.

"This was in 1983, an interesting time as we were constantly under threat by the British Forces, RUC and Loyalist paramilitaries. This was the case for many years.

"There were no cherry pickers or safety harnesses in those days’ only ladders, and scaffolds. I worked in later years in the area of St James, Belfast where I lived as a single parent with three small children. I worked with a group of women, many of whom were wives of Nationalist POWs, as was my first husband.

"I raised my three kids below a scaffold; it became their playground as their mother I was a very active community artist/activist. We created murals, carnival floats, ran art workshops for local children.

"We often were subject to harassment from British forces, on one occasion being visited by the Lt Colonel of the Parachute Regiment. At the time I was up a 20ft ladder and looked down to see his arm entwined in one of its rung. I had a fear he was going to pull the ladder out, from under me, but he had actually stopped to point out I had placed an apostrophe in the wrong place.

"Without hesitation…. wee Lorna a very small woman chirped up that of course we did, as English was our second language and Irish was our native tongue. Before being shipped out he was caught by locals getting his picture taken below our mural.

“I have always been a community activist, it's been part of my family makeup. My father Ted Redmond, a school headmaster, was an advocate for the French language being provided in local schools and First Nations rights. He suffered often from a backlash for his beliefs.”

She moved from Belfast to Derry to undertake a doctorate in sociology and anthropology doing work with the Travelling community. She had worked professionally as a community development officer with Travellers in Belfast, Derry, Omagh and Strabane and in her working career held positions on management committees with organisations such as the Foyle Multicultural Council, and ran women’s groups, artists’ collectives and community centres.

“I am also an artist and exhibit in varying locations and my work also appears in print. My personal art is very different from that which I create with community groups.”

She is currently the secretary to Doochary, Cumann Forbartha-Na Duchoraidh/Doochary Development Group/Doochary Tidy Towns, with a group of wonderful women: Janice Ward and Megan McDermott and a host of village volunteers, including coerced husbands who they couldn’t thank enough for their support.

She is also thankful for the support from organisations such as Pobal Tidy Towns, Údarás na Gaeltachta, Community Foundation Ireland, What Darragh Did, Seeds of Change/Changemakers, and Donegal County Council who have been extremely supportive, including two of its hard-working councillors Micheal Cholm Mac Giolla Easbuig and Noreen McGarvey and local TD Thomas Pringle.

“I was blessed to be introduced to Doochary by my husband Frankie McDevitt, whose family originate from the area. Next to my island home, there is nowhere more beautiful and special than An Duchoraidh. The area is so beautiful and as I mentioned previously developed with care and sensitivity the tourism industry could provide jobs for many years to come.

“The area has suffered in the last few years with the loss of so much of its infrastructure. The local shop, health centre and garda station were closed. The pub was up for sale and its future was threatened. 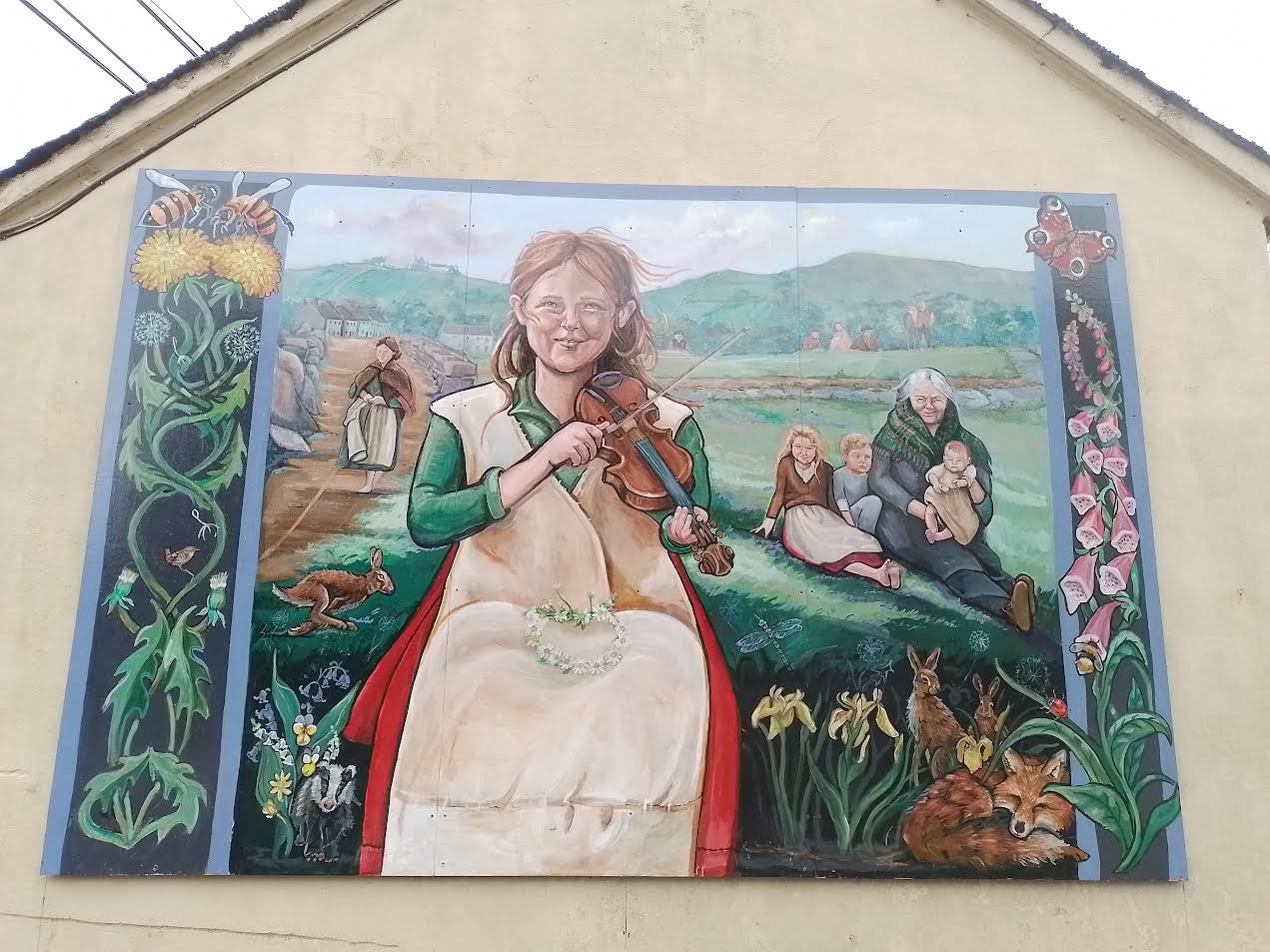 One of the new murals in Doochary village

“However, with new owners Jimmy McGinty and Michael McFall, The Corkscrew Bar, its future seems sure and the work and ideas the new owners have is a wonderful boost to the local economy and morale.

“The previous owners Aidan and Anne-Marie Bonner have also been extremely supportive of our community work.

“Our group is presently in negotiations with the HSE to allow the community usage of the former health centre, which will be developed into a local community centre.

“As other areas have been gifted their former health centres, our committee is hopeful that the HSE moves quickly to also allow our village the same advantage. The village needs a base for continuing education, drop-in and support facilities. Local children should have an after-school and summer scheme provision, which we are currently working to develop.

“We are also working to develop a play area for children, as currently there is neither a swing nor slide in the village. We would also like to work towards a social economy project. Our committee is currently working on a heritage project which has been recently interviewing older residents with the aim of developing a book of their stories and village history.

“We have had great support from people like local historians Seamus Coll, Jimmy Duffy and Brian Cannon. The heritage groups meet in the Corkscrew Bar in the village, every Wednesday evening from 7-9pm, and as well as an informal evening of stories and memories we are lucky to have the wonderful scones of Rose Bonner.

“As part of our Tidy Towns work the committee has created a number of painted murals, including a welcoming one depicting famous local poet Dan McDermott, one of Joey Ward and a number of historic photographic visuals with the support of Signworxs. The talented John Gillespie has created a wonderful welcome to Doochary sign as well as a wonderful heron sculpture for our fountain.

Cumann Forbartha-Na Duchoraidh/Doochary Development Group/Doochary Tidy Towns future endeavours will see the work to provide a play area for local children, the creation of a community centre, encourage the use of the Irish language - with the possible development of an adult summer gaeltacht programme, developing a community garden, enhance and extend the riverwalk as part of tourism infrastructure.

Further art projects with local children, supporting local families with after-school and homework clubs, a mural honouring the members of the Cumann na mBan of the village and volunteer Joe McKelvey, as well as developing a local social economy project to provide jobs for local families, to name just a few.

Doochary Fair
This weekend, Saturday and Sunday, August 6-7 the group will be running a Doochary Fair with events be hosted in the Corkscrew Bar. On Saturday, there will be a mural project with children at 10am, followed by Mr Magician at 11.30am.

A bucket collection will be held from 1-3pm to raise funds for a defibrillator for the village. On Sunday there will be a craft fair/car boot from 1-4pm and a Sheep Show from 2pm.