RACING: A runner-by-runner guide to the 2022 Aintree Grand National 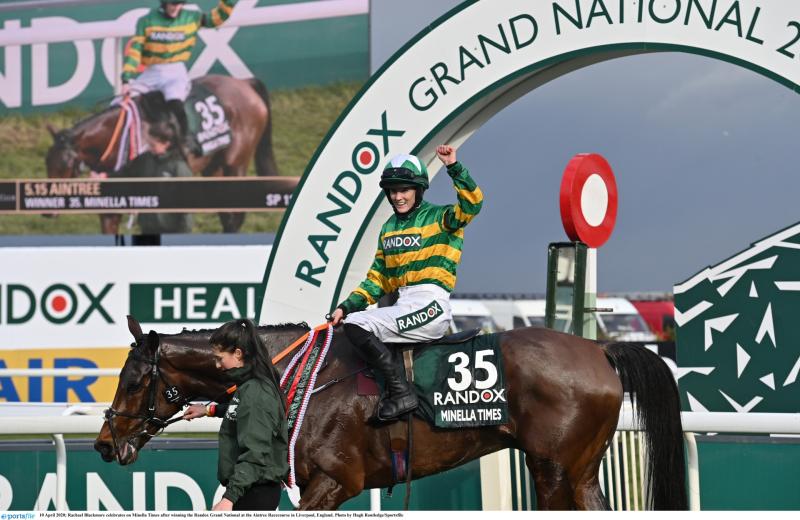 One of the great spectacles in the world of sport takes centre-stage on Saturday with the £1-million Grand National at Aintree. 40 runners compete over 30 fences in the four and a quarter-mile event which has been won by some of the sport’s true greats, including Red Rum, Aldaniti and Tiger Roll.

Rachael Blackmore created history in the 2021 running when becoming the first female rider to win the event and she is hoping for more success this year. We have previewed the race, which you can watch live on ITV Racing at 5.15pm with our runner-by-runner guide to the 40 contenders. Odds are correct at the time of writing and from Betfair

1 Minella Times – 16/1. Last year’s winner commands plenty of respect under Rachael Blackmore, but he has to shoulder top-weight here which is no easy task.

2 Delta Work – 8/1. Greatly respected having won the Cross Country Chase at the Cheltenham Festival. A Grade One winner, this unique test could really suit.

3 Easysland – 66/1. Quite simply not the force of old and is yet to complete this term.

4 Any Second Now – 8/1. Leading player. Lucky not to be brought-down in the race last year before going on to finish third. Enjoyed a good prep at Fairyhouse when winning the Bobbyjo Chase and he is a leading contender.

5 Run Wild Fred – 25/1. Guaranteed to stay, but he does need to improve his jumping which was exposed in the National Hunt Chase at Cheltenham.

6 Lostintranslation – 66/1. Has to be a doubt whether he stays this far. Others preferred.

7 Brahma Bull – 66/1. Fell in the Cross Country Chase and was previously pulled-up in the Thyestes Chase. Drying ground would be a help, but hard to make a case for.

8 Burrows Saint – 20/1. Good fourth in the race last year, but he didn’t seem to get home up the elbow and he could be the same story this year.

9 Mount Ida – 33/1. Interesting runner given Kim Muir win last term and two smart victories already this season. Disappointed at Cheltenham last time out however and now has questions to answer.

10 Longhouse Poet – 16/1. Leading contender for trainer who won this event in 2006. Taken the same route as the winner on that occasion Numbersixvalverde by landing the Thyestes Chase at Gowran Park. He remains unexposed over fences and is a leading player.

11 Fiddlerontheroof – 14/1. Kept fresh for this assignment and shaped with promise at Ascot last time out. A sound jumper, the question is whether his stamina will last out.

12 Two For Gold – 50/1. In fine form this season with two victories backed up by a good second in Grade One company latest. However, he fell over these fences last term and his stamina is far from assured.

13 Santini – 33/1. Should be a likely stayer and the pick of his best form wpuld make him of interest. However, he needs to improve on recent showings.

14 Samcro – 66/1. Grade One winning chaser and hurdler, but this is a dramatic step up in distance and he is hard to fancy.

15 Escaria Ten – 10/1. Serious contender following second in the Bobbyjo at Fairyhouse. He could be crying out for this trip and is of serious interest.

16 Good Boy Bobby – 33/1. Done most of his winning at Wetherby of late and he was well-beaten at Kempton last time out.

18 Coko Beach – 33/1. Solid performer who always seems to run his race and he looks one who will relish this stamina test. Not discounted.

19 De Rasher Counter – 33/1. Classy individual on pick of his form, but looked in need of the run after 489 days off last time and he needs to step up again.

20 Kildisart – 33/1. Boasts winning form at Aintree, this is a different ball game and he looked in need of the run when fourth after 462 day break at Newbury on his latest start.

21 Discorama – 33/1. Interesting runner who looks a potential stayer. He was seventh in the race last year and better is expected this time around.

23 Enjoy D’allen – 12/1. Bought by JP McManus with this race in mind. Third in the Irish Grand National last term, he looks a leading player given he should stay the trip.

25 Dingo Dollar – 50/1. One of two Scottish-trained runners. Will relish this stamina test as shown when second in the Scottish Grand National last term, but was pulled-up in Grand Sefton on previous try over the Grand National fences.

26 Freewheelin Dylan – 50/1. Irish Grand National winner last term, but has not been in the same form this season.

27 Class Conti – 100/1. Has only won once for Willie Mullins and has been badly out of form this season.

30 Cloth Cap – 25/1. Went off favourite for the race last term, but was pulled-up. Has been a shadow of his former self this season.

31 Snow Leopardess – 8/1. Remarkable mare who gave birth to a foal, before returning to the racecourse. She is unbeaten this season and has the credentials for the race having won the Becher Chase over the Grand National fences in December. She would prefer deeper ground, but she is a big contender.

32 Agusta Gold – 66/1. An apt winner during Masters week, but he was beaten at Downroyal last time out, having previously been pulled-up on his first two runs this term. Oppose.

33 Phoenix Way – 66/1. Successful at Ascot in January, he fell at Kempton last time out and he looks another for which stamina is a legitimate question mark.

34 Deise Aba – 66/1. Stays longer that the mother-in-law, with Sandown one of his favourite tracks. His jumping can sometimes be his weakness.

37 Death Duty – 40/1. Sneaks in at the bottom of the weights and is a definite player. He won the Grand National Trial at Punchestown in February and may just be crying out for this stamina-laden test.

38 Domaine De L’Isle – 100/1. Fourth over these fences in December’s Becher Chase, but he was well-beaten over as similar marathon trip in the Eider Chase at Newcastle last time out.

39 Éclair Surf – 14/1. A serious player who gets in at the bottom of the weights. Second in the Eider Chase last time out, he had previously won the Classic Chase, with stamina definitely his forte.

40 Fortescue – 33/1. Scored at Ascot last time out and shapes as if he should stay. Testing ground would play to his strengths.

41 (Reserve) Commodore - 33/1. Would appreciate testing ground and scored in good style at Cheltenham in December after wind surgery. Interesting if able to sneak into the race.

This is a cracking renewal of the world’s most famous chase with a host of contenders in this event who bring top-level form to the table. It would a great story for Minella Times to win the race again for Rachael Blackmore, but it looks a tough ask off top-weight. Snow Leopardess is greatly respected given her experience over these fences, but she would need testing ground to be seen at her best. Bobbyjo Chase 1-2 Any Second Now and Escaria Ten are undoubtedly serious players. The former was third in the race last term after meeting trouble in running and should go close. Longhouse Poet is another fascinating runner for his shrewd trainer Martin Brassil, whilst Gordon Elliott’s Delta Work and Death Duty both look of interest given their stamina-laden credentials. Éclair Surf is a fascinating runner given he gets in towards the bottom of the weights, whilst last year’s fourth Burrows Saint is another to note.