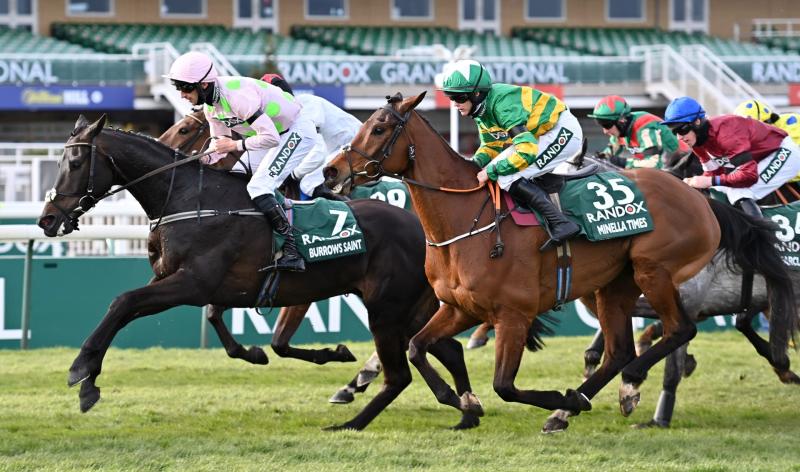 The third and final day of the Grand National Festival of course sees the world’s most famous chase take centre-stage at 5.15pm. However there is an excellent supporting card which includes Stayers’ Hurdle hero Flooring Porter.

The action begins at 1.45pm and concludes at 6.20pm. You can find the latest odds at Betfair

Third Wind is deeply respected having landed the Pertemps last time out and he takes on Mill Green and Winter Fog who were third and fourth in the race. If The Cap Fits has winning form at the track and is respected. However, preference is for Beauport. He is progressing with every run and despite having to shoulder top-weight here, he is one to keep on side.

Good Risk At All is progressing with every run and is one to note along with County Hurdle third Colonel Mustard. Three Stripe Life chased home Sir Gerhard in the Ballymore last time out and is another to note. However, preference is for Walking On Air. He impressed when scoring at Newbury on his hurdling debut and he looks an exciting prospect.

It’s tough to look past Edwardstone. He was a brilliant winner of the Arkle at last month’s Cheltenham Festival and he should prove too strong for Gentleman De Mee and Third Time Lucki if in the same form.

Flooring Porter retained his Stayers’ Hurdle crown in fine style at last month’s Cheltenham Festival and he is deeply respected along with fellow course and distance scorers Champ and Koshari. However, Thyme Hill was a fine second in the Stayers’ Hurdle and seeks to retain his crown in this event, having run out a game winner last term. He looks sure to go well here.

This is a wide-open event, but Shan Blue has been towards the top of the shortlist. He was arguably disappointing when only sixth in the Ryanair Chase, but he is deeply respected dropping in class. Espoir De Romay looks another leading player along with Commodore. However, Empire Steel has bounced back to form with two solid runs, including when scoring by 16 lengths at Kelso in February and he makes appeal at a bigger price.

We have previewed the race in full in our runner-by-runner guide. However, Snow Leopardess is greatly respected given her winning form at the track. Delta Work impressed when winning the Cross Country Chase last time out and is another to note along with Bobbyjo Chase 1-2 Any Second Now and Escaria Ten. Defending champion Minella Times and the unexposed Éclair Surf are also respected. However, preference is for Longhouse Poet. He won the Thyestes Chase in good style in January and he is taken to give Martin Brassil a second win in the race.

An interesting finale. Lookaway, Western Zephyr Donaire, Crambo, Chianti Classico, Henri The Second, Prairie Wolf and Shomen Uchi all won last time out and command respect. However, preference is for Willie Mullins’ Rath Gaul Boy. He looked a serious prospect when winning on Rules debut at Leopardstown in March and he is taken to come out on top here.