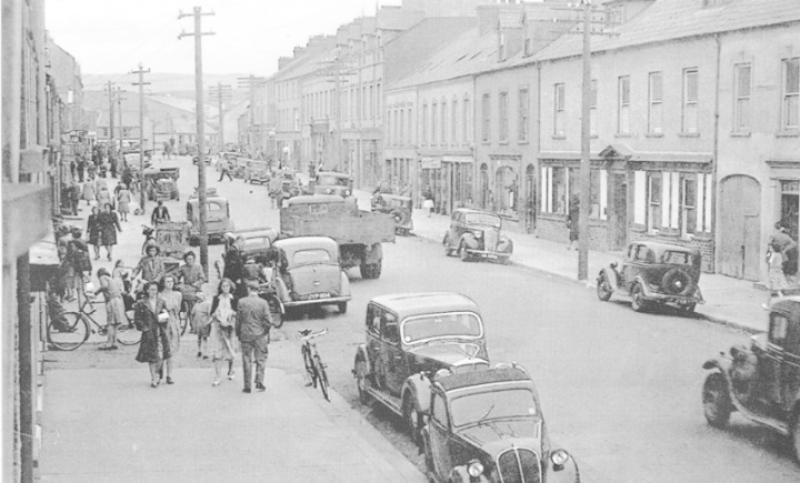 Buncrana Main Street in the 1930s.

“This is social archaeology,” remarked local historian Mari McLaughlin at the launch of the first edition of this book in 2016.

The author Seoirse Ó Dochartaigh’s direct ancestor Patrick (Barney) O’Doherty used to run a spirit grocer shop for generations in the spot now occupied by An Tua Nua pub in the West End of Buncrana, although they originally hailed from Ballyannon in “The Parish”. This was the seed that planted the idea in his mind when he began the project.

One fine morning in the early 1900s Edward “The Miller” Doherty (no relation of Seoirse’s) stirred abroad to take the air in his native town of Buncrana. Starting in the West End, on Hegarty’s Electrical side, he strolled down the east side of the Main Street noting every family and their stories. He didn’t stop until he reached the Mill Row.

At that point, he crossed the road and preceded up the Mill Brae again, noting every family on the way and recalling people and events that were by then becoming just a memory.

Many of the families he mentions are not even in the Census of 1901, presumably long dead by then. Eddie had been looking back nostalgically on the people who had been and gone, as well as on those currently alive.

Edward “The Miller” Doherty’s journey has been extended backwards by Seoirse Ó Dochartaigh to the time of the Famine and beyond; and forwards to the 1963 Electoral Lists. Buncrana was, and is, full of great characters.

Their stories and exploits are recorded here. The story of Buncrana and its people is now, in part, preserved for future generations.

Appended to this much more user-friendly edition of the book Ó Dochartaigh – with the permission of its author, local historian John Farren – is “Walks Around Buncrana”.

John has done some very interesting research here, taking a sideways view of Miller’s “walk-around”, offering many new perspectives and interpretations. It is packed with facts and long-forgotten happenings in his native town.

Although many things have changed since John wrote this it is still a very valuable document. Seoirse has provided a specially annotated map for this walk if people feel the urge to follow John’s footsteps.

Under the guidance of Mari McLaughlin a group of local enthusiasts is already expanding on Seoirse’s work and filling in many of the gaps in Buncrana’s history. This new edition should prove to be a very useful tool for them.

The original manuscript OLD BUNCRANA FROM WEST END TO MILL END by Edward “The Miller” Doherty has been published here with the kind permission of his daughter Mrs. Peggy McGlinchey of St. Egney’s Terrace.

Her grand nephew Thomas (Miller) of Elm Park, Ballymagan, is also to be thanked for his rare photos published in the book as well as his invaluable input.

The book will only be available from “Mac’s” newsagents on Upper Main Street, Buncrana. Someone remarked on seeing this very polished production that it would make a fine coffee table book and that it should really grace every sitting room in Buncrana.