Lauren thanks Donegal people for generosity towards Becky's Orphanage 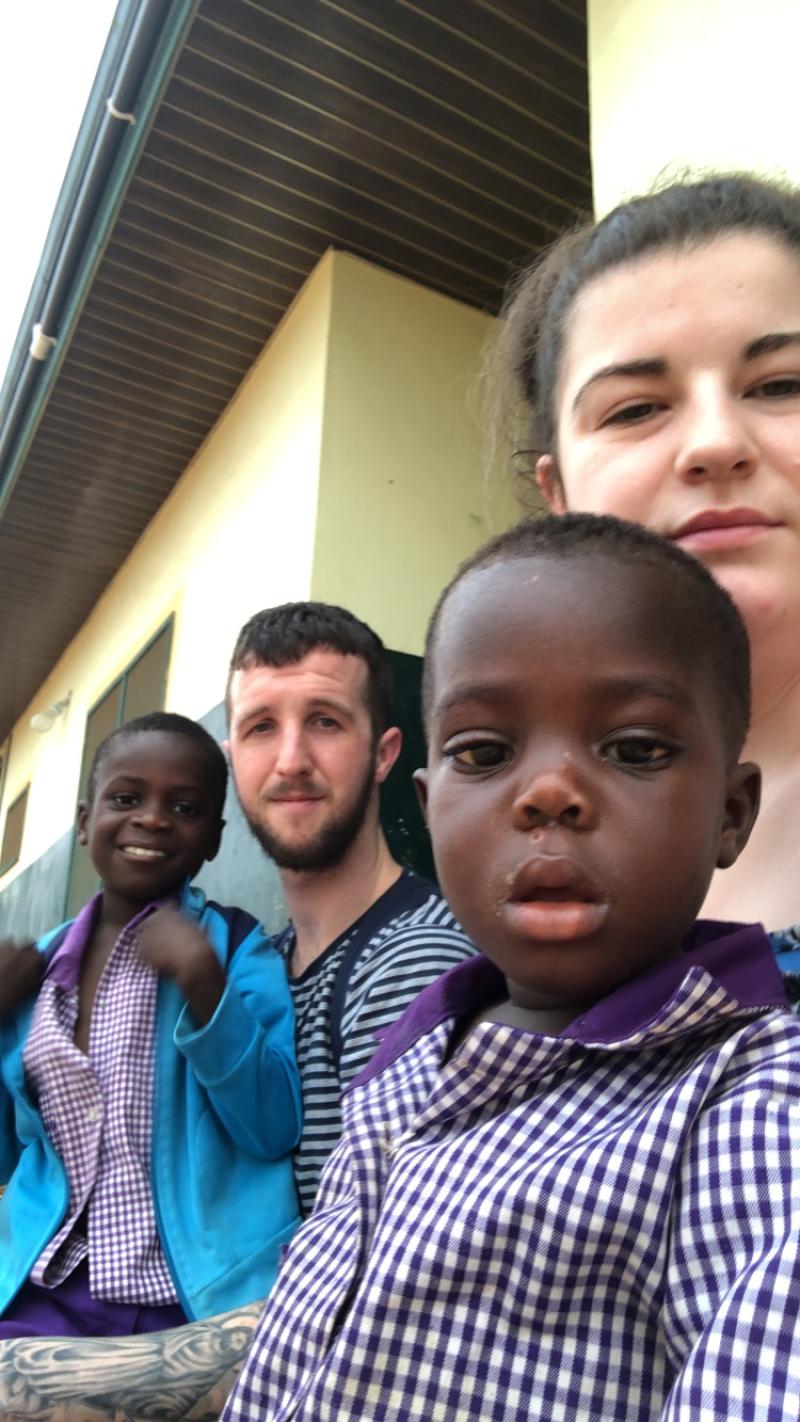 Donegal's Lauren and Darian volunteering at Becky's Orphanage in Ghana

A kind-hearted Inishowen woman who was able to volunteer in an orphanage in West Africa, thanks to the generosity of her local community, has shared her experiences with Donegal Live.

Back in December, Lauren Toye, was successfully fundraising in Quigley's Point, so she and her fiancé, Darian Moore, could volunteer in Becky's Orphanage in Ghana, which was home to 53 children.

We caught up with Lauren when she returned to Ireland.

Lauren said: “Darian and I set off for Ghana on February 10 and returned home on February 24. We were volunteering with two young women from England, Isobel and Sarah.

“I was amazed by everyone's generosity. We managed to raise more than €2,000. We received brilliant support from people from all over Donegal, Derry and Leitrim.

“With the money raised, we were able to buy: a deep freezer for the food to be kept fresh; a blender; six drying lines; 30 new uniforms for the children who did not have any; five footballs; one handball; a small MP3 player for music; and a contribution of 1,000 Cedi towards the repair of the children's school bus. [1 Ghanaian Cedi equals 0.16 Euro.]

“We also paid for Precious to have her hair re-braided. Precious is the only girl in the orphanage to have long hair as she originally came from South Africa. We then used the rest of the money to buy ice cream, crackers, pineapple and other treats for the children from day to day,” recalled Lauren.

Acknowledging everyone who helped in her mammoth fundraising effort, Lauren thanked her family and friends especially.

She added: “I would also like to thank Fr Mailey in Drung; Quigleys Point Community Centre; Sainsbury’s in Derry; and Debbie, who is the manager of Lidl in Buncrana). That is not forgetting anyone who helped out in any way at fundraisers, by donating prizes or coming along to events. Thank you all from the bottom of my heart. Even the smallest donation made a huge difference in Ghana.”

An average day in Ghana for Lauren began at 5.00am. 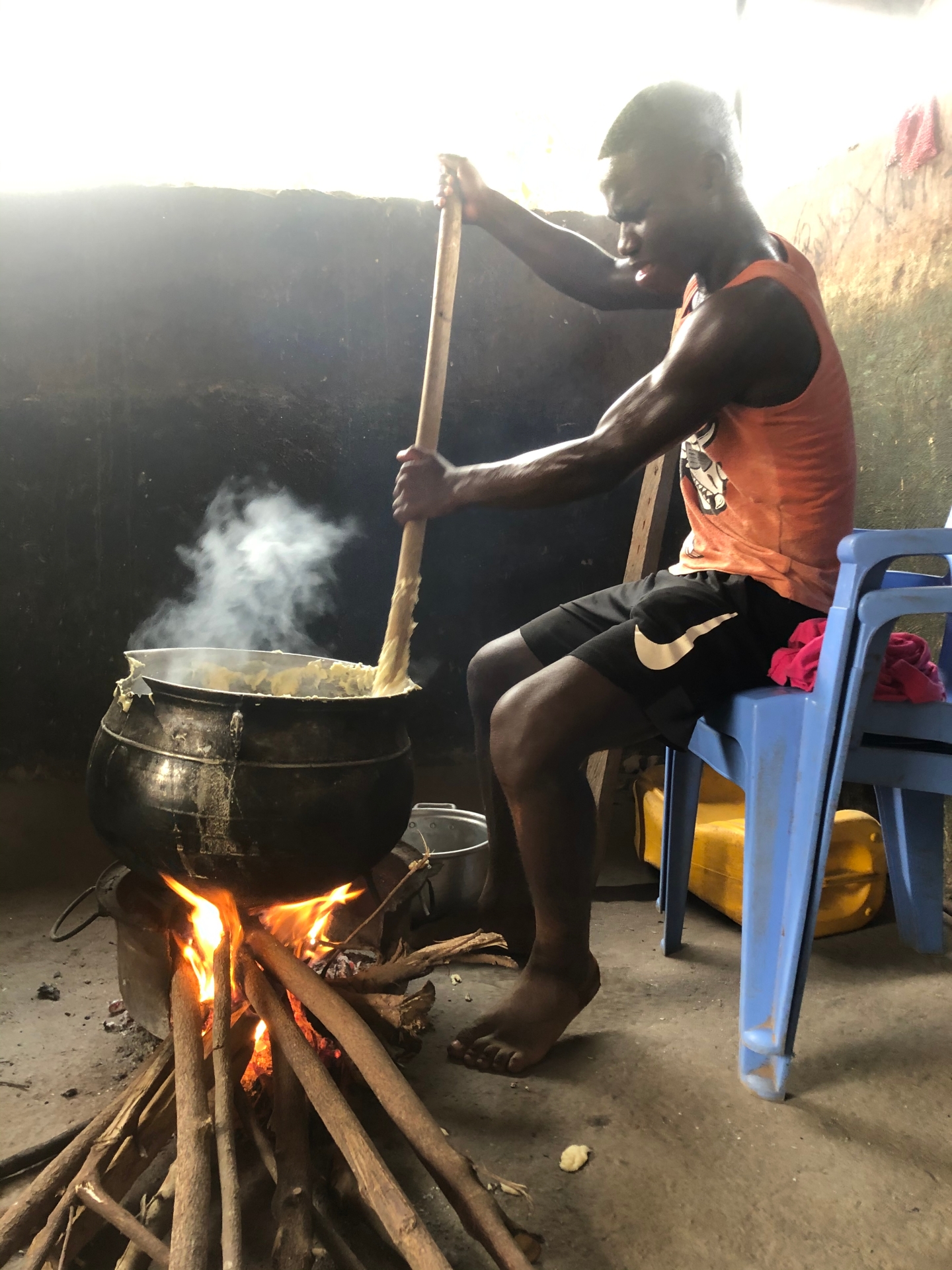 She recalled: “We usually arrived at Becky's Orphanage at 5.30pm 0r 6.00pm, depending on the taxis. We stayed about a 10 minute drive away from the orphanage.

“When we arrived, we helped to get the children ready for school and had 'morning cuddles' with the younger children. We went on the school bus with the children. There were about 45 children, four volunteers and our the driver squashed on a 25 seater bus but we made it work.

“Then it was back to school to get the children onto the bus and back to the home. Because their own bus was broken down, we had to rely on taxi buses from the village, which were not always readily available when we needed them. For a few days, we had to wait to 4pm for one to arrive,” said Lauren.

But it did not stop there. Back at the orphanage, it was homework, with the younger children playing or watching TV.

Lauren said: “The older children usually helped with cooking dinner. I tried to help one day but it was the hardest thing. They cook in an outside hut. They light a fire in an old wheel alloy and cook in a huge pot. If the heat doesn’t get to you, the smoke in your eyes will. It wasn’t the easiest dinner I ever helped cook.

“We usually left the orphanage around 6.30pm but a few evenings we were lucky and the taxi was late so we could stay longer.

“Volunteer safety was paramount at Becky’s, so when the mosquitos came out, we went in. Back at the volunteer house, we could have dinner, get cleaned up and then the night was our own.

“We never ventured out much at night because of the mosquitos as well as the power cuts. The whole village would be in darkness. It would be very difficult to navigate your way,” said Lauren. 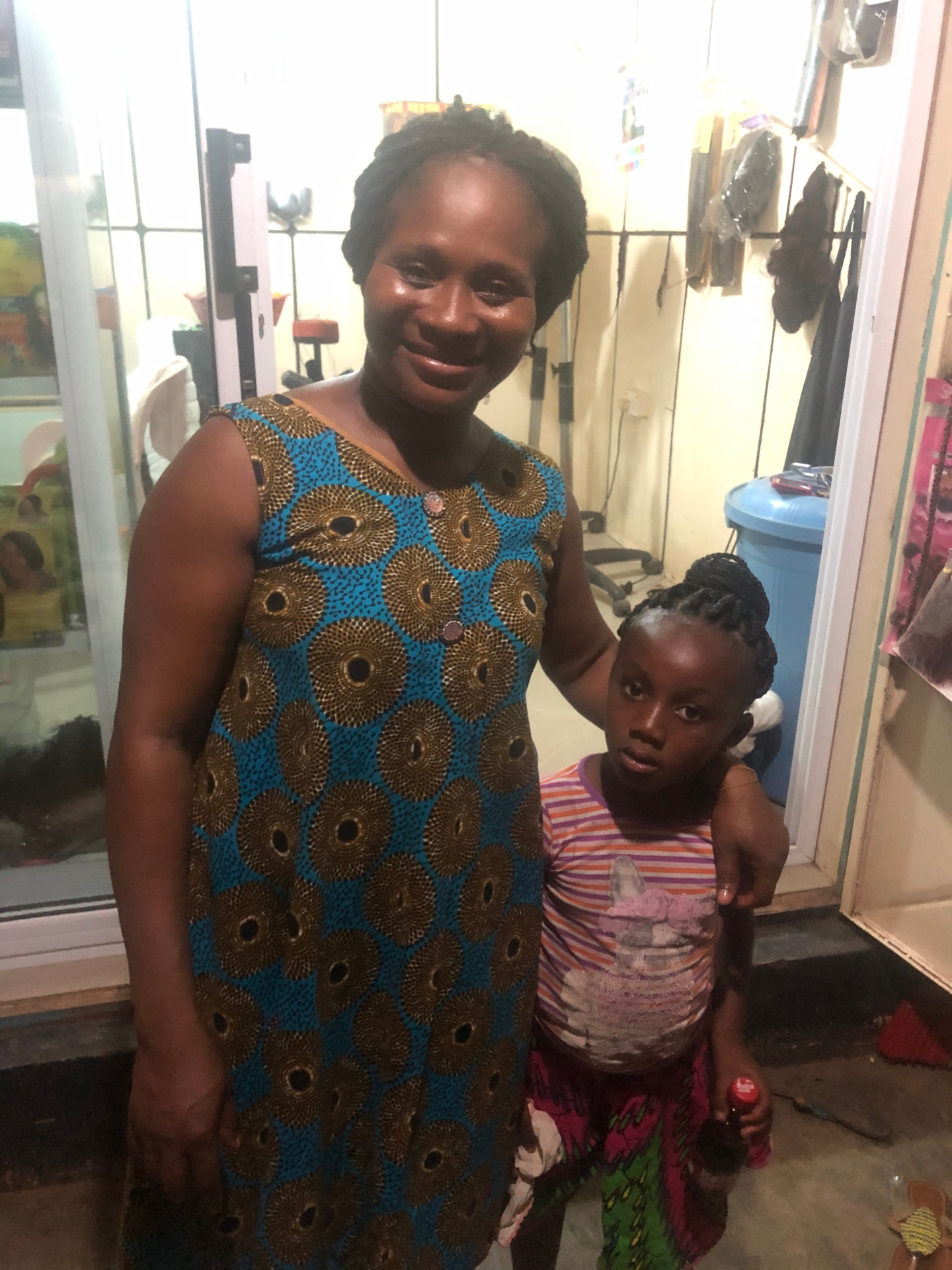 Without hesitation, Lauren described her trip to Ghana as “the most amazing experience.”

She said: “It was the most amazing experience we’ve ever had in our lives. Getting to spend 2 weeks with these beautiful children. At first it was difficult, seeing some sights was hard. What people live in, children on the street in rags, being sent to school with no breakfast or lunch. The children from Becky’s Orphanage are lucky as they will at least get their three meals a day.

“People with no running water and power that would often go off also took a bit of getting used to. Although, washing from a bucket of cold water did become something I looked forward to and was quite refreshing.

“Being able to see the joy from the children when you came to see them at the school and orphanage, how a small piece of pineapple brightened their day and even just the enjoyment they would get from sitting beside you, would melt your heart!

“Of course, with the money we raised, we were able to do a lot for the children, but what we left with was so much more. We have learned how to appreciate the simple things in life; to be grateful for everything we have here at home; and to never take anything for granted here,” said Lauren.

Lauren remarked that a lot of the people she met in Senya had very little but they were so happy, carefree and their faith never faltered.

She added: “The children at Becky’s Orphanage and the people of Senya Beraku have changed us..forever. Leaving was heartbreaking.. there was so many tears from both us and the children. There were a few that we definitely made great friendships with and seeing them shed tears, broke my heart.

“Since being back home, there isn’t a day I haven’t sat thinking about them, the fun we had but also worrying about them. Although, they are perfectly safe and well looked after at Becky’s, I still don’t like not knowing what they’re doing most of the day.

“I would definitely go back, maybe in February 2021, hopefully for a bit longer all being well. Two weeks was great, but definitely not long enough. And, I would encourage anyone who has the slightest thought that they would want to do something like this, to do it. You will never regret it and it will change your life.

“Parts of it will be tough, especially at the start but you’ll soon get used to the life and the joy that the children will bring you, will by far outweigh the sadness. I would love to see more people from the local area go out to Senya Beraku so they too can experience how absolutely amazing these children are,” said Lauren.

Between now and February 2021, Lauren said she would love to be able to raise even more than before.

“We could fix the fans in the children’s rooms; invest in educational supplies and equipment; and security for around the orphanage. There are so many different things we could do with that much money there. Things that we take for granted here at home.

“Personally, I would love to see the local underage team in a new football kit. This would be a real treat to them as they are currently playing in an old one. Maybe we’ll attract a local business or a couple businesses that could sponsor a kit or make a contribution. This would just be a treat for the children in Becky's Orphanage.

“Really, I would just encourage anyone who would like to do something like what we done, to do it. And I would ask people to support us on our next trip, it makes a real difference in the lives of so many in Ghana. And if you donate, you can see directly where your money is going and the faces of the actual people you are helping. We have a Facebook page ‘Our Becky’s Hope Trips’ where we post all our updates and you’ll also see pictures from our first trip,” smiled Lauren.