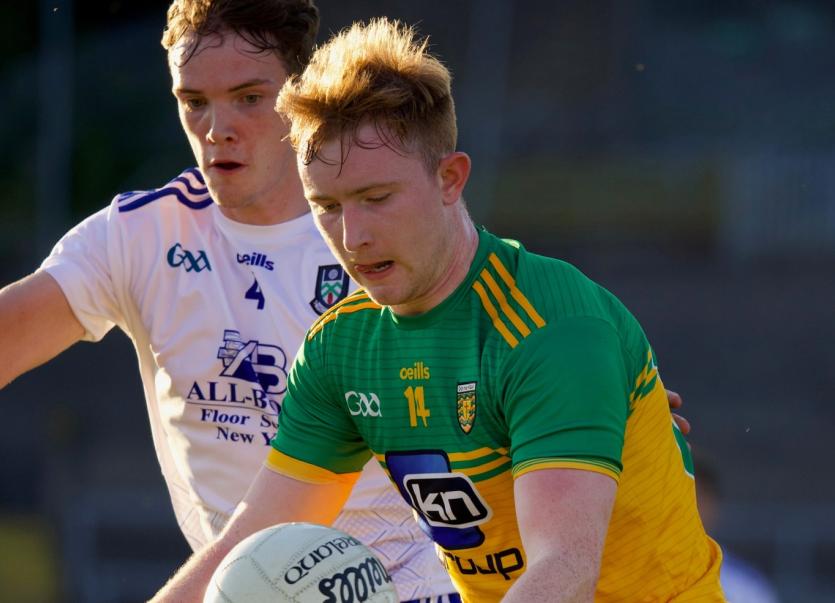 Monaghan stormed back from an interval deficit of five points to produce a storming second half with Donnach Swinburn scoring a hat-trick that dumped Donegal out of the Eirgrid Ulster U-20 Football Championship.

At half-time Donegal were 0-9 to 1-1 in front with Monaghan having not even scored from play and the talk at the break was not of how, but of how many, in what appeared to be a one-sided semi-final.

We’ve all heard the game of two halves cliche - if there’s a manual ever printed this match might well be part of the publication.

That sentiment probably wasn’t what was being spoken about in the Donegal dressing-room, while Monaghan had to gamble on the fitness of Sean Jones, whose introduction - he kicked four second half points and lit up the forward line - turned the game. Donegal had no answer.

From five up to five down by the start of injury time, Donegal, who had misfired with six second half wides, were thrown a lifeline when Ryan McFadden blasted a close-range free perfectly into the postage stamp top corner for a goal with half of Monaghan and the surrounding areas in the small square.

However, as Donegal pressed for the most unlikely reprieve, Swinburn stole away to hit his third goal of the evening and send the Monaghan support in Enniskillen into raptures. They now play Down, who defeated Fermanagh, in the final.

Three early points settled whatever nerves the Donegal side might’ve had, with Johnny McGroddy on the mark twice - from a free and then a mark - before Shane O’Donnell scored from play, all inside of five minutes.

Monaghan’s case wasn’t helped when Jason Irwin was black-carded, although they got in behind the Donegal defence when Brendan Og Duffy found space. Although the wing-back’s shot was saved by Daithi Roberts in the Donegal goal, Duffy was foot-tackled by Jamie Grant as he went for the rebound and Swinburne scored the penalty on 13 minutes.

A minute later, Darragh Dempsey tucked over a free and despite having controlled little of the contest, Monagan led 1-1 to 0-3, only for Rory O’Donnell, the Donegal captain to even it up by the end of the first quarter. Joel Wilson, at centre-field for Monaghan, was also in the sin-bin by then.

Andy Callan’s Monaghan side had overcome a decent Derry team in the last eight at Celtic Park, winning 2-9 to 2-11 seven nights’ beforehand. They were without Aaron Mulligan, part of the senior set-up, while Jones was not fit enough to start. The Farney County had won back-to-back Ulster minor titles in 2019 and 2018, and Jones would play his part.

Donegal, who saw a couple of attacks break down, got into their groove with four unanswered points in the third quarter, with Keelan Dunleavey, O’Donnell, Jack Gallagher and a brace from Padraig McGettigan - the last score of the half, drilled over from the right flank, seemed to emphasise the Donegal supremacy.

Paul O’Hare had become the third black card of the half. Donegal manager Gary Duffy, though, would’ve been more than content to see his team go in with a 0-9 to 1-1 advantage, having also not conceded from play. A block from wing-forward Ryan McShane right on time at the feet of Swinburne showed the level of intensity  and desire.

However, Duffy would’ve been mindful of the way Tyrone forced their way back into the quarter-final last week, with a Roberts save vital in the eventual 1-12 to 1-9 victory.

Monaghan broke their duck from play with scores in the third quarter from both Dempsey and Shane Slevin, either side of a McGroddy point. However, with Donegal passing up on three scoreale chances, Monaghan got right back into the match with a point from Shane Hanratty, before Swunburne blasted past Roberts on 43 minutes.

That levelled the match at 2-4 for Monaghan, 0-10 for Donegal and alarmingly for those from the north-west, they had lost all the initiative. Frees from Jones, just on, concluded the third quarter, with Monaghan 2-6 to 0-10 ahead.

That tide swept into the fourth quarter, with Jones scoring a peach from distance and then Darragh McElearney got in on the act, leaving Monaghan in as good a place as they might’ve imagined at the break, 2-8 to 0-10 up.

A Rory O’Donnell point did settle Donegal a bit, it was only their second score of the half, coming on 49 minutes. Ronan Grimes, the Monaghan full-back, stole in to punch over and keep Donegal at distance of four points. However, with Jones popping over his fourth, Monaghan held off the rally from Donegal following McFadden’s goal to book their final tickets.