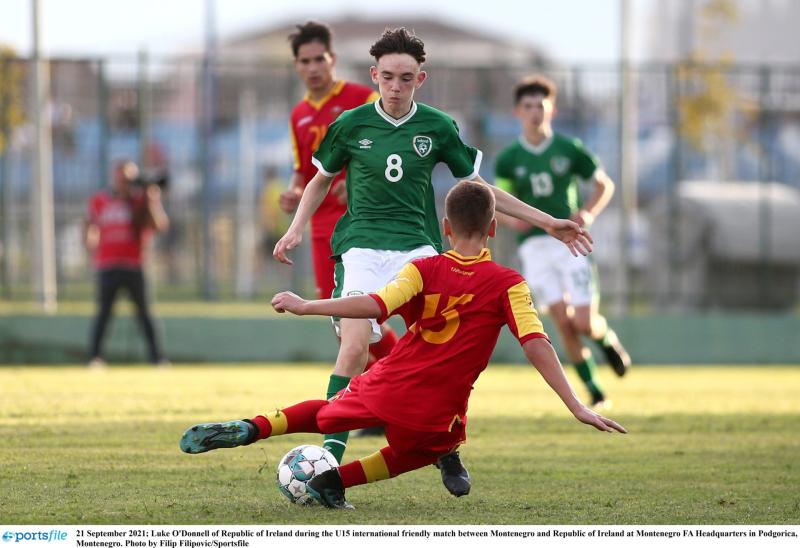 Republic of Ireland Men's Under-15s began their season with an impressive 2-0 victory over Montenegro in Podgorcia on Tuesday.

Goals from Cork City’s Cathal O’Sullivan and Shamrock Rovers’ Darragh Marshall gave Ireland the win in the first of two friendlies against the nations this week.

Buncrana native O’Donnell is a former student of St Oran’s NS, Cockhill, and is on the books of Derry City.

Head Coach Jason Donohue handed Cork City midfielder O’Sullivan the captaincy in his first international appearance and 10 minutes into the game the skipper repaid his coach's faith by opening the scoring.

Christian Donlon Goncalves played a beautifully-weighted ball for Darragh Marshall down the Ireland right, Marshall squared it to O’Sullivan, who broke from midfield, and he was able to clip the ball over Laza Mrkaic in the Montenegro goal for the opener.

Six minutes later it was two for Ireland. O’Sullivan put in a dangerous in-swinging ball from a wide free kick and Marshall got the faintest of touches to guide the ball home to make it 2-0.

It could have been 3-0 in the 37th minute. Richard Vodo picked out Donlon Goncalves with an excellent pass and the Mayo Schoolboy League forward outpaced the defender but saw his effort saved by the Montenegro keeper.

The second half saw few chances for either side with numerous changes made and neither goalkeeper called into action.

It was to be the homeside who would create the only clear cut chance of the second half and that came in the 74th minute. A corner into the box wasn’t dealt with by Ireland with an attempt on goal striking the post. In the resulting goal-mouth scramble the ball fell free to Lazar Martinovic who, from eight-yards out, could only head over.

Ireland saw out the game to secure the away win and get their season off to a positive start. The two teams meet again on Thursday.