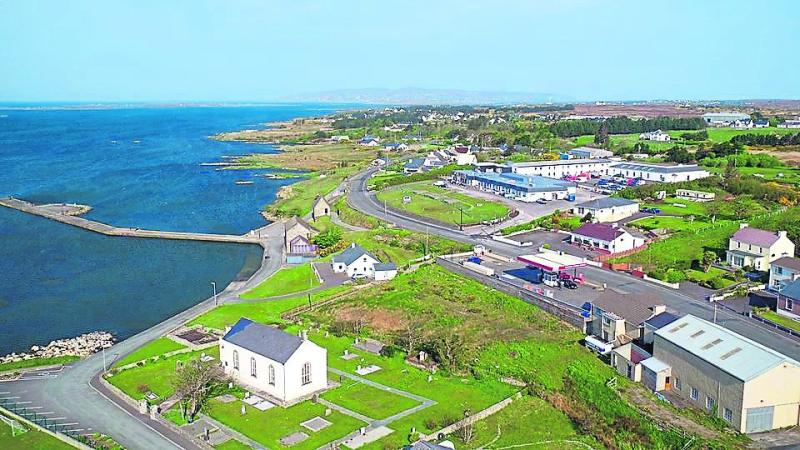 Concern has been expressed about the water quality in Dungloe Bay

Concerns about potential health and safety hazards for locals and holidaymakers using the scenic Dungloe Bay area have surfaced this week.
The presence of numerous faeces and brown oily sludge floating in the water has prompted a call for action from all the relevant agencies.
A daughter of popular television personality and broadcaster, the late Gay Byrne, has voiced concerns about an area her family has had close attachments with over the years.
The Byrne family have been coming to this part of the county for decades but are now falling foul of a sewage crisis.
In her letter to Donegal County Council, Irish Water and the Environmental Protection Agency Crona Byrne, outlines her concerns and the potential damage that is happening due to the discharges into the bay.
"Our family have swum in Dungloe Bay for over 50 years. Since May 2021 we have noticed unsightly discharges that have been present in the bay, from Nancy’s Harbour right over to the pier in Dungloe, it may go further out but we have not been in other parts of the bay, in our opinion the discharge water coming from the outlet of the sewage treatment plant into Dungloe Bay is the cause.
"This is both distressing and of huge concern to the health and welfare of not only my own family but residents and tourists who would want to use this wonderful natural amenity.
"Due to the discharges the quality of the water means that in my opinion it is not safe to do so.
"My husband and son have both had after effects after swimming in the water on the Quay Road and the pier below the Waterfront Hotel and Nancy’s Harbour in Tubberkeen.
"We believe that there have been issues in the past couple of months with the treatment plant and would ask what remedial work is being carried out to rectify this." 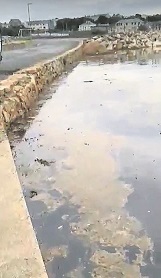 Unsightly and smelly waters off the pier in Dungloe

She included pictures with dates of the discharge items we have noticed over the last few months.
"In these you will see brown oily sludge and in other pictures clearly visible faeces in the water and on the on the 24th of July there were numerous faeces floating in the bay. As I am sure you are aware, this is a huge health and safety matter that needs urgent attention."

Remedial work
She also asks the council for a full report of the issues and remedial work that has and will be carried out to rectify the issues causing the discharges into the bay, so that their beautiful Dungloe towns image is no longer tarnished due to visual issues and possible health issues.
Local councillor, Micheál Choilm Mac Giolla Easbuig said he has requested a meeting with Irish Water in relation to the sewerage treatment plant in Dungloe and the potential damage being caused for everyone.
"I have raised and will continue to raise these concerns until answers are forthcoming and the pollution is halted," he said.

Another councillor, Noreen McGarvey added that she too was aware of the problem and had referred the matter to the council's environment section and to Irish Water. She added she was surprised the pollution was happening in view of the fact a modern sewage treatment plant had been provided in Dungloe in recent times.
She added she had requested the council to carry out tests and knew they had been out on Tuesday and tests would be available later in the week.
"All councillors in the Glenties Municipal District have been working to find a resolution to this problem," she said.

Donegal County Council has issued a standard confirmation that the incident referred to is being investigated but nothing else. They have not been drawn in by Irish Water's claims.
In their response to our queries they ask the public to help them deal with such matters.
“Donegal County Council (DCC) can confirm that an environmental complaint in relation to discharges to Dungloe Bay is being investigated.
"DCC would like to thank members of the public who report environmental concerns.
"DCC also encourages anyone with similar concerns or information on discharges to bring these to the council’s attention on (074) 91 53900 from 9am to 5pm Monday to Thursday and 9am to 4.30pm on Friday or via e-mail on info@donegalcoco.ie.”

Irish Water claims raw sewage discharges not of their making

Irish Water has claimed that the raw sewage discharges to Dungloe Bay are not related to Irish Water infrastructure and if known, their source should be reported to Donegal County Council instead.

In a statement it sets out what it understands is happening.

"Wastewater from the Irish Water network in Dungloe is pumped to the Dungloe Wastewater Treatment Plant where is it treated to secondary treatment standard and thereafter discharged to a sea outfall pipe in Dungloe Bay.

"The final effluent that is discharged is a clear liquid with no visible colour or suspended matter.

"In wet weather conditions short duration stormwater discharges can also occasionally occur which are discharged to the Dungloe River near the town centre car park.

"These discharges are diluted and screened and within the assimilative capacity of the Dungloe River. All discharges are regulated by the Environmental Protection Agency (EPA) under Urban Wastewater Discharge Authorisation Regulations."

The company also claims that the discharges described are not representative of those produced and discharged by Irish Water to Dungloe Bay and in that context Irish Water does not consider them to be related to its infrastructure.

"It is possible that there are raw sewage discharges to Dungloe Bay that are not related to Irish Water infrastructure and if known these should be reported to Donegal County Council Environment section.

"It is also possible that the discharges witnessed are naturally occurring and unrelated to wastewater," their statement ends.