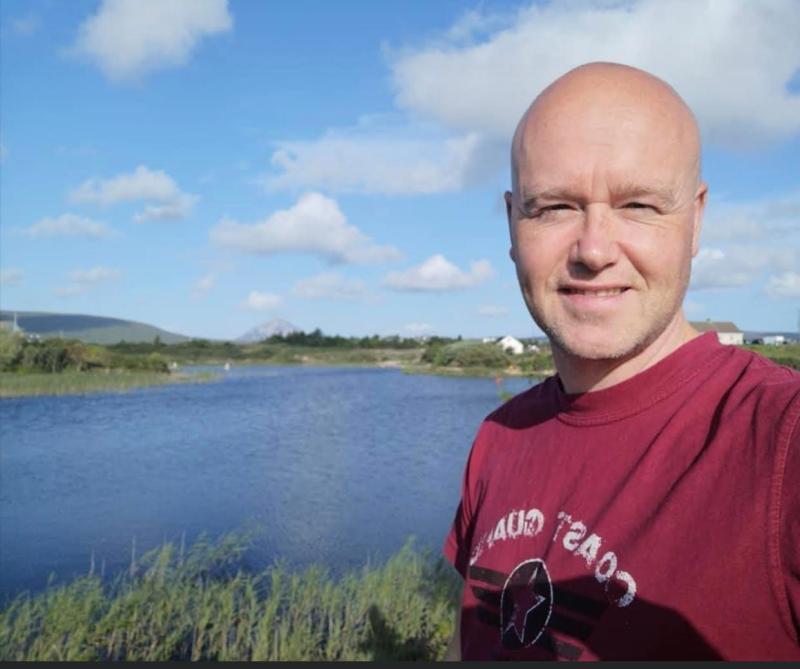 There are people who become the driving force behind the Irish language, they nurture and cultivate it to the point where it is rooted and strong enough for the next generation to carry it to the next. Oisín Mac Eó is one of these people.
It is with an abundance of passion, a wealth of experience and a burning ambition to see the Irish culture and language continue to thrive and flourish in Rann na Feirste that attracted Oisín to the position of manager of Áislann Rann na Feirste - a position he readily steps into this September.

Building on work of previous managers

The father-of-three said the áislann and the community of Rann na Feirste were what attracted him, and his family, to live in the area.
The Derry-native and his family have lived in the Rosses area for three years.
He is very much looking forward to starting his new position and hopes to build on the great work carried out by both Aodh Mac Ruairí and Aodh MacEamharcaigh who were managers before him.
He recalls the first time he visited the áislann with his family. He was enormously impressed by the amount of events that were taking place in the area.
In later years he would bring school tours to the area where he enjoyed the school children being able to hear Irish being spoken.

He also highly commended Bríd Anna Ní Bhaoill who does so much in the area to support and to nourish the art of storytelling, poetry, song and oration.
The highly-contested competition ‘Abair Amach’ was something that he felt gave young students the opportunity to compete with other students through the medium of the Irish language in a fun environment.
His three sons Dónal Ciarán, Dáire and Seosámh attend the local national school in Rann na Feirste.
The three young boys enjoy all the area has to offer and have become very much part of the community.
Oisín is enjoying watching them grow up in the Gaeltacht surroundings, enjoying new friendships and exploring all the countryside has to offer.

Derry
Oisín grew up in Rosemount in Derry where he received both his national and secondary education before attending St. Mary’s University College in Belfast where he qualified to become a teacher in 1999.

Oisín enjoyed working as a teacher and after having spent a while teaching at a naíscoil/infant school in Derry parents came to him and said they would like to send their children to a national school that taught through the medium of Irish if one were to become available in the area.
Oisín rolled up his sleeves and decided to establish one that would facilitate the needs of the parents, in the area, and as a result of his hard work Gaelscoil na Daróige was established.
Over the years, the school has gone from strength to strength and now around 100 pupils attend.
This year, it is estimated that around 20 new students will enroll at the popular school.
The school is described on its website as “a vibrant Gaelscoil located in the heart of the Ballymagroarty area that offers the highest standard of educational experiences for each child. We emphasise the holistic development of each child in a fully immersed Irish language setting.”
The school, where Oisín subsequently became principal, was the third such school to be established in Derry.
Oisín said he enjoys working on a concept that was visualised by the people for the people and that he was able to be part of that concept.
This is an ideology that he will work to his benefit in the Gaeltacht area where there is an appettite for the Irish language to grow and blossom.
Oisín was also one of the first members of the teaching team on the Gaelscoil in Buncrana.

Ciarán Mac Giolla Bhéin of Conradh na Gaeilge told ScopeNI: “The benefits of bilingualism, or multilingualism, have been well documented and proven time and time again in a vast number of studies from around the world – especially early-age bilingualism.
“It’s a matter of cognitive development. Children with a second language do better at maths, they have more empathy and are more tolerant of others.”
Oisín said each area is different in terms of language and language development and said he is looking forward to seeing the results resulting from ongoing work.

Four people rescued after yacht runs aground in dense fog