Final proposals to be presented to Government officials on Friday 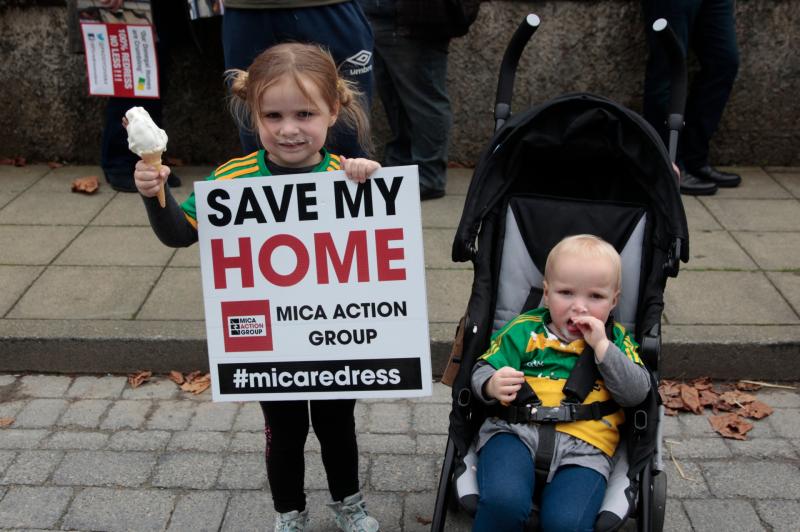 Éire and Molly Burke from Carndonagh at the mica demonstration in Lifford on Saturday PICTURE: BRIAN MCDAID

Representatives negotiating on behalf of Donegal families affected by mica will present their final proposals to Government officials on Friday as the deadline for a report from the working group on the crisis approaches.

The working group, set up by Housing Minister Darragh O’Brien in June to find a solution to the crisis sits again on Friday.

A demonstration in Lifford on Saturday heard further calls for the Government to deliver 100% redress for affected families as the deadline for a final report from the working group at the end of the month.

Eileen Doherty, a representative of Donegal families affected by mica, said the negotiators will be presenting the final details of their proposals to the officials on Friday.

Negotiators will be presenting a comprehensive document on what they expect from a new defective blocks scheme which will be made public on Friday.

“We had to go away and quantify what we mean,” she said.

“We are putting forward to the department our final position on what it is we want for families. We will be saying ‘we need all of these things in place - this is exactly what we need back’.”

Ms Doherty said the group will not be moving from the final position.

The process has been delayed amid concerns from campaigners that the Government will not guarantee 100% redress. A deadline of the end of July put in place by Minister for Housing Darragh O’Brien for the group to report has been pushed back to the end of September.

The concerns at the stance of officials from the department has seen several representatives walk away from the process.

The working group was established to address concerns about the Defective Blocks Grants Scheme. Affected homeowners say the 10% of the cost that they must carry puts too much of the burden on them.

The defective blocks scheme has a €275,000 cap on costs but the group is proposing a system where the capped cost is worked out in relation to the size of the home involved.

Ms Doherty said there is “a big gap” between what the families want and what the department seemed willing to agree to.

“There are things we can’t move on. We won’t be moving on 100%. We won’t be moving on the fact that there are lots of homes excluded from the scheme currently. This is a way of saying to the Government, ‘negotiations are over this is our informed position from the families and you need to go away and work on how you can deliver this’. That is it.”