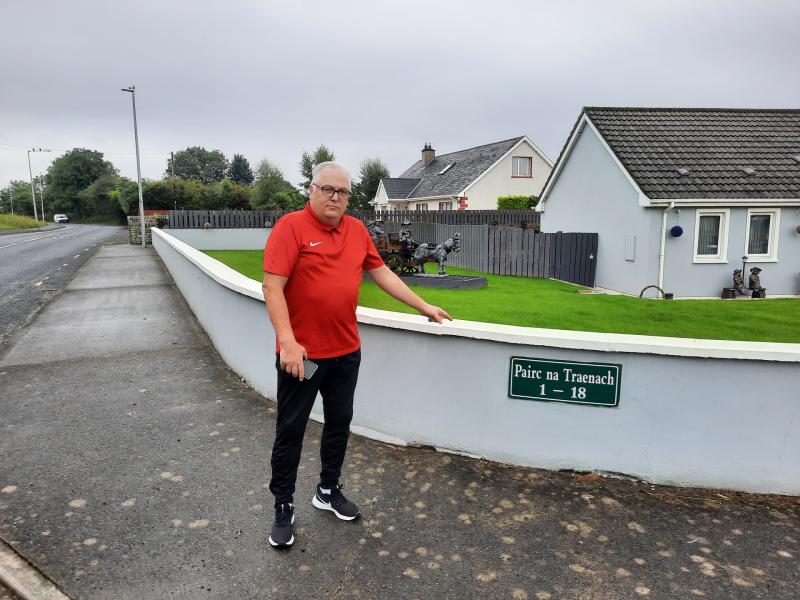 Speaking to Donegal Live, Cllr Frank McBrearty said Donegal County Council bought the houses from a developer at the time of the financial crash.

“Council also leased a number of other houses on the site, built by the same developer, under the 10 year leasing scheme,” Cllr McBrearty said. “I have put in a Freedom of Information (FOI) request now to Donegal County Council asking a number of questions concerning this estate.

“At the time of the purchase, Council more than likely did not know these properties contained mica but, it is my opinion, when the 10 year lease was up with the other properties, the presence of mica was the reason why it did not buy them also.

“Council knew its housing stock contained mica but it did not disclose that to us, the members of the Lifford Stranorlar Municipal District.

“I have asked questions before I put in the FOI but I was getting nowhere. I felt very compelled to find out the appropriate information in the public interest.

“I think when you spend taxpayers money you must have a paper trail. You must be accountable to the public that the Council is representing. I have put in a Freedom of Information request to find out how much the Council paid for these houses.

Cllr McBrearty said councillors had not yet been told whether or not the eight Railway Park houses contain mica.

He added: “However, we know the Council has been doing repairs. We only found that out recently, since we learned this private landlord of the rest of the properties took it upon himself to repair his own houses.

“Council has been doing patch up jobs on the eight houses and the fact is, these houses are now becoming very dangerous. You only have to look today at the gable walls of some of these houses.

“I want to know, how much it has paid out on maintenance and repairs to the structures and what it paid out for the problems they have with sewage in the estate?”

The Raphoe councillor has also requested the entire file on the other houses in Railway Park or any other scheme and any representation made before and after the lease schemes were over and what amount was paid to the Developer over the lease terms.

“I am requesting all the names of staff and councillors in any files regarding this estate, for example, when the area was Letterkenny electoral area prior to May 2009 and Stranorlar electoral area now Lifford/Stranorlar Municipal District. As an elected member of DCC, I am entitled to this information.”

Cllr McBrearty said he was shocked to learn Railway Park had mica.

He recalled: “The last time I canvassed this estate in 2019, the signs were not as bad as they are now. There were cracks but there were not cracks like there are today, so, over a two year period, these houses became ten times worse.

“Previous to that, in the 2014 elections, when I canvassed this estate there was no sign of mica in the houses.

“That is the reality of mica, you do not know it is there until a certain period passes, depending on how bad the mica is, But, by the looks of these houses, they contain mica, and, in my opinion, pyrrhotite.

“First of all, Donegal County Council, in my opinion, legally, is in breach of contract with these tenants.

“Tenants are supposed to be given a house that is safe to live in and that is not the case in Railway Park.

“Second, Donegal County Council should be looking for brand new accommodation for anyone who is living in this type of house and moving them out because of the health and safety implications.

“If you look at that gable today, anyone walking past, if something fell off and hit them on the head, it could possibly seriously injure them or kill them.

“I don't think these houses can be repaired as in an outer leaf repair. I go by what Dr Ambrose McCloskey stated in his letters, and what chartered engineer, Martin Doherty, has said, especially what he said on Primetime, which was basically, the only solution to these problems with houses coming back with test or mica and other irregular minerals is demolition.”

Cllr McBrearty said he was not aware of any core samples being taken at the houses in Railway Park.

He said: “The key issue here is that somebody has to be responsible for buying all of these types of properties and no-one seems to want to ask the questions, only me. Other councillors have blocked me at every avenue in Donegal County Council from asking the questions that need to be asked.

“My honest belief is, when this particular estate was bought, no-one really knew anything about mica in Donegal. You are talking really about in and around 2006 but, from 2010 onwards, anything bought by Donegal County Council should have been scrutinised, for fear of buying a property which contained mica and it being left on Donegal County Council's books.

“No bank is going to lend money unless you have assets. Are these properties and the ones in Buncrana, but especially the Railway Park ones, secured against any loan books? Do the banks know these properties have mica?

“The same goes for every single property Donegal County Council has on their books that have mica or are showing the signs of mica.”

Cllr McBrearty said the tenants in Railway Park were being treated like “second class citizens”.

He said: “I have spoken to a number of them and they are being basically ignored by Donegal County Council. They should all be written to by the Chief Executive and told exactly what is wrong with their properties.

“In my opinion, and I had a motion passed at the Council, the rent should not be taken from these people until they are rehoused, put into a property that is 100% safe, they can live in and enjoy their lives. That is not happening here.

“These people are worrying night and day about the structure of the properties.

“You can deal with other issues in houses but structural issues are the most serious within any property.

“The question now is are these houses insured for contents if anything happens in these homes? Does Donegal County Council's building insurance stand up to scrutiny? Has it been disclosed to the insurance companies that the houses have mica?”

At the time of Inish Times going to press, Donegal County Council had not provided the requested comment on the houses in Railway Park.