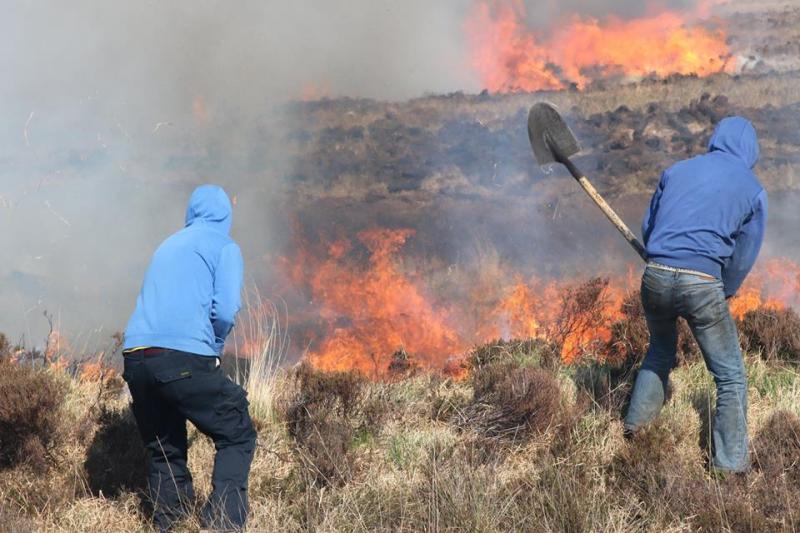 Flashback to the recent gorse fires

Two years ago rapidly traveling gorse fires destroyed property and wildlife and threatened lives in the Rosses area.
Speaking at a recent Glenties Municipal District meeting, Independent Councillor Micheál Choim Mac Giolla Easbuig said that day will not be forgotten.
He told officials that he would continue to fight for a a fire response unit in the area adding that he acknowledged the great work that is carried out by the fire service in the county.
“We need community training,” he said.
He said that a project whereby twenty-five old Irish goats have been relocated to Howth Head, where they will be used to reduce gorse cover in an area that has been plagued by wildfires, should be explored in the Rosses area.
Manager of the herd, Melissa Jeuken told RTÉ: “I’m really looking forward to it. The role is about settling in with the herd and then taking them out on the hill, working as one to tackle the grazing issue. The goats are good at scrub control. They love gorse and will graze on it day in, day out, if they can. So it's a natural way of dealing with the problem.”
Fianna Fáil Councillor Noreen McGarvey supported Cllr MacGiolla Easbuig saying that any avenue that may be explored that would reduce the incidence of gorse fires would be very much welcomed.
Cllr MacGiolla Easbuig said correspondence should be sent to the relevant authority to investigate the matter.
“Anything that saves lives ought to be explored,” Cllr Mac Giolla Easbuig said.