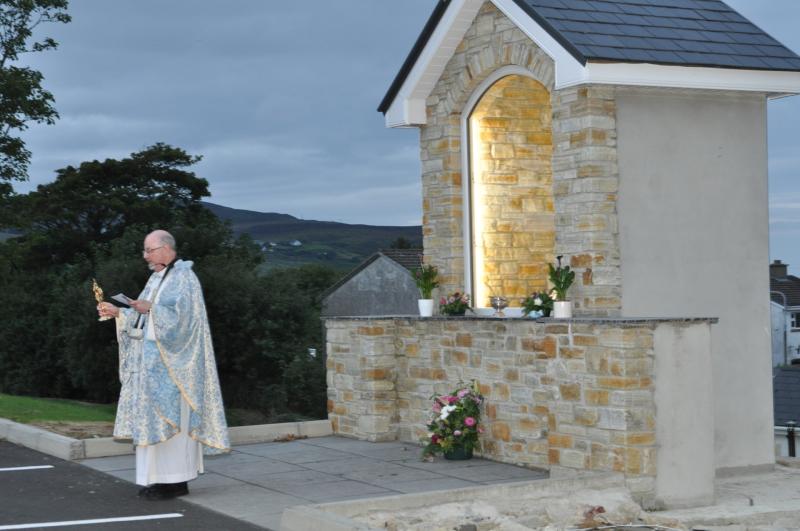 A special Mass of Our Lady of Fatima was held at Holy Cross Church in Dunfanaghy to mark the 104th anniversary of the apparitions of Our Lady in Fatima.
Parish Priest, Fr Martin Doohan, told the congregation of how Our Lady appeared to three shepherd children. She told the children she would cure some sick children who had appealed for her help.

Prophecy
Father Doohan said Our Lady said she would perform a miracle so that all would believe the apparitions to be true. As a result of the prophecy the Miracle of the Sun took place in Portugal and was documented to have taken place on October 13, 1917.
At the end of the Mass a special blessing with the special reliquary of the coffins of Saints Jacinto and Francisco was given.
The assembled congregation then made their way to the grotto which was blessed and the prayer of consecration that was said at the 100th anniversary of the apparition of Our Lady in Fatima in 2017 was recited.
A beautiful reprint of this prayer card was given to all present as a souvenir of the occasion.

Prayer Card
The grotto represents the culmination of two years of planning and hard work. The statue of Our Lady of Fatima was purchased in Fatima at a cost of €2,000. Included in the grotto is a small bottle of Holy Water from Fatima and a prayer card containing soil from Fatima. Two ceramic tiles depicting Saints Francisco and Jacinto, who were canonised by Pope Francis in 2013, are also to be found in the grotto.

Fr. Martin Doohan P.P. concluded the evening by thanking those who made the event possible; Fred McKinley, Falcarragh who built the Grotto under the Rural Social Scheme; Seamus Doohan, Carrowcannon who installed the electrical lighting; Joseph McCafferty Derryconnor who made the roof for the Grotto and Thomas Duggan, Falcarragh who installed the PVC window to the grotto.
Charles McHugh, Hornhead and Andy McGee, Derryreel who helped install the window under the Community Employment Scheme were also thanked.
Gratitude was also conveyed to stewards for the night Neil McGinley, Hornhead Road and Neilly Gallagher, Cottage Road.
Fr. Doohan also thanked those who had provided flowers for the occasion both at the church and the grotto. Patricia Desmond, Portnablagh and Josephine Keaveney, Cottage Road of the choir were thanked along with Charlie Gallagher, Faugher who did the Ministry of the Word.

People of the parish

In conclusion, Father Doohan expressed his deep gratitude to the people of the parish who have expressed a great generosity towards him and the works associated with the overall improvements at Holy Cross Church and the parochial property in Dunfanaghy, since his arrival in 2007.
He said the project had been oversubscribed by voluntary donations and that the monies left over would go to other necessary works to be carried out in Holy Cross Church itself.
The fact that all major works have been done and the debt that had been a burden for years is now cleared is cause to be hopeful for the future in these uncertain times, he said.
Our Lady as mother always looked out for us in the past and will continue to do so in the future, Fr. Doohan added, before giving the final blessing to all gathered in the church car park for the event that was itself blessed with good weather.
On a personal note, and on behalf of the parishioners and visitors who come to Holy Cross Church Fr. Doohan thanked most sincerely Donegal Local Development CLG and its supervisor Patrick McDaid along with Kathleen Gallagher supervisor of the Community Employment Scheme whose workers over the years have transformed Holy Cross Church grounds for the local community and visitor alike to enjoy.