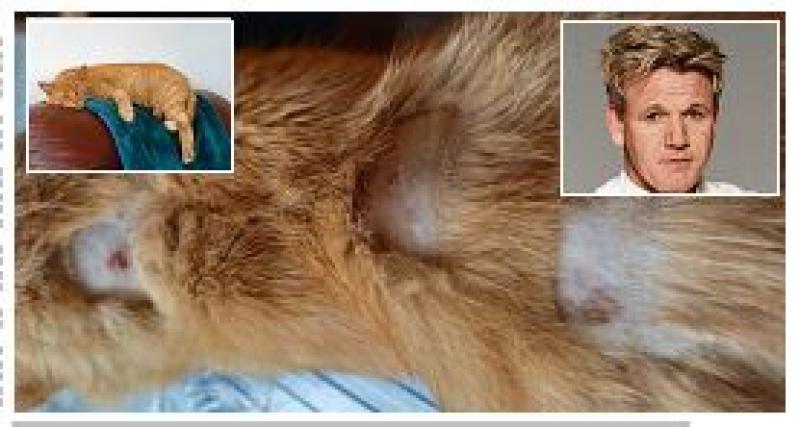 A Ballyshannon woman whose cat has been shot repeatedly and has 17 metal pellets lodged in his body has made an emotional appeal to the person responsible for the cruelty to stop.
'Ramsay', a beautiful five-year-old ginger coloured male cat was named after the TV chef Gordon Ramsay.
His owner had noticed marks on the cat and she has revealed that veterinary scans and x-rays confirmed her ailing much-loved pet had been shot with metal pellets from a BB gun.
The woman, who lives in the Station Road area of Ballyshannon, fears Ramsay may have been trapped and shot at repeatedly with a BB gun. 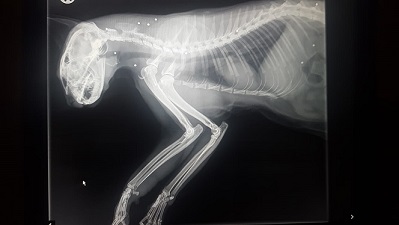 An X-ray of Ramsay shows white dots, most of them around the head area, which are metal pellets. Vets have confirmed there are 17 of these pellets in his body and they cannot be removed

“To think that he may have been trapped makes it even worse and more upsetting for me,” she said.
The owner, who asked not to be named, said: “Ramsay is a friendly, beautiful cat and for someone to intentionally hurt, harm, cause pain, distress, and injury to him is truly shocking.”
She said it worried her to think what else a person who does this might do: “If someone could do this to a pet, then I question what else they are capable of.”
X-rays taken by a local vet show a savage litany of cruelty and the owner was told the 17 metal pellets cannot be removed as they are too deeply embedded in the cat's body and too close to his spine. 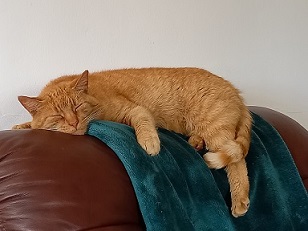 Ramsay chilling in his favourite spot on top of the couch

The X-rays make horrific viewing and clearly show the sickening ordeal Ramsay has been subjected to.
A swelling on his right leg was caused by an entry and exit wound from a metal pellet and a lot of the pellets were quite near his head.
The woman said she doesn’t know how anyone could be so cruel to any animal.
“I cannot get my head around the fact that there is someone out there who is willing to do that to a cat,” she stated.
The woman decided to highlight this cruelty to ensure other pet owners in Ballyshannon are aware of what was going on, to make them aware that there are cruel people out there doing this.
She hopes that those responsible for the cruelty will read today’s article and stop what they are doing.
Meanwhile, the vet confirmed that the last five fresh wounds show the cruelty was ongoing over a period of months. The vet said Ramsay was in a lot of discomfort and at this point all that could be done is to manage the pain.
Ramsay is one of three cats owned by the distraught woman. The cats are all from one litter. Continuing the television theme with their names, Ramsay’s brothers are ‘Gordon’ and ‘Dinozzo’, who is named after Anthony D. "Tony" DiNozzo, Jr., a fiction character from the hit CBS TV series NCIS.
They are showered with love and affection by their owner.
Ramsay remains inside the house for his own safety.
Living in the house is not the life his owner would like for him. Ramsay’s life will never go back to normal and he will never regain his free spirit.
As a result of being kept inside the home for the last four weeks Ramsay remains extremely distressed.
“It has been very difficult for him and his brothers Gordon and DiNozzo, and this saddens me so much,” the owner said.
She confirmed she had reported the cruelty to the Gardaí in Ballyshannon.
“They were very helpful and showed great concern,” she said.
She also confirmed that she had been in touch with the Irish Society for the Prevention of Cruelty to Animals (ISPCA) Head Office in County Longford and also to a representative of the Donegal branch of the ISPCA where she sought help.