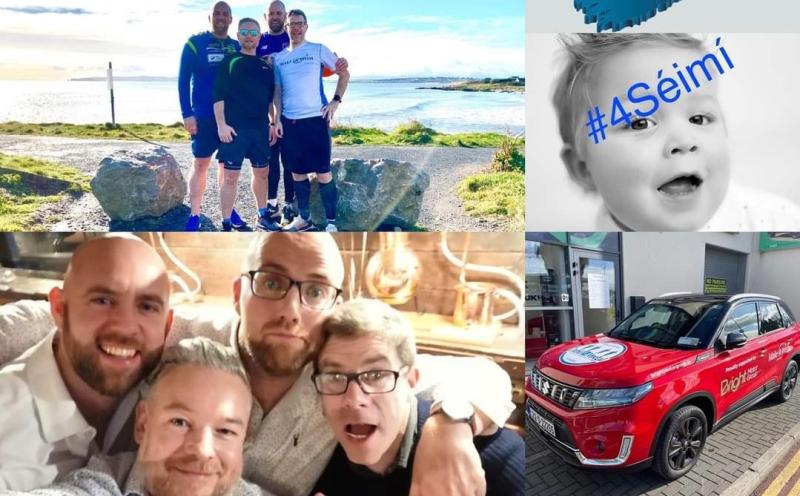 Four Donegal men are in the final stages of training for a mammoth challenge - they plan to complete seven half marathons in seven days.

And it is all for a cause very close to their hearts, the Make A Wish Foundation which grants wishes for very sick children and their families.

Barry Brennan from Donegal Town is one of the men taking part.

He told the Donegal Democrat: “We are doing it in memory of Séimí Brennan, the son of one of the four of us doing the challenge.

“Séimí really wanted a family holiday and this was organised through Make A Wish. But unfortunately, he passed away before the family could travel.

“Our aim is to grant as many wishes as we can to other children in Séimí’s memory.”

Séimí was diagnosed with a brain tumor just a few weeks after he was born. He battled bravely through surgeries and chemotherapy, charming everyone who was lucky enough to meet with his cheeky smile.

Make-A-Wish Ireland organised for Séimí, his Mammy Orna, Daddy Dave and little sister Nia to go away on holidays. Shortly before they were due to leave, Séimí became too unwell to travel. He passed away on September 3, 2017, at just three years of age.

The four men have previously raised over €30,000 by running marathons for the Make a Wish Foundation in Séimí’s memory.

This latest challenge is symbolic in that it starts in Dublin where Séimí and his parents are from. They will complete the challenge on the Diamond in Donegal Town, a place deeply associated with Séimí’s memory.

“Dave and Orna’s favourite photo of Séimí was taken on the Diamond, so it is a special place for them,” said Mr Brennan.

“The family came to Donegal a lot and they really loved it here.

“Dave retrained as a Primary School teacher and spent a lot of time in Gaoth Dobhair. He speaks fluent Irish with a Donegal accent!”

The challenge had initially been planned for April 2020, and has been postponed a number of times due to Covid-19. With the training and preparation involved, it wasn’t easy to keep up the momentum.

But the four men were determined to fulfill their mission to raise another €30,000 to grant special wishes for sick children.

“We talked about different ways we could do the challenge during lockdown, like running all the half marathons in Dublin,” said Mr Brennan.

“But in the end, I’m glad we held out and can stick to the original plan. It will mean a lot to Dave to finish the challenge on the Diamond in Donegal Town.”

The challenge begins at the Sandymount Hotel in Dublin on October 24 and finishes seven days and eight counties later in Donegal Town.

The men are blogging their journey from the training right through to the finish line and they plan to create an online documentary including some of the special Wish Children they meet along the way.

Barry, Dave, Eamon and Eoin have almost reached their €30,000 target. All donations will be greatly appreciated and will help bring light to the lives of some of the country’s sickest children.

Anyone who wishes to make a donation can do so at https://donorbox.org/dublin2donegal-4seimi