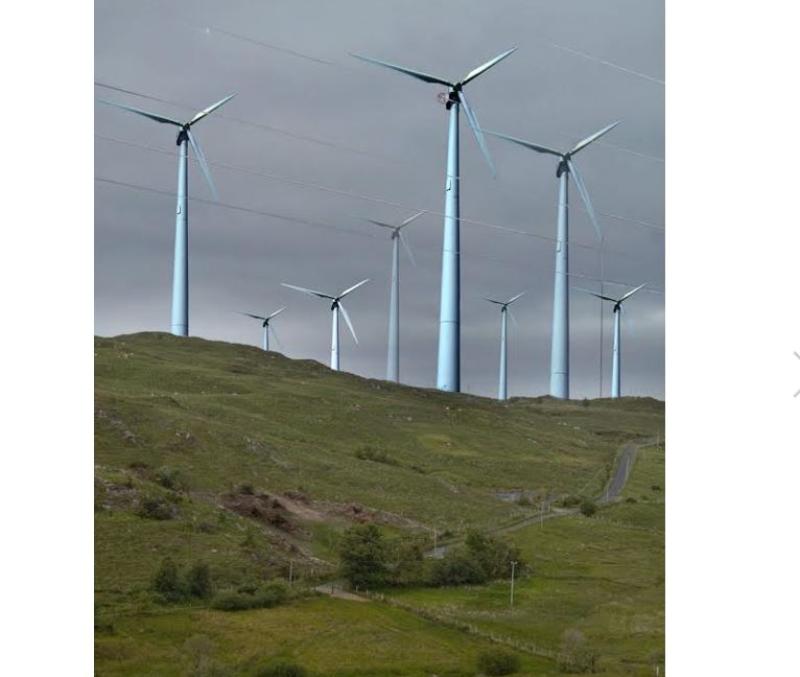 Controversy continues in the ongoing saga surrounding the proposed development of an eight-turbine wind farm at Graffy outside Glenties.

A company called Cuilfeach Teoranta is applying for a ten-year planning permission for this area.

Many people living in the area dubbed Donegal's last great wilderness, are unhappy with the proposals and are annoyed at the manner in which the developers appear to be submitting the application and it is is making matters unclear and confusing for the local community.

Following on from last week when the Donegal Democrat highlighted the submission of a new application being made for the wind farm, it appears the controversy around this application shows no sign of abating.

Cuilfeach, with a Dublin office address, and directors Natasha Rodgers, Michael Rouse and Seamus Mac Rory are the company proposing to build the wind farm with the professional assistance of Harley Planning Consultants. Jim Harley who signed off on numerous applications associated with this wind farm was a former senior planner at Donegal County Council (DCC).

Earlier this summer Harley Planning made an application to Donegal County Council for an eight-turbine wind farm across a selection of townlands at Graffy.

This was vigorously opposed by the local Graffy Environmental Group (GEG) and others including several walking and hiking interest groups, and more particularly by the Department of Arts, Heritage and the Gaeltacht (DAHG) highlighting environmental impacts on many Annex 1 species including the golden eagle and the fresh water pearl mussel.

A GEG spokesperson, summarized the chain of events saying the June application received 36 observations and letters of concerns from numerous professional bodies and government departments.

"Mr Harley then requested an extension of time for DCC to make a decision and was immediately granted a one-month extension by the planning office in Lifford. However, within a week of the extension being granted, he withdrew the application altogether – as reported in the Donegal Democrat on September 9.

The spokesperson added that an examination of the file notes that council did indeed invalidate 2151978 on October 7 for site notice errors and with specific instruction to the applicant that the file was being returned together with a fee submitted of €4,700.

The planning department went on to state that: “If you wish to pursue this proposal it will be necessary for you to submit a new application. The details on the application form must be updated to take account of the fact that any re submission will be treated as a completely new application”

At odds with council

It is on this pivotal point that GEG is at odds with Donegal County Council.

Their spokesperson explains: “Mr Harley had an application submitted on the 6th and invalidated on the 7th and we find it more than curious that as council asked for, a ‘completely new application’, 2151990, appeared on the council planning website on the 7th. On the very same day that post was being dispatched to the applicant and his cheque returned. At least that is what the official documentation detailing the invalidation of the application received on the 6th tells us.
"Hence, a week or so later when council put up the so called ‘new application’ we were deeply disturbed to find it was the exact same application as before and evidently never left the council offices. The documents online are clearly date stamped as having being received both on October 6 and 7.

"The file online is a mess of double stamps and or of amended dates and new initials. Clearly, it is not a new application as was required following the notice of invalidation. Moreover, the new site notice still does not conform to the strict requirements laid out by council to the applicant and that has been brought to the attention of council by one of our members.

"Council are obligated to invalidate this application forthwith for it is entirely unfair to let the public blindly submit observations on an application that ultimately can but be found invalid per the council’s own instructions.”

An examination of an objection received by council for the new application 2151990 makes for stark reading. It is available online and asks:

A copy of the site notice is attached to the objection and it does indeed show the same date. It is apparent that huge question marks hang over this application, said the spokesperson and added that the GEG concerns must be addressed.

A series of detailed questions were submitted to Council as follows and we append answers received in so far as fit.

Q1: Was 2151978 invalidated on October 7 and application plus cheque for €4,700 returned to the applicant?
A: Planning application 21/51978 was received by the planning authority on the 6th October and was deemed invalid due to deficiencies within the site notice and the corresponding newspaper notice.

Q2. Was, as council requested in the invalidation order, an entirely new application received for this project?

The council reply did not answer directly but the next question relates to the same situation.

Q3. I note a new application online, 2151990, which appears to be 2151978 re-stamped and re-dated. Can this anomaly be explained?
A: The invalid application was amended by the applicant’s agent through the inclusion of an amended site notice and the entire set of application documents was resubmitted on 7th October by the agent. Documentation was re-stamped as being received on the 7th October and the older dates were scored out and initialed.

Q4: I note a scanned objection on file for 2151990 with a copy of the new site notice as required by council for any new application following the invalidation of 2151978. Can you explain why this site notice carries the same date as the notice for 2151978?
The council did not answer this

Q5: I note the objection online compares the new site notice with the newspaper notice of the 28 September for the development as published in this paper. It clearly identifies significant differences between both texts and points out the direct non-compliance with your specific instructions in the invalidation checklist that the site notice and newspaper notice must correlate; that "Please make sure the newspaper and site notice directly correspond correctly across with each other when resubmitting the application."
A: The valid submission made by a member of the public (18/10/2021) and any planning issues raised by that submission (or any other submissions made before 10/11/2021) will form part of the formal assessment of the application and will be reflected in a planning report as part of the determination of the application.

Q6: I note the objector’s point that it appears the public may be allowed, at unreasonable expense, to submit objections on an invalid application whereas a timely invalidation of the application would avoid that.
A: The requirement that all submissions are accompanied by the requisite fee is a stipulation of the Planning and Development Regulations 2001 (as amended), is set nationally and is not a matter governed by the planning authority.”

Locals say they will continue to scrutinise the development proposal over the coming days.