Top prize of a tractor on offer in annual charity draw 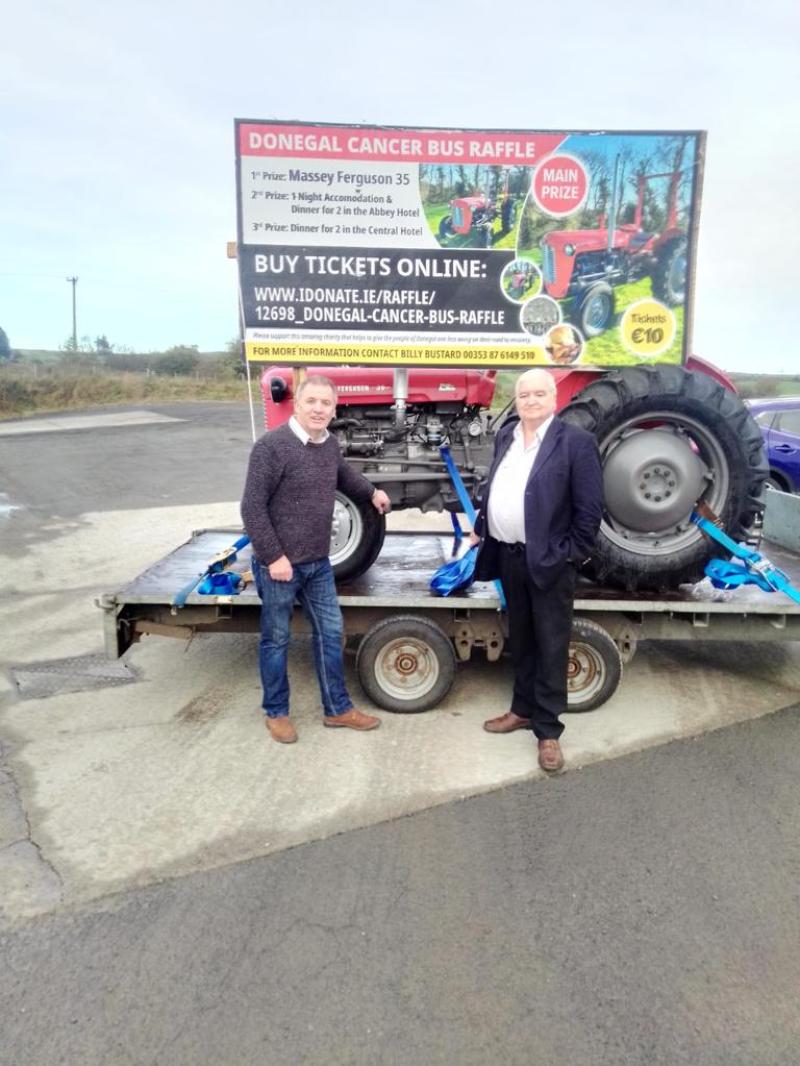 Johnny Haughey and Billy Bustard pictured with the restored Massey Ferguson tractor, the top prize in a draw that will take place at the charity dance in Donegal Town

A charity dance and prize draw is set to raise vital funding for a cancer service while also providing the opportunity for a patron to become the proud owner of a refurbished Massey Ferguson tractor!
The draw and dance, organised on an annual basis by Johnny Haughey and Billy Bustard, will take place in the Abbey Hotel in Donegal Town on Friday 19 with a galaxy of star names, local and national, providing the entertainment on the night.
They include John Hogan, Evelyn Gallagher, Hilary Ann Hetherington, yoddler Cathal Gallagher, and Ciaran McAlree.
M.C. for the occasion is Johnny Haughey who will also be performing while Fergus Cleary will also to take to the stage. All of the artists are giving their services free of charge.
Those are the two-legged entertainers – the four wheeled attraction will, of course, be the Massey Ferguson 35!
“I decided to buy this old tractor which was built in 1962 and then thought I would refurbish it. It took me about six months to do it up with the help of others.
“There was a lot of work involved including rebuilding the engine and a lot of parts needed including a new battery, tyres, rims, starter and injector pump.
“Not as much overhauling as me!,” laughs Billy who for a number of years skippered the Donegal Bay Waterbus.
It had been hoped that the newly refurbished three cylinder Massey Ferguson would be the star attraction in the middle of the Abbey ballroom on the night of the dance but unfortunately this cannot now be achieved.
But it will be parked in the vicinity of the hotel for all to admire and hope they have the winning ticket!
In an effort to promote the draw and the dance, the tractor has been transported to various parts of the county over the past few months including Letterkenny, Donegal Town, Dunfanaghy, Ardara, Killybegs, Falcarragh, Newtowncunningham, and Bundoran.
Meanwhile, second prize in the draw is one night accommodation and dinner in the Abbey Hotel while the third prize is a dinner in the adjacent Central Hotel.
On the dance itself, Letterkenny man Johnny declares: “It has raised a lot of money, well over €100,000, since we organised the first one ten years ago and the tickets for this one have been selling well.”
The joint organisers have both come through cancer journeys themselves and are all too aware of the sufferings associated with the illness.
Two years ago, Johnny was diagnosed with stomach cancer and had his stomach removed during a seven hour operation. Billy has also been through the wars as a result of prostate cancer and open heart surgery.
All of the funds from the dance and draw are going directly to the Good and New Cancer Charity. The Donegal Cancer Bus, which has been providing a service to Galway for those availing of cancer treatment, has been running for close to twelve years.
Tickets for the draw cost 10 euro and can be purchased online through: www.idonate.ie.
Doors open at 9pm on the night.