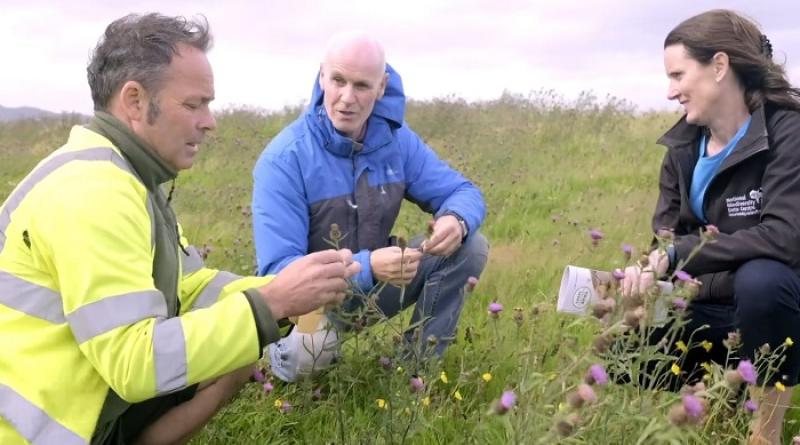 Measures that the Buncrana Tidy Towns Initiative has implemented include managing public spaces in a pollinator-friendly way; enhancing natural flora; creating wildflower meadows; surveying flora and fauna; creating a community orchard and natural corridors for pollinators; protecting and planting native hedgerows; reducing mowing to allow wildflowers to grow; making and erecting bee hotels; and reducing and eliminating the use of pesticides and herbicides.

The group have also undertaken projects and workshops to raise awareness of our biodiversity and of the importance of pollinators by working with a variety of stakeholders including members of the local community, Donegal County Council, Wild Inishowen and the National Biodiversity Data Centre.

The focus of the award is on biodiversity and the crucial role that the declining population of Irish bees play in the pollination of our plants, trees and vegetables.  The award encourages local groups to implement pollinator-friendly actions in their towns and villages.

The award contributes to the achievement of the All-Ireland Pollinator Plan.”Buncrana Tidy Towns collected the €1,000 national prize and a €1,000 regional prize.  Other regional award winners included Abbeyleix, Co. Laois; Castlegregory, Co. Kerry; Leighlinbridge, Co. Carlow; Belmullet, Co. Mayo; Dundalk, Co. Louth; Ennis, Co. Clare and Clonmel, Co. Tipperary.  For more information on the All-Ireland Pollinator Plan and what you and your community can do to support bees and other pollinators, visit www.pollinators.ie

George McDermott and Karl King from the Buncrana Tidy Towns Initiative discuss some of the pollinator-friendly measures the group has put in place in Buncrana with Dr. Úna FitzPatrick from the National Biodiversity Data Centre.  Buncrana won the National ‘Tidy Towns’ Pollinator Award for the second year in a row.