Cameron a worthy winner of Young Environmentalist of the Year award 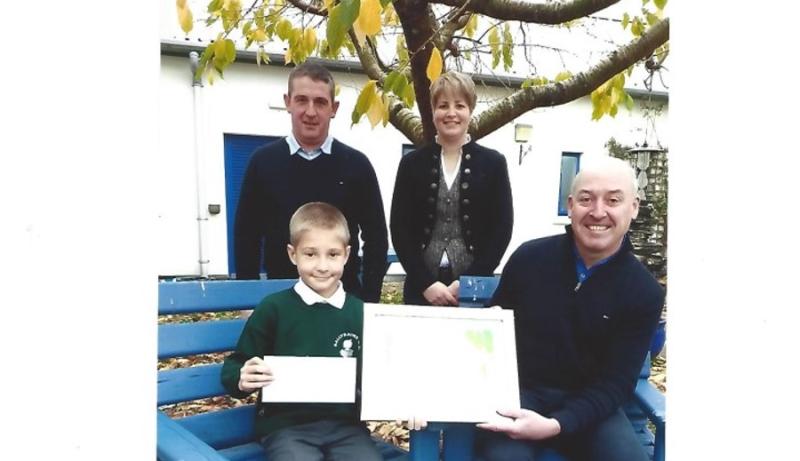 Cameron White, a  5th Class pupil in Ballyraine National School, Letterkenny got a special surprise this week when Gerard McCormick of Letterkenny Tidy Towns announced that Cameron had been awarded ‘Young Environmentalist of the Year’ in the Letterkenny Cleaner Community Awards 2021.

Although the official award ceremony could not take place this year the presentation was made to Cameron at the school this week.

In a socially distanced ceremony in the school courtyard Mr McCormick outlined the reasons why Cameron had been selected as this year’s winner. Cameron’s proud parents Robert and Vienna White also attended the presentation.

From a very early age Cameron has displayed a great interest in and knowledge of nature and wildlife.  It was a huge learning experience for him and he was amazed by how much he could learn, by just standing back and watching birds and wildlife animals live in the natural habitat.

Cameron’s love of nature stems from when he was 5 years old, where he discovered a deer antler and many different wildlife footprints, while out walking on his family’s farm in New Mills.  From that day he has always loved to explore birds, wildlife and in particular, foxes.

When the opportunity came up during lockdown to complete a nature project, Cameron jumped at the chance to really explore deeper, this time with his motion camera, to show his school how he helped build bird boxes and capture badgers and foxes living so close in the fields beside his home in Roughan, New Mills.

Cameron loves any opportunity he gets to share his love of nature with other pupils in the school.  He brought in his pet lamb Timmy to school and gave a talk to Junior Infants about caring for the lamb.

He also brought in a box of 250 delicious apples from his orchard at home to share with teachers and pupils. He was very involved in the school’s poly tunnel project and was always on hand to share his latest gardening tips and skills.

He got a greenhouse for his 6th birthday and he loves to experiment with growing new fruit and vegetables including purple cabbage and pumpkins. He loves working on the family farm looking after the Texel and Suffolk sheep. He is looking forward to planting some native Irish trees on the farm this year.

He has been an active and valued member of the school’s Green Team for the past three years and he made a significant contribution to the ‘Global Citizenship and Travel’ theme.

He has also developed a strong interest in conservation issues and he particularly enjoyed taking a lead role in a number of campaigns including the ‘LOVE 30’ and ‘No Idling’ Campaign as part of the Travel theme.

Cameron said he was so proud and happy to get this award. He lists climate change and the need to reduce our dependency on fossil fuels as his major environmental concern.

He is also concerned about litter prevention in Letterkenny. Above all, he enjoys being outdoors and away from TV and screens. This young environmentalist hopes to be a vet or a farmer when his finishes his education.

Speaking at this week’s ceremony school principal David Oliver said he was delighted with the news of Cameron’s success:

"Cameron has been a wonderful wildlife ambassador for his school and we have benefited so much from his natural enthusiasm for caring for the environment.

"It has been a real privilege to nominate Cameron for this year’s ‘Young Environmentalist of the Year’ and he a very worthy winner ."