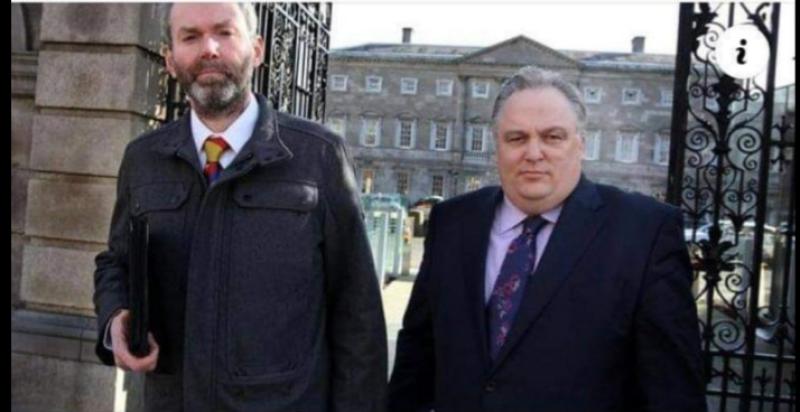 Cllr Frank McBrearty (right) leaving Dáil Éireann with former Garda John Wilson, who, along with Sgt Maurice McCabe, he had helped that day.

A Donegal Councillor has vowed to defend the good name of his family and himself, following an article in a national newspaper claiming he had been been reported to the Standards In Public Office commission.

Speaking to Donegal Live, Cllr Frank McBrearty (Independent) said he had instructed his legal team to take proceedings against the newspaper and all of the people named in today's (December 12, 2021) article.

He added: “I will defend the good name of my family and myself, which I have built up over the past 25 years, after I was accused of a murder that did not happen.

“At that time, my name was completely cleared and I will fight tooth and nail to ensure that my family's good name, my good name and my reputation as a public representative is upheld by that newspaper and by the people named in the article.”

The paper in question alleged Cllr McBrearty had been accused of sending “abusive” messages to politicians and mica campaigners.

It also said some mica campaigners had outlined their claims to Donegal County Council and SIPO commission. The campaigners are alleging Cllr McBrearty has not shown “integrity, impartiality and respect”.

“His role is not to use Section 31 style censorship on a member of a democratically elected Council to silence me in trying to expose systemic corruption in local government, assisted by the political establishment.

“I have written to the Chairman, Jack Murray, and the Chief Executive, John McLaughlin, today, demanding a full apology and an explanation regarding what is contained in today's Sunday Independent.

“My full legal team have been made aware of this and it is my intention is to seek redress in the High Court if an apology is not forthcoming at tomorrow's Donegal County Council plenary meeting, from both the Council and Chairman, Jack Murray. All the people named in the article will be added to proceedings against the Sunday Independent,” said Cllr McBrearty.

In a copy of email correspondence to Cathaoirleach of Donegal County Council, Jack Murray, seen by Donegal Live, Cllr McBrearty said: “I am demanding a full explanation on your unfounded false allegations against me in the Sunday Independent written by Mr Rodney Edwards.

“I am also demanding an unreserved full apology from you and for that apology to include my family, which you all have caused great distress, anxiety and hurt to.

“You personally, aided by Cllr Martin Harley, assisted by Mr Rodney Edwards and his newspaper, have single handily assassinated my character, my standing in my community as a Public Representative and blackened my good name. Furthermore, you all have articulated that I'm some kind of danger to members, staff and home owners which are similar to the false accusations and false allegations made against me by An Garda Síochána 25 years ago, when I was unlawfully arrested for a crime that did not happen have to do with.

“Finally, I am requesting copies of alleged complaints made against me, which are referred to in this article. I look forward to your response and an apology.”