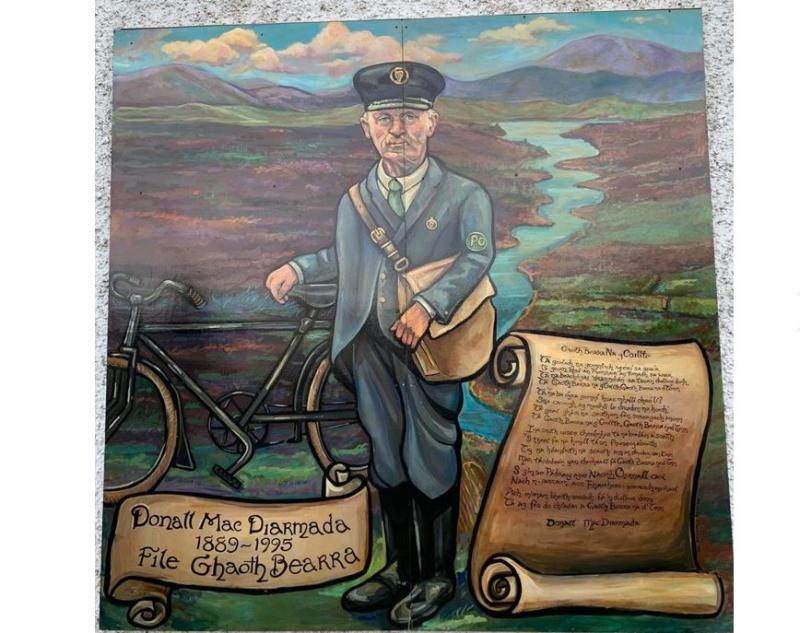 Villages across rural Donegal face rapidly changing economic circumstances and many are turning to a variety of strategies, including tourism, to provide stability in their communities.

Perhaps one of the best examples of this brand of community economic development is the more holistic approach and community participation in the tiny west Donegal village of Doochary.

The local development group has chosen to develop their tourism potential through the use of murals and with the various themes that can be explored, they look to be on to a winner. They hope it will draw people into the community and distinguish their place as a unique destination by generally following a heritage-based theme.

Doochary Development has just been approved funding for their recent projects of erecting murals on derelict buildings or places that are appropriate for a mural.

Murals have the opportunity to tell the community a story. These stories can be brought to life by being fantastically illustrated on a mural.

They are very fortunate in the Doochary Development committee to have Dr Andrea Redmond, a highly respected artist in their ranks. Her paintings and sculptures include Irish nature flora and women’s spirituality.

Her work has been exhibited in Ireland, Canada, and United States! Andrea resides here in Commeen, Doochary where she operates her art studio/workshop Cailleach moon cottage

The first completed mural by Andrea is of File Gaoth Barra and postman, Donal Mac Diarmada. You can see it on the gable of a little old cottage, where Donal was born. The cottage is situated between Doochary village and St Conal's Church on the Leitirmacaward and it's hard to miss. In fact, it is that close to the village that the mural can actually be seen from the village itself!
Donal was a postman for 58 years and was the longest-serving postman in Ireland when he retired in 1964.

He joined the postal service as a relief worker on his 17th birthday and reported to have never missed one day off work. A native Irish speaker, he always proudly wore his Fáinne on his coat.

Donal was born on June 30, 1889, and started working in Doochary Post Office on June 30, 1906 under the British regime as a temporary postman on a walking post. His starting pay was 8 shillings a week. He retired from the postal service on June 29, 1964 age 75.

Donal was raised in Doochary but moved to Commeen during his married life. He and his wife, Rose (née McGeehan) from Derrylaconnell had a lovely neat cottage there with a beautiful garden at the front.

The cottage still remains in Comeen, still as beautiful.

Well done to the creative folk in Doochary for not only keeping the memory of Donal alive but looking at creating a new attraction for their area. There are two more to follow, wonder who or what they will feature?