€8m school opens after being in the pipeline for decades 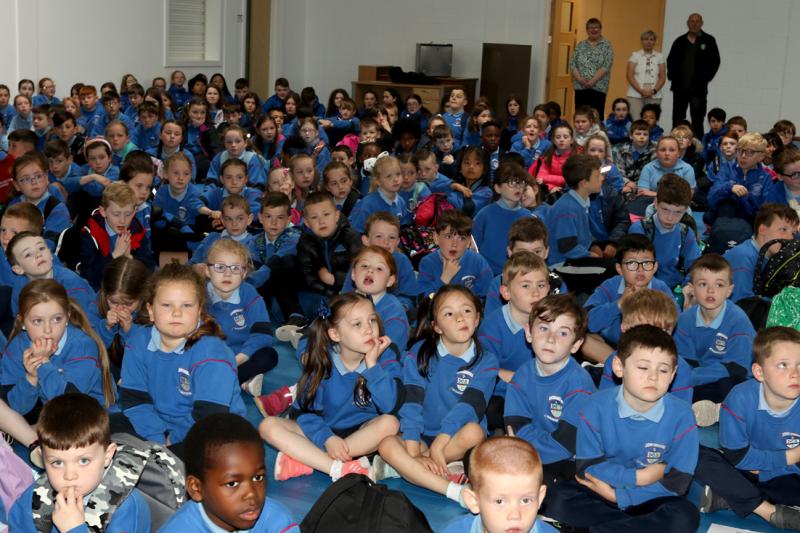 It was certainly a long time coming, but pupils and staff of St Mary’s NS, Stranorlar finally made the big move to their wonderful new school.

The 24-classroom school is located on a 2.2 acre site opposite the Finn Valley Centre in Stranorlar. The €8m project came about after many years of proverbial blood, sweat and tears from staff, Board of Management and local representatives.

Almost two years after construction got underway, moving day finally arrived on Wednesday, June 22. The school community of 458 pupils and 40 staff including mainstream teachers, special education teachers, special needs assistants, a school assistant, secretary and caretaker, started their day in the old school beside the church. Together, they walked to the new building, joined by many past pupils and staff along the way.

Cathaoirleach of the Municipal District (MD) of Lifford Stranorlar, Cllr Patrick McGowan (FF), is himself a past pupil. Like the many other past pupils, he found it very moving.

Speaking on Wednesday, he told the Donegal Democrat: “The emotion today, you could have touched it.

“It was a long road getting here but today was about watching the children walk from the old school over to the new one. Parents and grandparents and so many past pupils lined the route. It was very highly charged and emotional.

“I was talking to Conal Gallen and I know he won’t mind me saying, he said he was shaking.

“There was so much emotion and there were so many smiles that they would have stretched to Donegal Town and back.”

The day was all the more special given that there were many times along the way when the challenges seemed insurmountable.

“The school had to be in Stranorlar because there is already one in Ballybofey,” said Cllr McGowan.

“We have three national routes coming into Stranorlar, so that ruled out a lot of places.

“Mary Coughlan signed off on the need for the school when she was minister. Joe McHugh and Charlie McConalogue have all worked at it too, trying to make it happen.

“The councillors, the Board of Management, the various ministers, the Department, we all worked together.

“It really seemed at times as if it wasn’t going to happen but we finally got the site and now we have the school and it is just fantastic.

“The staff and the pupils, they really deserved it and today they got it.”

Cllr McGowan recalled his own schooldays, sitting at small wooden desks with inkwells.

“And we had so many students and teachers in prefabs.

“This new school is just fantastic. Everything is so big and bright and cheerful and it is all purpose built. It would take your breath away, inside and out, from the equipment to the big bus bays. It made me think of LYIT when I first had a look around it on the day construction finished.”

Cllr McGowan said there was one particular moment during Wednesday’s big move that really made him smile.

“I was standing on the road between the swimming pool and the new school,” he said.

“These were two big projects for Ballybofey and Stranorlar that felt at times as if they might never happen.

“It was really special to be standing there with one of them behind me and the other in front of me.

“I hope that in time, they will be able to use each other’s facilities.”