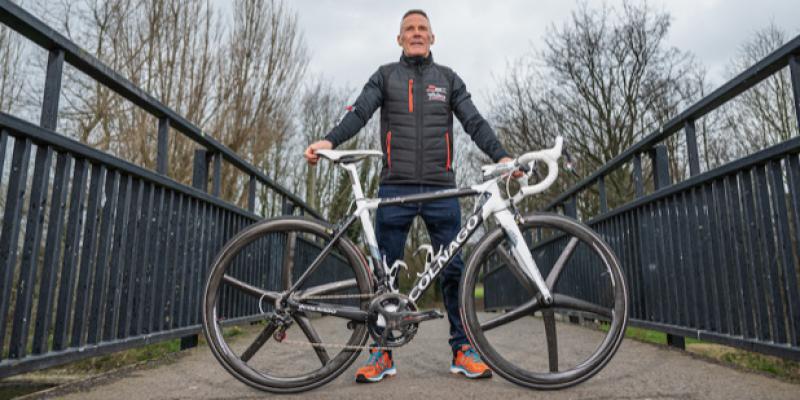 Joe Barr is to attempt his most ambitious challenge yet

Donegal elite cyclist Joe Barr is to attempt to beat the Guinness World record for the furthest distance cycled in seven days.

The Newtowncunnigham man’s efforts are in support of Cancer Fund for Children and their plans for a new therapeutic short break centre, Daisy Lodge, in Cong, Co Mayo.

The 62-year-old is taking on the challenge, which begins this Sunday, to beat the record cycle of 3,580 km in 168 hours, or seven days, as a tribute to his 15-year-old son Ross, who was diagnosed with brain cancer in 2007.

Joe will attempt to surpass the record on a route from Malin Head to Mizen Head seven times. The challenge was set to take place last April but had to be postponed due to dangerous weather conditions.
Joe has had a professional cycling career of more than 45 years and is attempting to beat the Guinness World record held by Scottish cyclist Josh Quigley.
He retired from professional cycling in 2004 but got back on the bike in 2009 to fundraise for Ross. He has competed In numerous endurance races around the world including the 3,000+ mile Race Across America. He has won the 1,500 mile Race Around Ireland twice and holds multiple endurance World Records in Ireland. This seven-day highest mileage Guinness World Record will be his most ambitious record attempt using the very challenging route of Malin Head to Mizen Head.
He has completed the 2000+km non-stop Race Around Ireland and, prior to that, collected hundreds of medals and trophies over the years including a medal at the 1986 Commonwealth Games.

Group expresses their gratitude for a wonderful tour of Arranmore Island

Whilst Joe always had a passion for cycling his motivation to compete in his first endurance cycling race in 2009 was in honour of Ross and to raise funds for Daisy Lodge. Ross was diagnosed at just five months old with a malignant brain tumour, endured numerous rounds of treatment and is thriving at 15 years old.
In the early years of Ross’s cancer diagnosis, the family were invited to Cancer Fund For Children’s short break centre in Newcastle, Do Down for some much-needed respite from the constant hospital appointments, tests and treatments and all that goes with a cancer diagnosis in the family.
Daisy Lodge, Mayo will be a therapeutic short breaks facility to provide respite for children with a cancer diagnosis and their families and it is due to be built on the shores of Lough Corrib near the village of Cong.
“Every family in Ireland with a cancer diagnosis should have the opportunity to experience Daisy Lodge, It’s a fantastic place,” Joe said.
“Whenever you go down there, they just do everything for you, so effectively it's a home from home and it allowed us to be together as a ‘normal’ family again and that’s why I’m so motivated to raise as many funds as I can to support the new Daisy Lodge.”