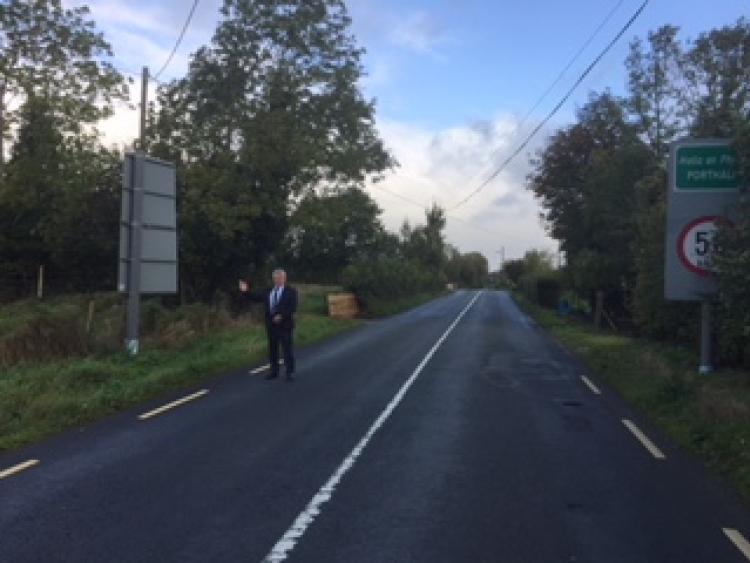 Cllr Crawford on the road where locals are asking drivers to slow down.

Up to 30 local residents stood along the footpath of an east Donegal road at Porthall this morning to call attention to what they said were speeding problems on the busy road.

Adults and children were calling attention this morning, Monday, to speeds on the Lifford to Derry road, which passes through St. Johnston, Carrigans and Porthall. They also pointed out a road sign on the road that has been turned to face away from approaching traffic.

“This particular road is a very busy road, and it carries an awful lot of cross-border traffic early in the morning and later in the evening, as well as local traffic,” local Fianna Fáil Cllr. Gerry Crawford said. Cllr. Crawford took part in the action this morning with local residents.

The councillor said residents have been alarmed for a long time over the speed of some motorists along the road, saying children get the bus on the road there for primary and secondary schools.

There have been a number of road traffic incidents along the full length of the road in recent months, Cllr. Crawford said.

“What we’re doing today is asking drivers to be more aware of the dangers of speeding on this particular road,” he said. The speed limit varies from 50 kph through villages to 80 kph outside of those areas.

Cllr. Crawford said he has also been in contact with the council’s road section, asking them to make sure local road signs and speed restriction signs are visible. He pointed to one sign that has been turned to face the wrong direction for what he said was a long period of time.

“While I acknowledge the very good work that is being done by the Road Safety people, it must be alarming for them when another branch of Donegal County Council fails to carry out the necessary work to aid road safety,” he said.

Cllr. Crawford said the people who took part in this morning’s action are asking “everyone concerned who uses the road to please slow down and pay attention to children and other pedestrians, and for the council to do the simplest of things and make the warning signs they erected visible to the driving public”.