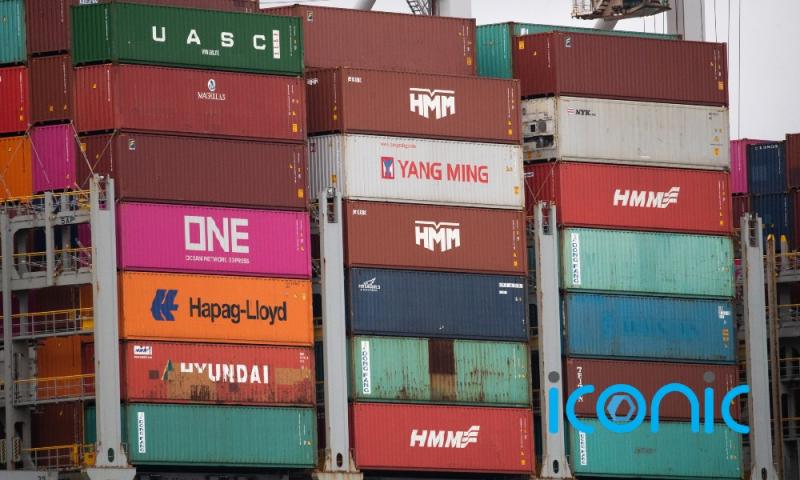 Goods imports from Britain have dropped by more than a fifth since Brexit, figures show.

The latest numbers from the Central Statistics Office (CSO) show that the value of goods imports from Britain fell by almost €3.3 billion (£2.75 billion) from January to November in 2021.

Exports to Britain accounted for 11% of total exports in November 2021.

Imports from Britain were 16% of the value of total imports in November 2021.

The drop in imports comes as cross-border trade continues to rise.

Imports from Northern Ireland to the Republic jumped by more than 64%, while exports to north of the border also rose by more than 50%.

The figures come amid ongoing negotiations between the UK Government and the European Union over the future of the Northern Ireland Protocol.

Unionists argue that the post-Brexit trade arrangements damage the union between Northern Ireland and Great Britain by placing a border in the Irish Sea.

Those trade arrangements have created economic barriers on the movement of goods between Great Britain and Northern Ireland, with the aim being to avoid the creation of a hard border on the island of Ireland.

It has achieved that by effectively keeping Northern Ireland within the EU’s single market for goods, an arrangement which has led to the checks on products crossing the Irish Sea from Britain.

Jarlath O’Keefe, from Grant Thornton Ireland, said: “The CSO figures for November confirmed that there has been a significant increase in cross border trade on the island of Ireland in 2021 following Brexit.

“This is due in part to businesses adjusting their supply chains to avoid the administrative burden associated with importing goods from Britain.

Meanwhile, the value of goods exports for the period January to November 2021 was €151.7 billion (£126.7 billion), an increase of more than one per cent compared to the previous year.

Exports of electrical machinery, appliances and parts was the main driver, while exports of organic chemicals increased by more than 16%.

Exports of food and live animals increased by more than 15%.

Exports of medical and pharmaceutical products decreased by one billion euro (£835 million).