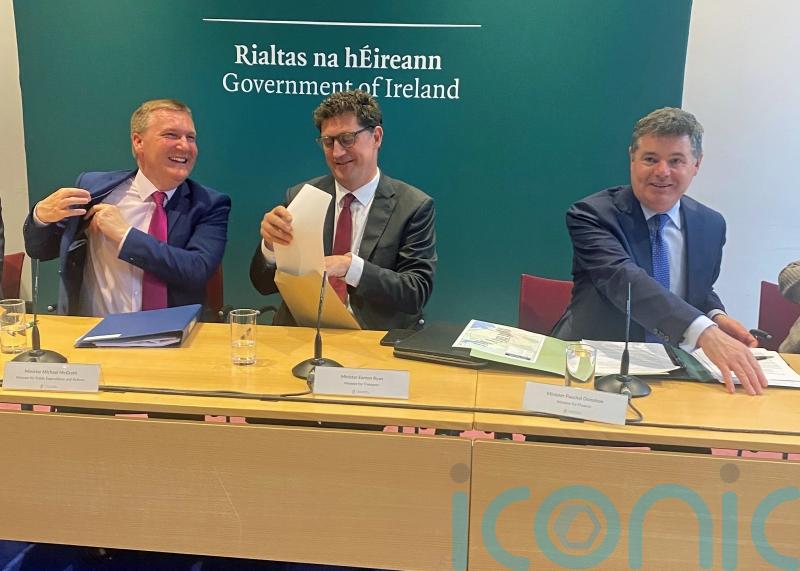 The ambitious plan to build Ireland’s first MetroLink will see trains running every three minutes at peak times, linking Swords to Dublin Airport and to the south of the city.

The planning application for the metro project will be made in September, with a target of having the transport infrastructure completed and open for use by the early 2030s.

Early cost estimates for the plan are in the region of 9.5 billion euro, with an extreme case of 23 billion euro.

However, Minister for Transport Eamon Ryan said an “abundance of caution” has been applied to the project costs, adding he is confident the project could be completed at the lower cost level of 7.1 billion euro.

Three-quarters of the cost during construction will be funded by the Exchequer, while the fourth quarter will be paid for by private sector partners.

A more exact cost will be known following planning permission and procurement process, the Department of Transport said.

MetroLink will consist of a fully segregated railway, most of which will be underground, running from north of Swords to Charlemont in the south of Dublin city centre.

The route will include 16 stations and serve residential communities such as Swords, Ballymun and Glasnevin, as well as the city centre, Dublin Airport, and major employment, education, transport and other centres.

When operations commence, there will be trains every three minutes during peak periods.

This could rise to a service every 90 seconds by 2060 with the system capable of carrying up to 20,000 passengers per hour in each direction.

It is estimated around 53 million trips will be taken each year, and will diverge around 360 million car trips off the road and on to public transport, and create one billion fully electrified carbon-neutral trips.

“It’s more likely now to the south-west than the south-east, up and down the green line, because this is a new type of system, it’s driverless, it’s super-fast, electric, it’s the modern metro system…” Mr Ryan added.

“But that’s for the future. First thing we have to do is build it, from north of Swords, north of the airport, to Charlemont and then further advance all the other transport projects.

“To make it work, the cost estimates we’ve done are in my mind the most conservative.

“We have been excessively cautious and conservative on cost estimates to make sure we don’t see the likes of what happened to Children’s Hospital, and we’ve counted in every contingency and provided for it.”

Minister for Public Expenditure Michael McGrath described it as the “greenest” public capital investment plan in the history of the country.

He said it will reduce greenhouse gas emissions and provide a greater integration of transport.

“Major projects of this nature require clear oversight and scrutiny to ensure that they don’t deliver projects that no longer represent value for money for the taxpayer,” Mr McGrath said.

“In the context, the capital investment project appraisal and design process has been reformed. There is no longer this big-bang approach to proceeding with projects based on one-point-in-time assessment, but rather there are now a number of decision gates, which allow us to pause and re-evaluate the proposal if necessary.

“Further to this, the MetroLink preliminary business case has been reviewed by the major projects advisory group process established earlier this year.

“This independently chaired group of project delivery experts provide advice and recommendations to project sponsors in advance of the decision to proceed to government.”

Minister for Finance Paschal Donohoe said the project will deliver “huge benefits” to the city.

“This is a project that is about the delivery initially of 15 public transport stations, putting in place a capacity to deliver 20,000 public transport journeys per hour,” Mr Donohoe added.

Around 2,700 jobs will be indirect supporting jobs that will arise throughout the process.

Peter Walsh, chief executive of Transport Infrastructure Ireland (TII), said the project could come up against some complications, saying that tunnelling is “risky”.

“You can do a certain amount of ground investigation and anticipation to predict what materials we are going to encounter and we have done, but I know from our experience with roads programmes you’re dealing with boreholes at maybe hundreds of meters apart and the ground conditions could be very different, in which case you may have difficulty in dealing with that,” he added.

A metro for Dublin has been in development in various forms for more than two decades.

Ireland remains one of only a small number of countries in Europe without a metro in its biggest city or a rail connection to its main international airport.

The chief executive of the National Transport Authority, Anne Graham, said: “Today is an important day for Irish public transport.

“MetroLink is about providing a frequent, reliable, sustainable alternative as part of an integrated system, so that we can encourage more people to get out of their cars and on to public transport.”