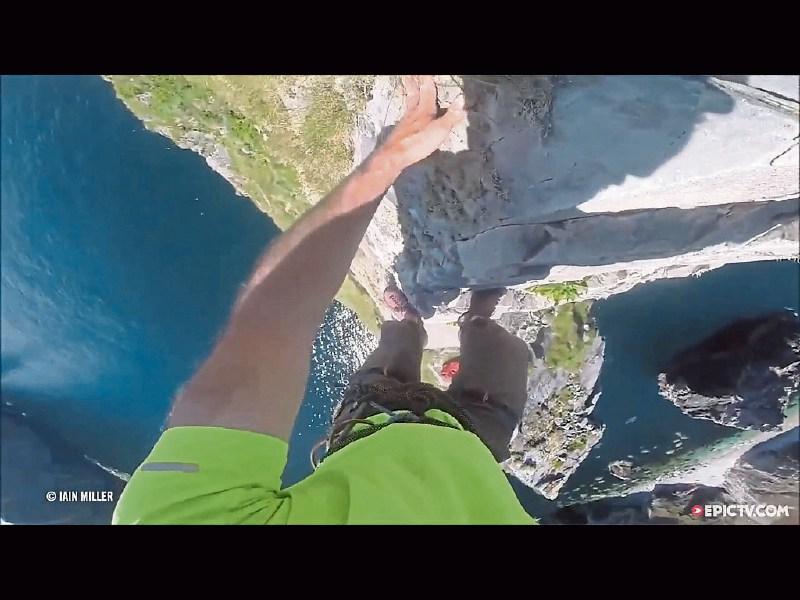 A west Donegal based climbing expert who has pioneered unique ascents on the magnificent sea stacks off the Donegal coast has won global recognition for his solo climbing exploits in 2015.

Climber and author Iain Miller who runs the Unique Ascent climbing company has been busy exploring the unique topography of Donegal since he moved the area from his native Orkney Island in Scotland.

Acclaimed adventure sports channel “Epic TV” document hundreds of dare devil climbs from all over the world each year and only those deemed worthy are listed in their annual top three climbs in each category.

Iain’s solitary climbs at remote locations such as the scenic Croc na Mara sea stack off the coast of Glencolmcille were deemed worthy of third spot on the best solo climbs in the world by the TV show judges.

Iain said he was delighted with the recognition especially when the broadcasters have a choice of thousands of climbs to chose from each year.

He stated: “It really did make me smile when I found this this morning. I’m twice the age of the other two. But more smile worthy is Epic TV have thousands of options for what to put in these annual videos and the old guy on the stack makes the cut.”

Iain explained that he undertakes solo climbs primarily out of the fact he finds it difficult to have regular climbing partners in the county and also the fact he has to often leave so early in the morning to conquer each new route as he has to be home in time to collect his children from school.

A pioneering climber on the famous “Old man of Hoy” stack in Orkney, he says the climbing in Donegal is world class and when he first saw the Croc Na Mara stack he assumed it had already been climbed before.

”Croc na Mara is a world class sea stack there is no doubt about it. The location, the climbing and all that sort of thing and it was only climbed in 2008. When I first seen it I thought it had been climbed lots of times and that is was a hidden secret in Ireland but when I realised it hadn’t been climbed, it was a bit like finding the Old Man of Hoy unclimbed,” he stated.

He has pioneered a unique set of skills and techniques to climb and teach others how to ascend such challenging climbs and uses a sea kayak to access the coast areas with his climbing equipment.

Iain also records his adventures to share with other online and his videos have drawn many thousands to see his amazing views of the Donegal coast. This latest recognition comes shortly after Iain launched a new book on rock climbing Donegal with was launched in December in Letterkenny.

The book features over a thousands climbs for every level from novice to advanced in the county ranging from Glencolmcille to Malin Head and was formally launched by the CEO of Mountaineering Ireland Ruairí Ó Conchúir.