More than 90 events have already been planned for communities and venues across Donegal in this commemoration year, and more events are to be added to the Donegal schedule. 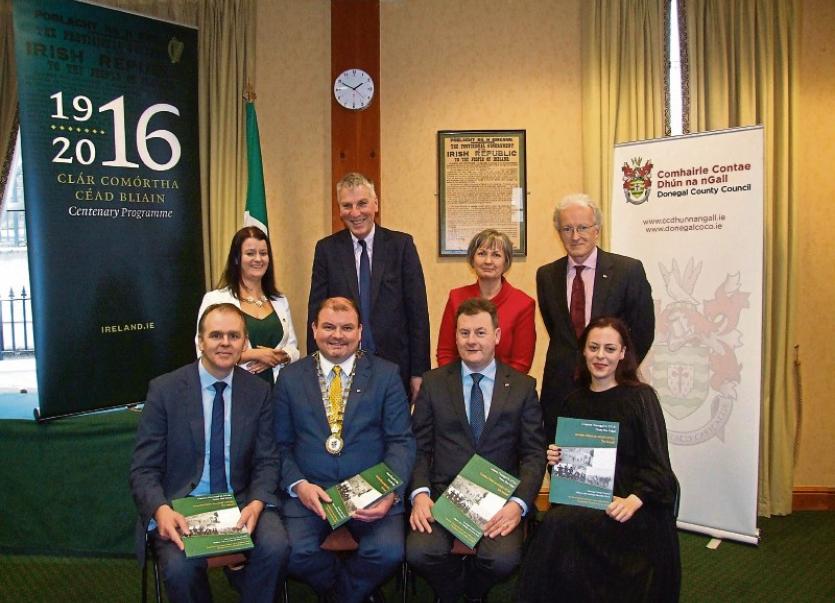 Donegal will mark the centenary of the 1916 Easter Rising with symposiums and workshops; drama, music and art; lectures, exhibits, memorials and festivals.

More than 90 events and activities have already been planned in conjunction with communities across the county for the coming year, and more events are expected to be added.

At the launch of the Donegal 2016 programme at County House in Lifford on Monday, speakers addressed the importance of remembering, reflecting and reimagining, as Donegal and the nation mark the centenary.

To coincide with the launch, Donegal County Council produced an education pack, “Donegal in 1916: From the Edge”, which was unveiled on Monday. (See story, below)

The 1916 centenary is “undoubtedly the centrepiece of the decade of celebrations,” Seamus Neely, county council chief executive, said.

Michael Starrett, chief executive of the Heritage Council, said there has been a shift in how heritage is viewed over time. In the past, he said, “it was thought of as looking after old things”. Today, he said, “It is much more about communities, people and place”.

He said, “The sense of public ownership of heritage has never been greater.”

Michael O’Reilly of Ireland 2016 said the programme will offer an opportunity to discuss “how we measure up in terms of the Proclamation” and called reimagining the future the important piece, asking, “What kind of society do we want?”

Joe McHugh, minister of state for the Gaeltacht, said the celebrations will also include a focus on language, noting that six of the seven Proclamation signatories were Conradh na Gaeilge members. “The people involved knew as part of independence was that freedom of expression,” he said.

Donegal County Council Cathaoirleach, Cllr. Ciaran Brogan, launched the programme, calling Ireland 2016, “an exciting time for us in Donegal and right across the island”.

Cllr. Marie Therese Gallagher, chairperson of the Ireland 2016 Donegal committee, credited the work of the council, the committee and the public, saying, “Without the communities in this county we would not be able to have such a comprehensive programme”.

The committee had €30,000 to distribute, which made for difficult decisions. More than 100 organisations are running Donegal events and she said the committee tried their best to ensure every part of the county could celebrate. She said another €30,000 was expected to be made available for community groups to apply again in the coming weeks.

Among the highlights are the February conference, “Remembering 1916: Ethical and Global Perspectives”, which includes a series of workshops in the run-up to the conference; the exhibit, “County Donegal in 1916: Our Story”, which opens in the Donegal County Museum in March; and a July Oideas Gael symposium with speakers on the subject, “The Irish Language Belongs to Everyone”.
The full programme of centenary events in Donegal and around the country is online at www.ireland.ie.