In 2013 Sally, a vibrant 36-year-old mother of three young children, gave birth to her fourth child in Sligo General Hospital. She died the next day from a severe but rarely fatal form of pre-eclampsia. 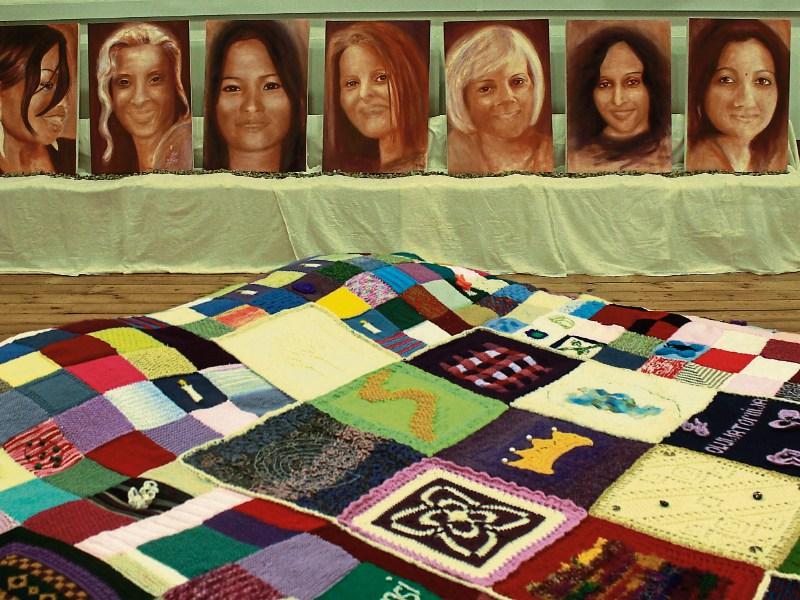 One evening last Spring Letterkenny resident Rosa Glacken got out her knitting needles and sat down to knit several brightly coloured four-inch squares that she then tucked into an envelope for posting the next day.

She was one of 150 knitters nationwide who responded to a request by a group called The Elephant Collective for contributions to a quilt commemorating women who’ve died in Irish maternity services.

The quilt has now been assembled and is headed to Donegal as part of a multi-media exhibition entitled “Picking Up the Threads: Remembering Women’s Deaths, Remaking the Fabric of Care” at the Regional Cultural Centre in Letterkenny.

The exhibition, which has been organised locally by Roisin Kavanagh of Donegal Women’s Centre, will be launched at 3 p.m. on Friday, 4th March, and remain on display through Saturday, 12th March.

The launch will include the premiere screening of a documentary about the making of the quilt, which features panels honouring eight women whose deaths in Irish maternity services since 2007 resulted in inquests which returned verdicts of “death by medical misadventure”.

It was particularly the case of one of these women, Sally Rowlette, that moved Rosa to contribute to the quilt.

In 2013 Sally, a vibrant 36-year-old mother of three young children, gave birth to her fourth child in Sligo General Hospital. She died the next day from a severe but rarely fatal form of pre-eclampsia that had also caused the death of Dhara Kivlehan after she’d given birth at the hospital in 2010.

“The image of that poor man suddenly looking after four children, I thought it was tragic,” Rosa said of the sympathy she’d felt for Sally’s husband, Sean, at the time.

Today Sean, Dhara’s husband Michael, and other widowers of the eight women are campaigning for an automatic inquest to be conducted any time a woman dies in an Irish maternity service. Some of the men will be participating in a Q&A session during the exhibition launch.

“Michael had been fighting for an inquest before my Sally died,” Sean said. “If his wife’s inquest had been done, they would have learned the lesson and my wife wouldn’t have died. Sally died of the exact same thing as Michael’s wife. Nothing had changed. That’s the reason we need this automatic inquest. I had to fight for a year and a half to get one for Sally. I came home with a baby in my arms and three children aged 7, 5, and 2. I had to deal with caring for the children and fighting for an inquest. People shouldn’t have to fight. The sooner these problems are dealt with, the sooner the lessons are learned. This thing of not telling you what’s going on, not giving a direct answer is not on. They have to be upfront and tell people exactly what’s going on.”

Speakers at the launch will include Jo Murphy-Lawless, a sociologist at the Trinity College School of Nursing and Midwifery who belongs to The Elephant Collective, which is working to improve Irish maternity services.

“We cannot rely on confidential enquires because hospitals and the HSE hide behind these enquiries,” Jo said. “We need public inquests for the families involved in these terrible tragedies and to enforce genuine accountability by the HSE. We need the HSE and hospitals to be held accountable for rectifying the failures of care that have been revealed in the course of these eight inquests.”

Go Active member Margaret Crossan’s daughter Louise knitted squares with the group and also embroidered a beautiful tree with the names of the eight women stitched at the ends of its branches.

“The tree is in remembrance of the husbands and the children involved,” Louise said. “Its branches of life show that even though the women are gone, their children are still here.”