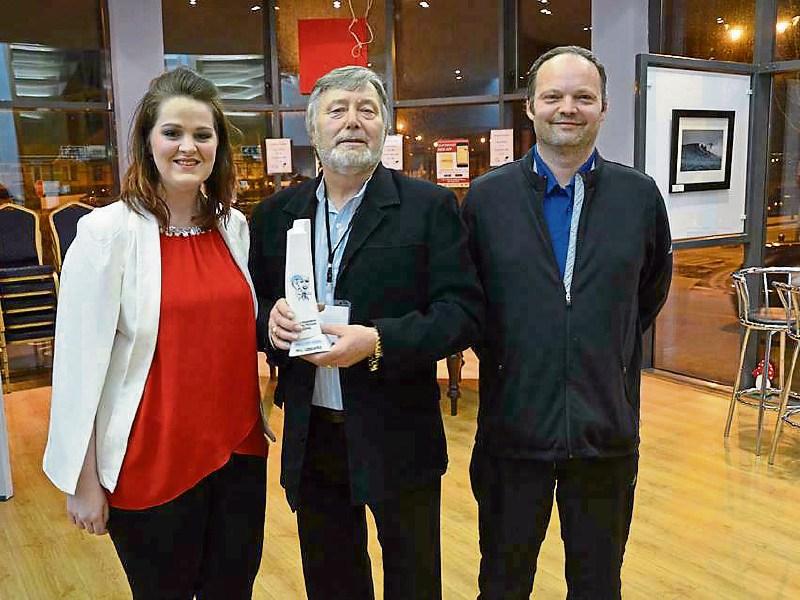 On the second night of the 64th Ballyshannon Amateur Drama Festival, Bill Greaves was honoured by Ballyshannon Drama Society for his involvement as an actor and director in numerous plays since he arrived in the town almost 20 years ago.

Committee member Michael Daly who led the presentation ceremony, said Bill was a: “A writer of plays, poems and stories, a singer, a musician, a teller of awful jokes, an actor, a director, a wonderful person to do the job no one else will want to do, he is to his bones decent and kind. He is a caring and brilliant neighbour who cares, in a quiet way, for those about him.

“He is a Renaissance man - with a huge interest in the arts, culture, music, drama.”

Bill’s son Graeden who was in the audience, explained Bill’s ‘love affair with Ballyshannon’:

“Bill grew up in Wythenshawe, South Manchester as one of four siblings under the care of his parents Frank and Famie. In the late sixties, he married and had three children with Eileen from Tyrone, whom he met whilst she was working as a nurse in Manchester. His love affair with Eileen also led to his love affair with Ireland and as a family we would spend half our annual holidays down on granddad’s farm in Tyrone and the rest at Doctor Boyle’s great house in Ballyshannon.

“Bill and Eileen built their life in Manchester and Bill became a respected local businessman, firstly in the grocery and then in the carpet trade. In his spare time, he always enjoyed playing music in the Irish clubs of Manchester and as he got older started to take the am dram much more seriously. The first play I recall seeing him in was "A streetcar named desire", but being a teenager at the time, I found it all highly embarrassing.6

“Bill retired in his fifties and decided to settle in Donegal, This new quiet life provided him the time to follow his loves of music and theatre more thoroughly, and also gave him a great opportunity to recycle all his old jokes to a new unsuspecting audience. His thrill of being on the stage is perhaps now secondary to the thrill he gets from seeing young talent develop and the initially self conscious blossom in their roles.

“His family are thrilled that the people of Ballyshannon have taken him into their hearts with this award as recognition of his years of hard work within the community.”

A special presentation from festival sponsors, Celtic Weave China, was made by Farrah Bogle, daughter of the late Phonsie Bogle who was a close friend of Bill’s.

Bill returned thanks for the “unexpected” honour and said while he didn’t recognise himself when so many nice things were being said about him, he agreed wholeheartedly with the importance of encouraging young or new people to get involved in drama.

The honour came as a total surprise to Bill, a hard working festival committee member, so much so that when the presentation began, he was about to leave the theatre to check where he had left some of the festival programmes. Ailis McIntyre, however, managed to convince him that he should perhaps stay a little while longer. . .