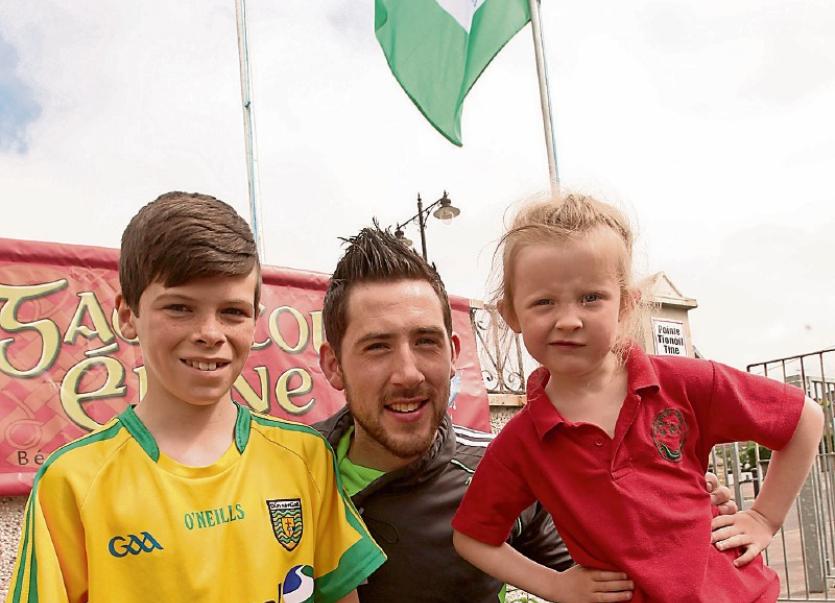 Friday last was a red letter day for Gaeilscoil Éirne in Ballyshannon as they raised their first Green Flag.

With perfect weather, the culmination of two years’ work by the pupils and staff came to fruition as the flag was raised by Donegal GAA county player, Mark McHugh.

Prior to the flag being raised, the pupils performed in front of parents and visitors. Those present were entertained by a very lively and light hearted presentation which underlined the need for conservation.

After the Green Flag was raised, all present were treated to refreshments.

The school, which is place since 2002, has grown from 13 pupils to the present day enrolment of 80.

“It’s an absolutely exceptional day for the school,” said Principal Niamh Nic Dhiarmada, who has been teaching in the school since 2003 and Principal for the past 10 years.

“We have worked so hard over the last two years and I suppose the most important thing was raising awareness about the amount of litter in our own area.

“We were quite shocked with our findings,” said Niamh, who said an action plan was put in place with 4th, 5th and 6th classes under the direction of Maire Ni Gaothain. “Under her direction they came up with a litter reduction plan.”

Visits were undertaken to the Recycling Centre in Laghey and waste management procedures were put in place in each classroom.

Parents also became involved and there were visits from the Ballyshannon Regeneration Group.

“Hopefully the children have brought that message into their own homes and now it has gone from theory to practice,” said Niamh.

“And then we have had a fantastic day today with the raising of the school’s first Green Flag. We are delighted to have Mark McHugh here. It is a great day for all of us,” concluded Niamh.

Pictured: The youngest and oldest pupils at Gaelscoil Eirne, Ballyshannon, Arwen Killalea and Daire Warren, pictured with Donegal senior player Mark McHugh at the raising of their school's Green Flag on Friday.