Read Frank Galligan's It Occurs To Me

Brave Clare holds her own at Glenswilly NS 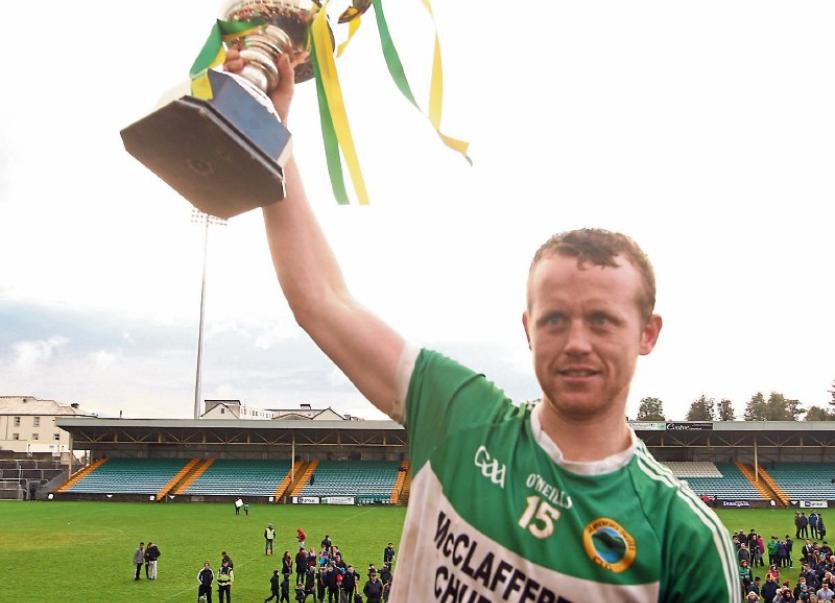 I haven’t as yet had the pleasure of reading Donal Reid’s autobiography but am looking forward to it.

My late father played for Red Hugh’s while stationed in Carrigans in the late 1940’s and one of the highlights of his footballing career was being invited to the 75th anniversary celebrations of the club in 1994, where he met many of his old comrades, including the legendary Gallen brothers. The Killygordon side of 1948 registered the highest score ever in Gaelic football with a score of 14-44 to 0-2 against their neighbours Castlefinn in the Dr McGinley Cup. The great Jackie Noonan scored a total of 7-14 to the score with Kevin Gallen, Peter McGowan, and Collins Lafferty scoring much of the remainder. When dad was transferred to Carrigart in 1957 (where he played with Downings) he replaced Guard Manning, whose wife was a McNelis from Far Straleel. Their son, Aidan who taught in the University of Toronto, is the author of ‘Glencolumbkille, 3000 BC – 1885 AD’, ‘Glencolumbkille, 3000 BC – 1901 AD’, and ‘Donegal Poitin – A History’, and we have corresponded for many years. One of most treasured letters from Aidan is the following:

I was throwing away some papers yesterday and found a Donegal Democrat, dated 25 October of last year, which I must have bought and forgotten to read when I was at home on holiday. In your article, you made a few references to your father and it brought back a lot of memories. I didn't know of Mick's death until I stayed in the Beach Hotel for a night around that time and met some fellows with whom I used to play for Downings and Sheephaven Harps. I met your father only once after he left Carrigart, about thirty years ago in what was then John Maloney's of Carrick. My aunt in Straleel used to refer to Mick sometimes because of your mother's connection with Bogagh but she never mentioned his death.

Mick was nearing the end of his football career when I began to play for Downings. Our longest day was during a torrential downpour in a losing County Junior Final in Ballybofey in 1960, when we formed a midfield partnership against Bundoran. One of Mick's roles that day was as a protector who issued stern warnings to those who felt that the quickest way to put manners on his callow 18-year old partner was to boot him up onto the terracing.

He was a likeable, no-nonsense man, quiet but with a touch of steel that troublemakers detected immediately. He couldn't have been that old when he died. His generosity of spirit and natural decency ensured that his passing saddened a lot more people than just his family. Ar dheis Dé go raibh a anam.

I always intended to tell him (but only when he had left Carrigart) of how he became, for a short time around the beginning of the 1960s, the centre of Barney Gallagher's fixation. Barney was from Carrick (Carrigart). Mick was blissfully unaware of this obsession and probably thought that Gallagher was just an ordinary night cyclist who didn't use a light. There was a bit more to it.

Barney, the "strange" son of "a wild decent family", was always known for steering a conversation to his sole interest - "lampeen rabbits". Then, I came home one term to find that he had another hobby that, for a few months, consumed his every minute. This was devising ways to get revenge on "that ... Galligan!". Barney had bought a "raceen bicycle" (that he affectionately christened "Mambo") and took delight in cycling, at night and without a light, "from Carrick Gap to the Chapel Brae". The animosity directed towards your father was based on Mick's attempts to prevent Gallagher from asserting this "right" and there were a couple of early confrontations where Barney "dodged him wild smart and put the anger well up in him."

For a couple of months, every minute of Barney's day was spent preparing for the night's potential confrontation with Mick. If you met him, he would ask for your forecast of the weather later that night. This affected the kind of wheel he would use - a fixed one for a wet road and a gearshift for dry conditions. Nothing was left to chance. He wore a balaclava before they became popular in the North and a pair of his mother's white cotton gloves that he maintained helped him control the bike through whatever obstacle Mick Galligan threw in his way.

The bicycle received a standard of care that a stealth bomber would get today - oiled daily to eliminate any source of noise that would give advance warning of its arrival.

I have never since seen lower handlebars, their purpose described as, "it's better to have your ass and head on the same level; it gives him notheen t' grip on."

Gallagher also put a lot of thought into tactics and was continually analysing his chosen course. He dismissed out of hand suggestions that he extend this to the Pans near Cranford, because that might involve contact with the Milford squad car, "and them bastards are no' above giveen a man a hideen if he talked thrang to them."

Dark nights were the best because Mick Galligan was sure to be out. If you asked Gallagher about going to a dance on such a night, his answer was scornful: "There's no moon, so ah'm rideen tonight." If you asked why he did it, you were dismissed with a "someone has to do it."

He cycled his chosen route most days during daylight, figuring out avenues of escape. The section between Carrick Gap and Mickey the Tailor's, because the road was wide, was easy meat and a relaxing "windup". The part between Mickey the Tailor's and Manning's Lane was where the adrenaline flowed, because it was on this stretch, between continuous stone walls, that your father was most likely to station himself successfully. The rest of the circuit had its good and bad points and each section had its emergency scenario.

His descriptions of his few direct confrontations with your father were epic: "Ah was rideen low in the saddle and ah seed him before he seed me. Just as ah was cumeen level, he got his bike out a wheen o' feet in front o' him t' block me. Ah eyed a wee gap up on the dake and steered Mambo into it. When ah was fornenst him, ah took a wind with me arm, hit him a skelp on top of the head and sent his hat flyeen." Didn't Galligan give chase? "No, for he would have knowed ah had on a fixed wheel." (I was never able to figure out that one)

When I returned home the next time, Barney had gone to England.

People later saw him on skid row in Kilburn but he never came home again - even for his parents' funerals. I don't know if he is still alive.

...and hear my native news

Although my song is sorrowful, I hope you’ll me excuse

I left my peaceful residence, a foreign land to see

And I bid farewell to Donegal, likewise to Glenswilly.”

Well, despite the defeat by Kilcoo, overall the ‘native news’ has been very good for Glenswilly this year, and I had the pleasure of working with 5th class in the National School recently, where the weans were in mighty form. They were a joy to work with, funny, warm and creative, and helped in great measure by the fact that their teacher, Clare O’Donnell, hails from Ballymoon in Kilcar.

Brave Clare had to endure the class lustily rendering the other Glenswilly anthem, the ‘Copper’ McFadden song but she held her own!

In a school where Neil Gallagher and Michael Murphy, to name but fifteen and more, were educated, my heart was lifted by the buzz throughout the classes, and as for the wee lad who - having been informed that I was Santa’s helper - consoled me by saying: “We have a quare big chimley, sir, you’ll get down no bother”, I’m visiting him first!

“Some stalwart men around me stood, each comrade loyal and true

I said, My fellow countrymen, I hope you’ll soon be free

To raise the flag more proudly o’er the hills of Glenswilly.!