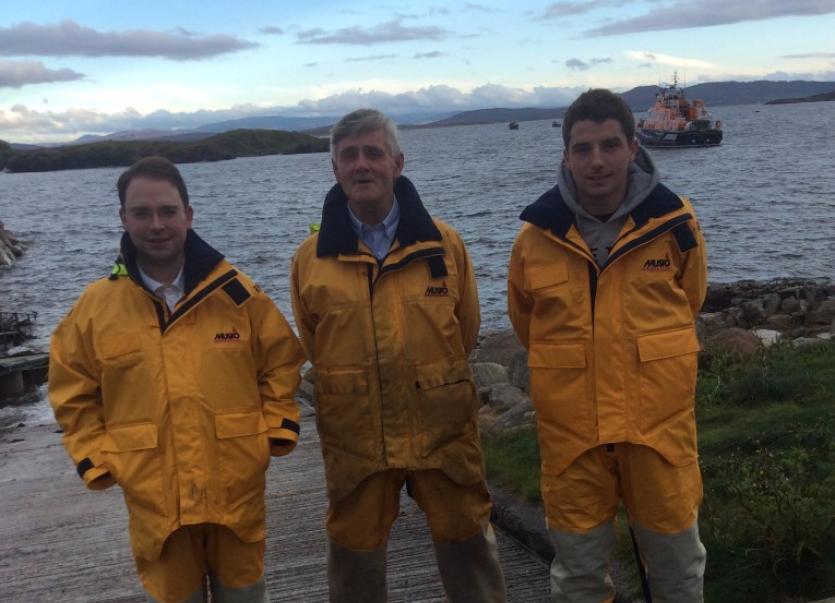 Fr Liam Boyle (left) who has been appointed a crew member of the Arrnamore lifeboat, all with new coxswain Jimmy Early (centre) and new crew member Martin Proctor.

The Arranmore lifeboat has appointed the first priest to join its crew.

Following the recruitment of the first female crew member to join Arranmore RNLI, the station has announced that Fr. Liam Boyle has joined the crew.
Fr Boyle took up the curacy role at Arranmore church in 2015 having served in his first parish in Ardara after ordination for six months.
Fr Liam wanted to integrate into the community and decided the best way he could serve the community outside of his ministerial duties was to join the lifeboat crew.
Fr Liam, who had no previous seafaring experience prior to his RNLI training, said the nearest he ever got to operating a boat was on the pond in Dunlewey in a little tub.
His first call out was to a boat in difficulty at Loughros Point where nerves and any potential seasickness were soon put to one side when the lifeboat approached the casualty vessel and Fr Liam played his role as a crew member in the rescue.
Jimmy Early has taken over as Coxswain of the Arranmore RNLI all-weather lifeboat following 41 years of service.
Jimmy who is just weeks into the job is currently furthering his training at the RNLI College in Poole, Dorset.
Jimmy can recall his first call out 41 years to a medical evacuation from the island when coincidently the patient was the then Coxswain of the lifeboat who had taken ill and had to go to hospital.
At that time it was mainly fishermen who manned the lifeboats and the crew responded to the call on seeing flares and rockets going off to alert the crew.
Today, only 10% of RNLI volunteers come from a maritime background. Potential crew members apply to serve on the lifeboat and have to serve a one year apprenticeship and undergo rigorous training in all aspects of lifeboat disciplines from boat handling, communications and radar to first aid and navigation.
“‘The lifeboats are more efficient now with much more technology in order to provide a faster response to the casualty, so the crew have to be able to manage each call out competently to ensure the best possible outcome. Crews are equipped with the training skills, protective clothing and the best lifeboats to save lives at sea.’
On Arranmore Island, the RNLI has a dedicated crew of 21 volunteers who are equipped with pagers and the necessary skills and training to provide a professional response.
Jimmy can remember the most challenging call out he was involved in back in July 2006.
Sailor Keith White who had the use of only one arm was sailing around the British Isles and Ireland when he got into difficulty in a force 10 gale with 10-12 metre swells 50 miles north west of Arranmore.
It took the lifeboat six hours to reach Keith and get a tow rope on board in order to bring him to safety.
“At one stage a huge swell washed Keith overboard and we thought he was lost,” Jimmy recalled.
“After several minutes the lifeboat crew was both amazed and delighted to see an arm clutching on to the side of the boat. Keith had managed to haul himself back into his boat to the relief and joy of us all on the lifeboat.”
Keith’s boat was towed to safety and finally arrived in Burtonport some 22 hours after the lifeboat was first called. Keith subsequently came back to Arranmore to thank the crew and has since sailed to America.
Another new member of the crew is Martin Proctor who is following the family tradition of serving the lifeboat.
Martin’s father and uncle are both crew members. Martin is studying marine engineering at Cork and comes home as often as possible in order to continue his crew training with the lifeboat.
At present crew are undergoing first aid training with Nick Darlison, a former paramedic with the NHS and now a first aid tutor from the RNLI.
In keeping with the Arranmore community and family tradition of crewing the lifeboat, many of the crew have relatives serving on the lifeboat.
Jimmy’s son Lee is the second coxswain while mechanic, Philip McCauley’s grandfather and uncles were all members of the crew.
Former crew members have returned to the crew years after spending time in England working as Tunnel Tigers. Crew member John Mc Hugh returned home two years ago and promptly re-joined the lifeboat. John served his one year apprenticeship and is now a fully-fledged lifeboat man.