Flight of Earls remembered in Donegal

Lough Eske, just three miles from Donegal Town ranks among one of the most scenic areas in our country 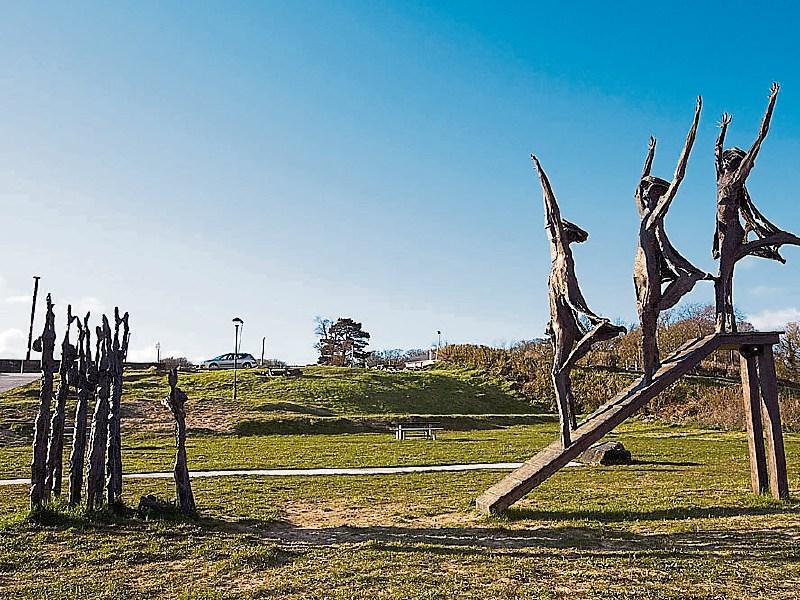 The Flight of the Earls statues in Rathmullan

Lough Eske, just three miles from Donegal Town ranks among one of the most scenic areas in our country.

The lake is about 900 acres in size and is surrounded to the north, east and west by the Bluestack Mountains. The rivers Clashalbin, Lowerymore, Clady and Corabber flow into it, while the Eske flows out.

The area is also steeped in history, the now demolished 1600’s Franciscan Friary, the 1400’s rapidly deteriorating O’Donnell Castle,a building which as Donegal people, we are inclined to forget about. My reason in flippantly stating the latter is the fact that in September 1607, with English forces rapidly advancing, Earl of Tirchonaill Rory O’Donnell and entourage fled his Lough Eske castle, through Barnesmore Gap to Rathmullan where he met with Hugh O’Neill, Earl of Tyrone and Cuchonnacht Maguire, Earl of Fermanagh. Along with 96 other followers and crew, on the September

1607 set sail for Spain. This ‘Flight of Earls’ saw the demise of our Gaelic ‘way of life’. And so this area of Lough Eske has lain there over the centuries, with no visible landmark anywhere to signify this important event in our nation’s history. On the September 14th, 2007 to commemorate the 400th anniversary of the ‘Flight’, Donegal’s Bluestack Ramblers Walking Club did a three day hike from Donegal Town over the Bluestack Mountains, camping out on ‘Cark Mountain’, Cloghan. At 2.30pm on Sunday, December 4th, 2016, at the ‘Famine Pot’ car park Lough Eske, Bluestack Ramblers member, Alan Slane from Armagh, will unveil a specially commissioned Mountcharles sandstone plinth engraved by well known Donegal stonemason, Michael McGroarty. Members of the public are invited to the unveiling ceremony only, at 2.30pm.

I often wonder does any of our senior politicians in government really care about the welfare of our senior citizens. When you arrive at your mid sixties, you are made retire from work, granted an ‘old age’ pension, which is great, but sees a tremendous drop in your weekly income. Also, sadly in old age, the body starts to react, heart, hips, knees, back, stomach etc, etc and suddenly you have pains here, there and everywhere. Not only that, but then you have to do a ‘Houdini act’, paying outgoing weekly/monthly bills, groceries, central heating oil, house maintenance, ‘rising’ house and car insurance/tax, medical fees, prescriptions. And if, unfortunately, you have to be hospitalised or seek a consultant, the first question you are asked is 'have you medical insurance?'.

Last week I received the 2017 statement - for €2506.15 – that is 50 euro a week. I immediately called VHI for an explanation, they said “we are being charged €800 a night for a public hospital bed”. So they have to pass it on to me, also plus the €250 annual excess which you are also responsible for!

It’s no wonder that there are 35 private hospitals in a small 26 county country such as ours –‘it’s a cash cow’. Does our Minister for Health or any of the senior politicians care about upgrading our current health system or looking after the needs of senior citizens– obviously not!

I must give heartfelt thanks to regular ‘Muses’ reader, Charles Breslin, ‘The Old Boathouse’, Bunbeg Harbour, for his recent letter on my piece on the death of Michael Collins at Beal na mBlath Cork and his kind words. Charles is very well read on historical information relating to our nation’s history, which I really appreciate receiving. Long may it continue.