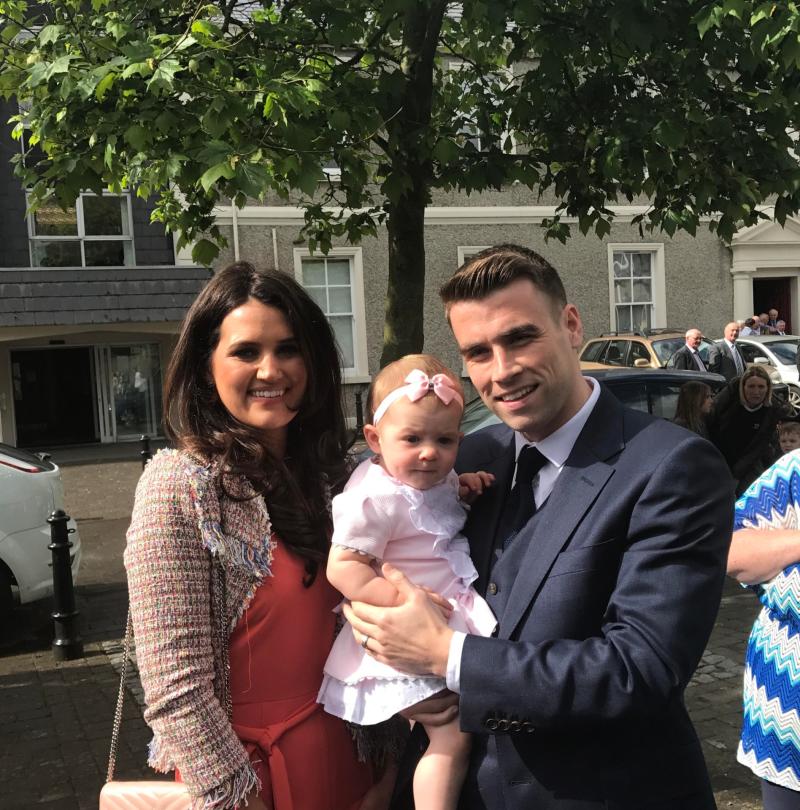 Seamus Coleman with his wife Rachel and daughter Lily.

Republic of Ireland captain Seamus Coleman has said he was shocked by the of receiving the Freedom of Donegal.
The Killybegs man was bestowed with the this afternoon, Friday, in a ceremony in County House in Lifford.
The Everton fullback was joined by his wife, Rachael, baby daughter, Lily, parents Moyra and Henry, brothers Francis and Stephen as well as family and friends from his .
Addressing the reception, an emotional Coleman said receiving the Freedom of the County was “a massive ”.
“Receiving this is something I am shocked by, but something I am very, very proud of,” he said.
“Being from Donegal means so much to me and being from Killybegs means so much to me. Home is where the heart is for me and I have made no secret that when I finish football, home is where I will end up.”
Referring to praise for how he conducts himself with fans, Coleman said: “That’s the way I was brought up by my and dad. There is no secret to it. I was taught from a very early age to say please and thank you, and that goes a long way and I have brought that everywhere with me and it has done me well.”
He also thanked his wife, Rachel, for supporting him.
“Everyone sees the good stuff but there are times when it has not been so good.”
A five-minute video of career highlights was shown in front of the packed council chamber and Coleman said he enjoyed it as he rarely takes the chance to look back at what he has achieved.
He said the reason he does not look back is “I am hungry to keep going and keep succeeding."
The 40-times capped player is recovering from the horrific leg fracture he received in the World Cup qualifier against Wales in Dublin on March 24th.
The former Sligo Rovers and St Catherine’s player spent some time at home in Killybegs recovering from the injury and was visited by Everton manager Ronald Koeman and club captain Phil Jagielka during his convalescence in Donegal.
He received a loud cheer from the chamber when he said: “There is absolutely no doubt about it, I will be back to where I was.”
He added: “I want to continue to work hard and do the best I can and make my family and everyone in Donegal proud.”
He was presented with a badge and pin by Cathaoirleach Terence Slowey.
“You are an inspirational person and a man that never forgets his roots,” Cllr Slowey said. “You are a modest and humble man, a person who always has time to talk to your supports, and especially the children and young people who look up to you.”
Chief Executive of the council, Seamus Neely, said the presentation was a very special day for the soccer community in Donegal. He said Coleman can often be seen along the touchline at matches around the . “The example he has shown will inspire many of our young people,” he said.
Representatives of the different political groupings congratulated Coleman on the and paid tribute to him.