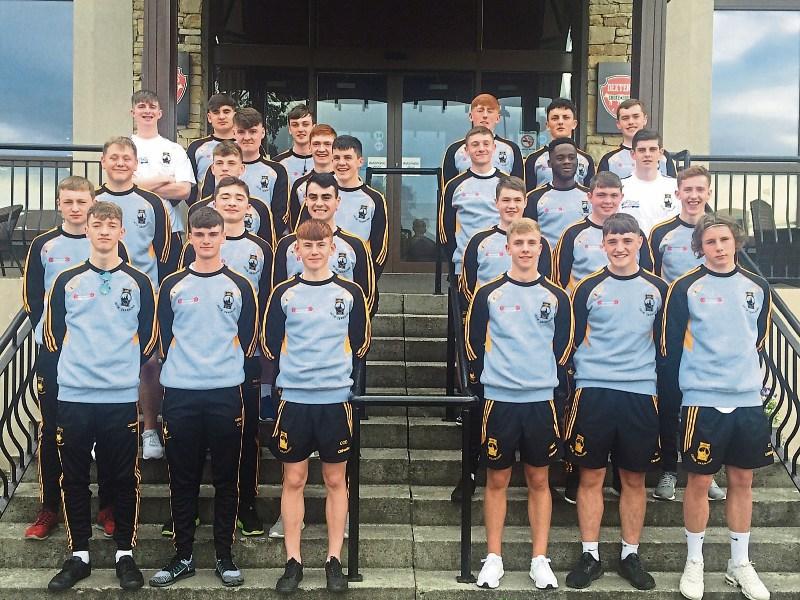 They will play All-Star teams from New York and the North American All-Star team in both football and hurling.

They will be the first team from Ireland ever to compete at the tournament known as the CYC’s that was introduced by the North American Board in 2004 and moves around to a different host city each year. Last year’s event was in Chicago and this year will mark the first time that the CYC’s have moved outside of the major GAA stronghold cities such as New York, Boston, Philadelphia, Chicago and San Francisco.

The St. Eunan’s team is managed by Brian McGeehin and Paul McGovern and they are looking forward to the trip.

“We hope firstly that it is a great experience for the boys that will make memories for them that will last a lifetime and hopefully they will be talking about their trip to Buffalo for many years to come. They’re a great bunch of lads and we hope that they can make their town, club and families proud,” said McGeehin. Brian continued, “It’s a tremendous honour for our players and club to be the first Irish team to ever travel to the CYC’s and hopefully the boys can give a good account of themselves and take in a little bit of sightseeing too. We are planning a trip up to Niagara Falls and that should be one of the highlights of our trip.

St. Eunan’s haven’t received their schedule of games yet and once they have that they will finalise the details of their schedule. With temperatures set to be 30° C+ there will be some adapting required for the players. “It’s going to be a lot warmer than we’re used to certainly” said McGovern “so we’ll be monitoring their hydration throughout. We plan to get a couple of training sessions in at a local school in the days leading up to the tournament to help the boys adapt to the heat and humidity and we’ll have recovery sessions in the hotel swimming pool after training. We aren’t sure of the schedule yet and we are also playing hurling while we’re there so we’ll have to manage it as best as we can, we’re taking 28 players with us – many of whom are dual players so it means we’ll get everyone game time while we’re there. Hopefully our games will be in the evening when it’s a little bit cooler.”

So how did their dream trip come about? “I was sitting watching the All-Ireland Club Final on St. Patrick’s Day when I got a text from a contact in Philadelphia asking if St. Eunan’s would be interested in coming out in July. I initially dismissed it thinking we wouldn’t have enough time to raise the money. Two days later Liam Hegarty – who has connections to Donegal Town - rang me and told me a little bit about the CYC’s – it’s the largest gathering of Gaelic Games outside of Ireland – and said the organising committee would give us $5,000 towards our cost. We set a deadline for ourselves of one month to see if we could raise the funds and so that if we couldn’t travel they might still be able to get a team out. Luckily, we received great support and we were able to make it happen,” Paul concluded.

Part of their trip will be spent trying to convince North American clubs to come and visit Donegal annually and they have printed a brochure showing all Donegal has to offer for Gaelic Games and for tourists along the Wild Atlantic Way. They will have a stall set up for the duration of the tournament with club members there to talk to clubs from North America about coming to Donegal from the summer of 2018.