Inspiring story urges people to pursue fitness regardless of their age 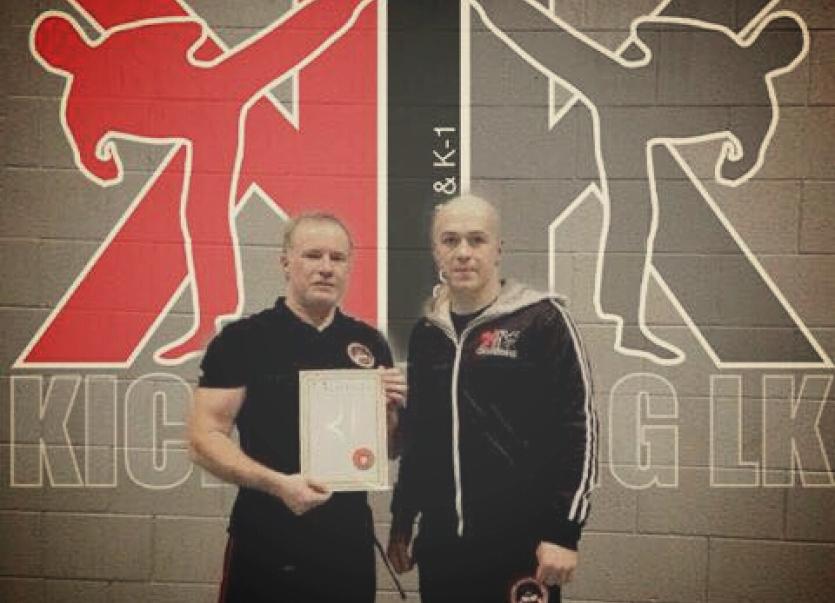 Originally from Leeds, Jimmy McCarthy moved to Glenfinn twenty three years ago and now works in Letterkenny. A number of years ago, Jimmy turned 40 and decided that he wanted to do something different to mark this event in his life.

This is his story:

"A number of years ago, after my 40th birthday, I decided that I wanted to do something completely off-the-wall, maybe plan to climb a mountain or train to run a marathon, something to show that age is only a number.

"Nine years ago I was flicking through the Donegal Democrat and noticed that a new kickboxing for beginners class was about to begin in Letterkenny. That was it. I was going to join a martial arts school and go all the way through the different level belts - all the way up to black belt. I recall dialing the phone number and speaking to Tommy McCafferty, who is the head coach and owner of KickboxingLK, and being asked to come along.

The first step - a daunting task

"That Tuesday night walking into the class was daunting. This is why I understand how difficult it is for anyone to take that first step. I always help anyone coming along to the club on their first night. That in itself is a huge psychological step with many backing out just before entering through the door.

"I joined up and was completely bitten by the martial arts bug and throughout the early years loved it with a passion. I enjoyed the buzz of going through the grading for belts and the work that this involved.

The challenges of an amazing journey

"It's been an amazing journey. At one point, I almost quit between my brown belt and black belt. I would finish work and go home and make excuses, saying that training had been canceled or 'I'll get back to it next week' or 'I couldn't be bothered anymore.'

"I'd show up for training one night and after that I could miss the next few sessions. I knew through the excuses I was letting my wife and daughters down. They questioned why I wasn't going to training and never once complained throughout the years of my kickboxing about the missing school plays, getting home late from training and many other family obligations. Deep down I was so annoyed with myself.

"About a month into self pity I received a message from Tommy asking if I was coming back to training. "You have come so far," the text read. After exchanging a few messages I told him I'd be back for the next training session and would get my black belt.

"Training was excellent and after a few weeks I was not only back into the swing of things but physically felt better than ever.

Tough competition as grading for black belts hits the horizon

"Two years of training the word filtered through that grading for brown and black belts were on the horizon and Tommy would be putting forward a few club members to grade up in Lurgan, Northern Ireland. Other clubs from the north would also be sending members.

"Three months to grading we were told we needed to put in extra work as the grading would last six hours. We learnt that some of the members from other clubs who were also grading were from across Europe. Members from Ireland, the UK and European Kickboxing title holders were also going to be graded but this gave us the extra incentive to train harder.

"This meant three months of extra sparring sessions, training before work and up to 4 hours training after work. The date for grading was the 13th January, 2018 we were told.

"The week leading up to Saturday consisted of nights of unrest and not sleeping well. Everything was going through my head, was I fit enough?  Have I done enough training? Where's my gum shield? I was hoping I wouldn't get the dreaded flu.

"My wife and daughters were amazing. Carmel made sure my diet was correct, the conservatory was turned into a gym, my twelve-year-old daughter Katie invited me into the world of Spotify when I was running.

"Words of encouragement were printed off and placed on the walls. My Carmel gave me encouragement telling me that I could achieve what I wanted to achieve. My daughters Chloe, Serena and Katie cooked a lovely steak dinner the night before grading.

Going from Brown belt to black

"Six of us from the club were going to be graded. Four were going for brown belts and two going for black belt. During the final training session, Tommy called us together and said: "That's it. No more training. Take Friday to rest and relax before Saturday."

"Saturday morning of grading I was buzzing. Had I packed everything? If I forget something important like shin-guards or a mouth-guard I wouldn't be allowed to grade. We travelled up to Lurgan in two cars.

"Our  coach, Tommy kept telling us ‘no matter how tough it gets, do not give up. We are representing KickboxingLK and go in with the upmost confidence’. I couldn't have asked to be heading to Lurgan with a better group of people from the club all willing each other on.

"Grading was tough and lasted just under six hours. I won't elaborate too much as it wouldn't be fair on others going on to grade. After only 15 minutes in we were all gasping and trying to get our breath wondering how we would last another 5 hours 45 minutes. We were soon put at ease when the judge's told us this is nervousness and this would pass.

"Grading is designed to test you both physically and mentally as well as techniques, fitness and sparring. Tommy knew I was getting it tough about 4 hours in. The cramps in the backs of my legs, my ribs were on fire - even though I had worked on blotting out pain - and now I had 20 rounds of sparring with different opponents ahead of me. I was completely shot. I had given it my all and was exhausted both mentally and physically.

Digging deep and heading towards the end line

"At the 17th round of sparring I was digging deep and feeling physically sick. This was the part that tested you how much you wanted that black belt. The thoughts of that black belt and going back to my family spurred me on. Not only that but I was representing the club and I wasn't going back having failed.

"Between rounds was spent trying to relieve the cramps. Twentieth round and grading was over. I was so exhausted I didn't know if I had done enough. I was annoyed with myself because I felt I had taken kicks and punches I should have defended.

"I felt my combinations should have been better. We were called together and congratulated. I had done it. I was told I had passed the grading. Tommy presented me with my black belt and gave me that look of 'you done it'. He knew, as did my closest family and friends, what this belt meant to me. Only these people understood the training. They understood the dietary discipline and the manner in which you lead your life as a result of it.

"On the drive back to Glenfinn, the thought of walking in the door and sharing my moment ran through my mind. It was a thought that had run through my head for years and now it was becoming a reality.  The messages that I have received congratulating me have been humbling.

Thanking everyone who helped during the journey

"Thank you to each and every member of KickboxingLK - an amazing club and bunch of people. Thanks to all those both in training and sparring who have given, even the smallest piece of advice. Most of all thank you to my wife Carmel and daughters, Chloe, Serena, Katie - I could not have done this without you.

"And thank you to my head coach, and good friend, Tommy 'The Ghost" McCafferty for all the training, tips and advice throughout the years. I'm proud that KickboxingLK is now in it's tenth year and I have been with it every step of the way and watched it grow to the the huge success it is today.

"I am so extremely passionate about exercising and the positive effects it has on your body and mind and it makes no difference what age you are. I am employed by Optum / UnitedHealth Group. I use the positiveness of martial art every day at work to do my very best.

"I encourage any person that wants to get fitter to take that first step. I push and promote KickboxingLK to others as I know first hand how it improves your health and fitness whilst learning a Martial Art.

"I'm 50 years old and am in the best shape of my life. It’s a tough but amazing journey and If I can do this...so can you!! KickboxingLK train in the Aura Leisure Center every Tuesday and Thursday evening under owner and head-coach Tommy 'The Ghost' McCafferty.

If you are interested in coming along check them out at Facebook.com/KickboxingLK. Beginners are always welcome.

Belts are not given lightly...They are earned!