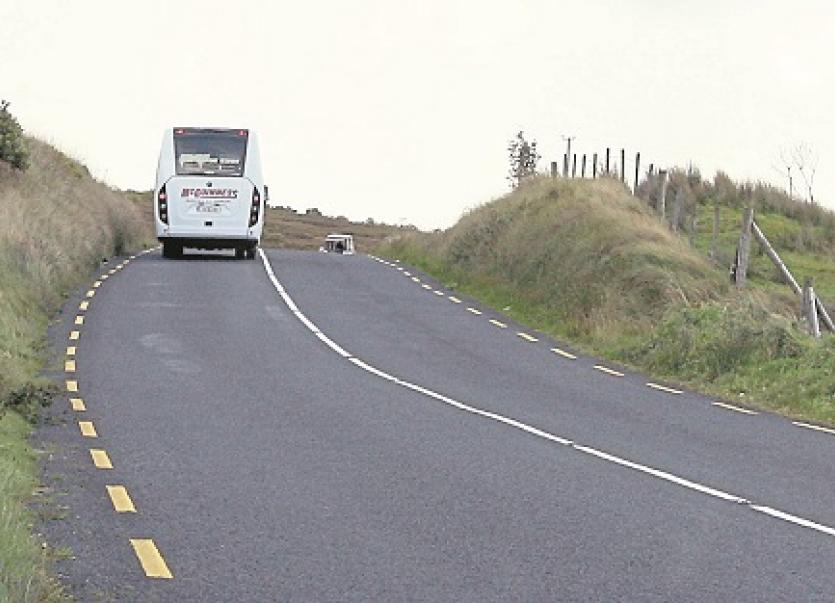 A further call has been made for upgrading of the R232 between Pettigo and Laghey.

One of the main roads into south Donegal is so bad that two lorries can’t pass at the same time it has been claimed.
The claim was made during a plea for further investment for the Pettigo road to help the economic and tourism development of south Donegal.
Funding in the region of £210,000 has been allocated for maintenance on the R232 which links south Donegal to Fermanagh from Laghey.
Cllr Michéal Naughton told the Donegal Municipal District meeting on Tuesday that while he welcomed the allocation, which is about three times what the road normally gets annually, it is a “drop in the ocean,” compared to what is required to bring the road up to standard.
“This is the main strategic link between south Donegal and Northern Ireland then on to Dublin,” he said.
“The road is a regional road and it should be upgraded to a national secondary route. The funding is nowhere near what is required for the road which is the main strategic link between here and Northern Ireland, and on to Dublin airport and Dublin port and to Belfast airport and Belfast port.
“This connects into Cavan and right down. You come to Pettigo and if you are stuck behind a bus or a lorry - this is the main road into our county.”
The Fianna Fáil councillor said the road is so bad that visitors to the county believe their sat nav has taken them on the wrong road when they are travelling between Pettigo and Laghey.
“For tourism this road is vital to say the least,” he added.
The road is also vital to the development of Killybegs as a port, he said.
“This road is very busy with articulated lorries. If two lorries meet they have to stop because of the wing mirrors. Killybegs is developing but this is the road that articulated lorries have to use to get to Killybegs, which is not just the main fishing port in Donegal, but the whole country.”
Cllr Naughton proposed that the council sends a deputation to meet the minister for transport to make a case for extra funding or the upgrading of the road.